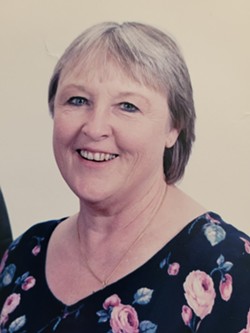 Athleen Grace Baker passed away November 3, 2021 in McKinleyville at the age of 73. Athleen, herself, wrote the following on November 24, 2013, noting additions to her family along the way.

I’m writing this myself in preparation for the inevitable!  It also saves my family from this chore.

I have had a good life!  Starting in San Angelo, Texas, where I was born on June 1, 1948, to Levi Freeman Boatright, Jr. And Alvina Clara Grace Boatright.  My one and only sibling is my younger brother, Gary Levi Boatright.  Dad was from San Angelo so that’s how that happened.  Mom was from Portland, Oregon area, but had some family in Eureka.

Mom and Dad settled in Humboldt County in 1955 after several moves across country from Texas to Oregon and California.  My first grade year was spent at Adams School in Eugene, Oregon.  I attended Janes School (now Pacific Union) in Arcata for my second and third grade year.  My parents relocated to McKinleyville.  I graduated from McKinleyville High School in 1966, and attended one year at Humboldt State College.  I took a C/R Accounting class my high school senior year, and attended various C/R classes during my early adult life.

It seems I’ve always worked.  I babysat in my early teens, buying my own school clothes.  At 16, I began working as office help on weekends for Humboldt Trap and Skeet Club, which lasted two years.  I worked part time on week days for a local State Farm office as a high school senior and HSC freshman.  After that, I found full-time employment in Montgomery Ward’s credit department for four months.  I was then hired by the Department of Social Services in 1967 where I worked for the next 39 years.  I spent the first six months as a Clerk Typist, moved into an Account Clerk position for 2 ½ years, then advanced to an Eligibility Worker I, II, and III.  I ended the last 22 years of my career as an Eligibility Supervisor.

I enjoyed volunteer work.  My first experience was as a candy striper at the old General Hospital.  I served as a Hospice bereavement volunteer for one year.  In 1990, my good friend, Lynn McKenna, encouraged me to become involved in the annual Jazz Festival, a few seasons of the Harley Run, and the Blues-By-The-Bay Fesitval.  I also volunteered in the second grade classroom for my youngest grandson, Jesse.

I married David G. Wildmark in 1970. We had two sons, and divorced in 1988. I began dating Scott R. Baker in 1994.  We met dancing, and he asked me out for a first date on Valentine’s Day.  We spent many weekends dancing, listening to music, and just being together in those first years.  We even took dancing lessons at one point.  I moved in with Scott in the Spring of 2002, and together we have been since.

My heart has been with my family, whom I have treasured.  I love both my sons so much, tried to raise them with what I thought was good, and tried to help where I could as adults.  I hope that my flaws will be overshadowed by my heart.  I have been blessed with the same wonderful privilege that my mother and grandmother had of taking care of grandchildren.  I took care of my three granddaughters Cora, Karly, and Taresa part time while their parents worked.  I got to be with my oldest grandson, Brandon, a lot in his preschool and early school years.  Jesse lived with us for five months at one point, and has spent many weekends with us along with his sister, Harmony.  My grandchildren are special, and I have enjoyed every moment with each of them.  I visited mama a lot in her four-year stay at Seaview, assisted Dad with his at-home care, and spent many hours with him in his four-year stay at Granada.  I feel I was a good daughter.  And as the saying goes to my brother: I smile because I’m your sister, and I laugh because there’s nothing you can do about it.  You’re stuck with me.  I love you.

I have been blessed with Scott’s love of home.  He has been the one who has tended to the majority of household chores and things around the house (chore boy!).  And to his continued disbelief, I have seldom understood the punch line of a joke.  It has become a running laugh of how he has been the lucky one – lucky to have me!  We have had a good relationship, one that fits, and one with love and friendship.

I have enjoyed so many friendships.  A few years after being retired, by good friend, Linda, retired.  We’ve enjoyed many morning walks, silly/serious chats, tea at the local establishments, and movies.  Lunch dates with Sally and JoAnn; trading occasional plants and meeting for breakfast/lunch with Joan; tea and freshly baked cookies with Mary at her house; and volunteer work and occasional concerts with Lynn.  I hope I have been a good friend.

Around the age of 50, I gradually began relying more in my faith.  God’s grace and kindness, His mercies and little miracles, and the small day-to-day joys.  I have had a close relationship with my cousin, Rachel.  The two of us spent time together in our youth, and created memories back then, such as when I taught Rachel to drive a stick shift in my 1968 Camaro.  Later in life, when that relationship was renewed, Rachel became a lovely encourager for me.  And I’m thankful for the prayers and encouragement of my brother, Gary Levi, and sisters-in-law, Asia and Melissa.

I have always liked being out of the house, usually going somewhere and doing something; like movies at the theater, walking, reading my books and drinking ice tea at fast foods, meeting friends, shopping at K-Mart and The Children’s Place, being with my dog, and of course, being with my grandkids [and great-grandkids].  I have never been much of a sit-at-home person.  I have enjoyed working with my perennials and bulbs during the spring and summer, watching the birds at my feeders and birdhouses, taking pictures, sharing books, talking on the phone, playing games and emailing.  I have always loved Christmas and birthdays!  I love the music, the tree, my Christmas village, the presents, the children, the season.

Scott and I have enjoyed motels, camping with my little Scamp trailer, and occasional travel; the Oregon State Parks, the Brookings/Gold Beach area, Grants Pass, and short trips to Santa Rosa to visit Scott’s sister.  We once took a road trip that covered ten states.  At age 59, I took a five week road trip by myself that encompassed seven states, visiting relatives, staying in motels, sending postcards, and gathering souvenirs.  During that trip, both Scott and my brother checked in on me daily regarding my progress and adventures.

This pretty much sums up the highlights of my life.  I join my son, parents and grandparents, a few cousins and friends, and many aunts and uncles.  To my wonderful family and friends, I want to say how much I have loved you and thank you for the joys you have given me in life.  We’ll see each other again.

(Friends are invited to attend services on December 11 at 2 p.m. at the Church of God, located at 1470 Santa Clara Street, Eureka, California.)