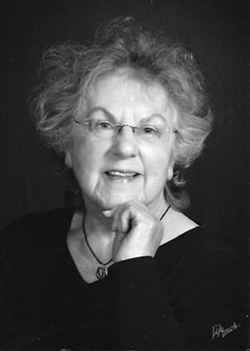 Maxine Anderson Freson passed on December 4th, 2021 at her home in Tigard surrounded by her loving family.

Maxine was born and raised in the small town of Ferndale, California, to Harry, a dairy farmer, and Jane, a registered nurse. She thrived in the small community with her siblings, family and friends. She was an accomplished equestrian who loved the outdoors, her farm and idyllic hometown.

After graduation she started her career at the Bank of America where she worked until meeting her husband, Frank Gino Freson. The two married on Easter Sunday March 29, 1959. After moving to Oregon in 1968, the pair eventually settled in Newport in 1975 where they raised their four daughters.

Gino and Max opened Gino’s Seafood and Deli, a successful waterfront business in 1982. They worked together at the popular establishment until Gino’s death in 2012.

Maxine is preceded in death by her husband Gino, her three siblings and parents. She is survived by her four daughters: Michel (Brian), Dani (Bill), Peri (Furl) and Nicole, six grandsons and two granddaughters. June services are planned at Sacred Heart Catholic Church in Newport.

Arrangements by Bateman Funeral Homes in Newport. Memorial donations can be made in her honor to Sacred Heart Catholic Church
Prev
Next