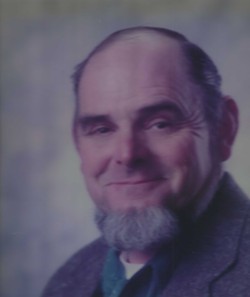 Bruce Miller, born July 10, 1943, in Missoula, Montana, was a man with a lot of passion and strength. He fought off two bouts of cancer – 2004 (throat), and 2018 (bladder). His third bout with esophagus cancer took his strength and his life. Bruce went to his heaven peacefully on Easter Sunday. His last clear words spoken were, “Alexa. Shut me down.” His wish was granted prior to midnight April 17, 2022.

At Dunsmuir, Bruce attended kindergarten in the office of the housing project where they lived. He was not the easiest child to nurture — always into mischief in school that drove the teachers wild. His dog always followed him to school. His mother was called in for a conference. The teacher said it was okay for his dog to stay, but Bruce was the problem. She needed help with how to handle him. His Dad called him “bucket head” a nickname that stuck in the family.

At the age of 7 Bruce lost his father in a railroad accident. The family moved to Gerber where Bruce attended Gerber grammar school and participated in 4-H and other youth activities. He had a pig called Lila. Bruce attended Los Molinos High School where he was active in FFA with a pig called Elvis. Living in the country Bruce was able to get a driver’s license at 14 ½ years of age.

Bruce nearly didn’t graduate high school as he’d thrown the janitor’s broom up in a tree. His Mom was called to school again. After thinking about it, Bruce was allowed to graduate as the teachers dreaded the thought of him returning the following year. Reluctantly, his mother signed for Bruce to join the U.S. Navy after high school at the age of 17 as he planned to join anyway on his 18th birthday. By joining at 17 he served the minority cruise of a three-year stint instead of four years. He was proud of this military service that opened his eyes to travel. Bruce sailed on the U.S.S. Midway aircraft carrier to Hawaii, Philippines, and Japan.

Four months out of the Navy found Bruce attending Shasta College under the GI bill and working at U.S. Plywood in Anderson, California. He and a friend Garnett decided to take a weekend trip to the coast where he met Rowetta Stapp. They were attracted to each other, discovered their love for dance, and after that first wild weekend together their love blossomed into a marriage on August 7, 1965.

Bruce moved to Eureka and worked in the woods as a choker setter for a short time prior to beginning work during the startup of the pulp mill in Samoa. He worked 30 days straight after their wedding. Bruce and Rowetta’s first home was a 40-foot trailer until they moved to Redding in 1966 where Bruce returned to Shasta College. They moved from Redding to Shingletown and Bruce drove the school bus from Viola to Redding, attended college during the day, and drove the school bus home in the afternoon. He graduated in 1968 when his oldest son Chad was a week old.

To continue his education, Bruce’s family moved back to Humboldt County where Bruce enrolled at Humboldt State University. He drove a school bus, attended college during the day, and graduated in 1970 — the year his second son Jason was born. Bruce drove a water truck for Simpson Timber during the summer. His third son Cedric was born the year Bruce received his teaching credential in 1972.

Bruce decided teaching was not for him. He loved being a heavy equipment operator, and he took pride in driving the road grader for Simpson/Green Diamond where he had worked for over 40 years prior to his retirement in 2011. When Rowetta’s parents passed, Bruce and Rowetta were able to take on the work of the homestead in Showers Pass known as Bootjack Timber.

After living in a doublewide mobile for 9 ½ years, and raising three sons, more space was needed. Good spirits followed Bruce and Rowetta as they discovered the ideal Fieldbrook property in 1976 that was for sale. They had a home built and became active in the community. Bruce was a 4-H leader for over 25 years. Swine and fairs were his specialties. He began what’s known as the Pig-Out Ranch and raised pigs for many years.

He was active in a variety of his sons’ activities including 4-H, FFA, soccer, football, baseball, basketball, drama and wrestling. Later, he loved attending the HSU girls’ softball games. Sons being off to college out of the area, and in other countries, creating more places to travel. Many trips were taken.

Bruce’s life never slowed with his travels to see the world. Alaska was the first of many cruises. Bruce liked unpacking only once until his last cruise when Rowetta became ill and they were put off the ship in Brazil. Bruce was up all night packing all the suitcases. Bruce with his iPad was able to communicate from Brazil to make arrangements to get them home after a week’s stay in the hospital and hotel where the Tapajos River meets the Amazon.

COVID canceled trips to Tahiti, Iceland, and a family trip to Alaska. One can’t ask for a better travel partner than Bruce as he’s always aware of what was going on around him — perhaps from the Navy training and his traveling experiences.

Bruce is survived by his loving wife and dancing partner Rowetta Faye Stapp Miller and their three sons Chad Alton (Lynette), Jason Devoe (Holly), and Cedric Garth (Rachel). He is also survived by a brother Chip Miller (Bonney), and a sister Perdita Miller (Don Timmons). Bruce’s grandchildren that survive him are Sadie Isabel, Sophie Jean, Liam Matthew, and Jade Emily; sister-in-laws Tanya Currier (Gene) and Anita Diaz; brothers-in-laws Aron Stapp and Brian Stapp (Karen); and many cousins, nephews, nieces, too numerous to mention for fear of leaving one out.

Bruce was respected for all the time he gave to youth in sports and as a leader in raising pigs for 4-H and FFA members. He had such a family and community spirit, doing everything with so much heart. Bruce was a kind man, husband and community-oriented person who went out of his way to help everyone he knew.

He desired to have his love and thanks expressed to all the great nurses and doctors who saw him through difficult times over the last two years. Special thanks to Hospice for the guidance of volunteers both day and night.

Bruce and Rowetta’s last dance together was at the Fieldbrook Market & Eatery located in the community they hold dear in their hearts. Bruce’s family was with him at home on Easter Sunday where he had a peaceful and fitting send off. Bruce lived life to the fullest and accumulated so many friends along the way.

Near the end, Bruce wished for a celebration of life, “I’d like a Wake while I’m awake — or not.” This celebration of his life will be at the Moose Lodge in Eureka on the afternoon of July 10, 2022. It would have been his 79th birthday. Family and friends are invited to join the festivities and perhaps share a story or two, drink a toast to a life well-lived, enjoy food and music, and reacquaint with family and friends.

Memorial contributions can be made to a Cancer association, the Alzheimer’s group “Fieldbrook Friends Forever,” charity of your choice, or the non-profit Fieldbrook Community Club that Bruce worked diligently for as Grange Master and community member for over 41 years helping to keep the hall open for use by the Fieldbrook community.
Prev
Next