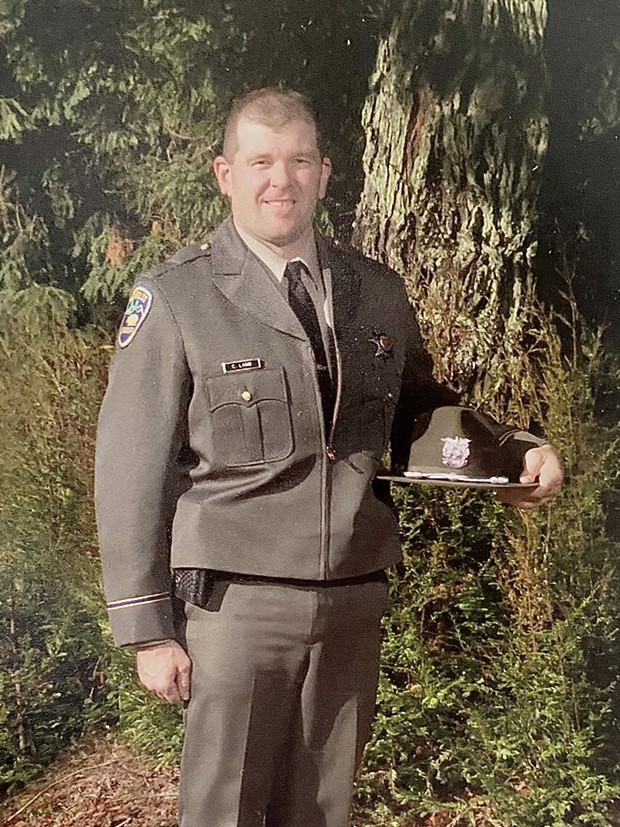 Delbert "Charlie" was born July 27, 1969 in Redding, California, and died at age 53 in August of 2022. He was named after his grandfather Delbert and great-grandfather Charlie. However, there were three Delberts in the family already that lived within three blocks so he immediately became Charlie to everyone.

Charlie graduated Happy Valley Elementary School in 1983, and West Valley High School in Anderson in 1987. Charlie attended Humboldt State University (now Cal Poly) in 1988, where he was on the basketball team as a red shirt player. He returned to Redding to attend Shasta College in 1989, where he played the center on the Knights Basketball Team. He returned to Eureka in 1990 and went to work at a mill in Samoa, working there for 10 years pulling green chain.

In 2000, Charlie applied and joined the Humboldt County Sheriff’s Office. After serving as a correction officer in the jail for four years Charlie attended the Police Academy at College of the Redwoods, graduating second in his class. Upon finishing the academy he was promoted, and went to work patrolling the county. He patrolled the entire county, Trinidad, Hoopa, Alderpoint, Bridgeville, Garberville and Shelter Cove. Charlie truly believed the motto of "to Serve and Protect" and was proud of the knowledge he gathered about the roads and ways of the county. He always shared this knowledge and investigative techniques with any of the other law enforcement people in the county. During the 20 years he was an officer he was chosen Sheriff’s Deputy of the Year three times. He was so humble and modest, many people and even family members never knew that. Charlie still enjoyed serving and protecting the peoples of the county that he met until 2021, when he took a medical retirement.

As a sheriff’s deputy, Charlie excelled personally and professionally. He was the epitome of integrity, loyalty, and honesty. He had a positive impact on every life he touched. He had a great sense of humor, his smile was infectious and made people smile even if they were having a bad day. In life and on the job, Charlie always listened to both sides of a situation. He gave people the benefit of doubt, but always verified the facts. He didn't look for the bad in people, but tried to find the good. This attitude led to people trusting him as he always told them what was going to happen. His honest and open communication was known by the people he met in the performance of his job.

When Charlie was diagnosed with stage 4 Non Hodgkins Lymphoma in March 2017, he fought for his life in Palo Alto at Stanford Hospital, undergoing massive infusions of chemotherapy chemicals in a new experimental method of bone marrow transplant. After 7 months all the tumors but one was gone. Stanford was going to start an even newer experimental treatment to destroy the last tumor. But the day before Thanksgiving Charlie got a call that he could not be put into the new treatment because the last tumor was gone. The prayers of family and friends for Charlie were answered. Even with the knowledge the cancer could return at any time, Charlie returned to work as a sheriff deputy until 2021, when he felt he had to retire.

Charlie played basketball all the years he lived in Eureka. He was a tough opponent on the boards, but immediately a friend after the game. He tutored players on any team and was his team's coach by default. After all, he had played in high school and college and on the street, let alone being the big center at 6'8" and over 200 lbs. and had a real talent. He enjoyed every minute of his hobby and all the boys and men he played with.

Upon retiring, Charlie moved to Nampa, Idaho, with his family July 1, 2022.

Still wanting to work and serve the community he was in, he became a part-time marshall for the courthouse in Nampa in January of 2022. However, in April Charlie was getting sick and was told that a new cancer had appeared and the Lymphoma had also returned. Charlie fought the disease valiantly, and fiercely, spending three months in the hospital undergoing chemo, radiation, and other treatments. Stanford doctors told him at the end of July 2022 that there was no hope and Charlie decided to return to his family and home in Idaho.

Charlie was a hero to his family and friends, always there for them when needed. Charlie was very proud of his children, often saying that they were good kids, and the most important job he had was to love them and to give them an example to be a kind, reliable, and honest adult. While in the hospital, he stated again how pleased he was that each of the adult children "were launched in life, that they would continue to be good people." He only hoped that he had given enough direction in three years to his younger daughter and son, so they will be able to hold on to the lessons and morals he always showed by words and actions.

Also all the families that claim him as one of their own; Kevin and Stacy Kastler and family 0f Idaho, Pam and Todd Wilcox and family of Idaho, Lee Bryan and family of Nevada, Randy Bott and family in Corning, California, Kay and Bill Woods and all their children and grandchildren. Norman and Kelly Arbec and children and extended family, and of course, all his cousins.

There will be a memorial for Charlie on October 15, 2022, starting at 1 pm. at the River Lodge in Fortuna, California. All of Charlie's and family and friends are welcome to come and celebrate Charlie's life. Because Charlie did not drink or smoke, we would hope his example would be followed in the memorial.
Prev
Next