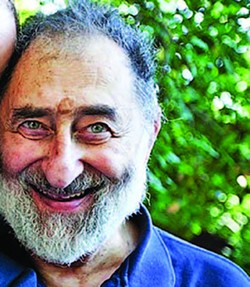 We are sad to announce the passing of Lawrence “Larry” Joseph Hourany, PhD, of McKinleyville, California. Larry passed at the age of 86 years old on October 5, 2022, surrounded by his daughters, brothers and sisters. He passed away in the place he loved the most, Humboldt County.

Larry was born in New York and moved to California when his parents moved Larry and his siblings to California in the 1950s where they first settled down in El Cerrito. The family then moved to Walnut Creek where Larry worked in the family grocery store called the Willow Tree. After graduating from El Cerrito High with high accolades in basketball (one of his many loves in life), he attended Diablo Valley College to pursue a degree in higher education. However, Larry was drafted into the US Army where he served as a neuropsychiatric specialist for two years. After leaving the Army he continued pursuing a degree in higher education, receiving a Bachelor's from San Francisco State University, his Master's from San Jose State University and his PhD in Psychology from the University of Western Ontario, Canada. After graduating, he became a professor, focusing his teaching in the areas of Child and Geriatric Psychology. Larry worked as a professor at various universities including Cedar Crest College in Pennsylvania and San Jose State University in California before retiring. He was a philosopher and scientist, always searching for equality in humankind. Larry was a well-respected teacher with many published works. Most of all, his gift for giving back was unparalleled, especially for those in need. It was his greatest motivator in life.

Larry chose McKinleyville to call home and was passionate about serving on the Grand Jury for many years. This is where he met and helped form a group with other intellectuals from the Grand Jury, meeting for years once per week for group discussions on many world topics. Life-long friendships were formed. Larry was an avid chess player all his life, sometimes playing online throughout the night. His life story is long, however, for his family who loved him most, it wasn’t long enough. He is survived by his two daughters, Raelene and Kari, his sisters Francene and Diane, brothers Dennis and Lance, and his grandchildren Taylor and Chase. In lieu of a service any donations may be made to his favorite organizations: AHHA at www.ahha-humco.org/volunteer or Veterans for Peace at www.veteransforpeace.org/donate/donate-veterans-peace.
Prev
Next