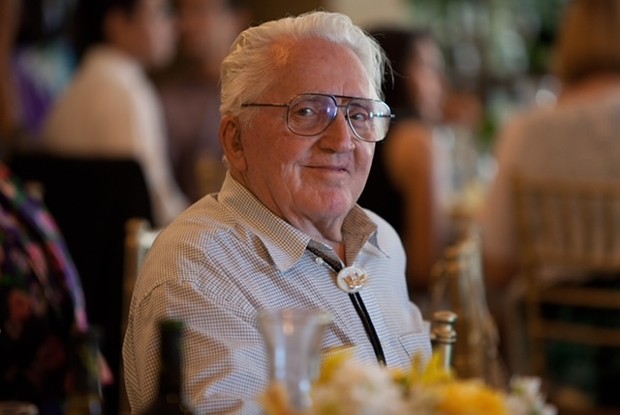 Gerald (Jerry) Keith Miller passed away in his home surrounded by his family on Thursday, Oct. 20, at age 95. He is survived by his wife of 73 years, Glenda, four children, nine grandchildren and 14 great-grandchildren.

Jerry was loved and respected by everyone who knew him. Jerry had an engaging way of speaking with others. People often commented about how eloquently he shared stories. He was a kind and supportive husband, father and grandfather, and will be greatly missed.

Jerry was born Jan. 15, 1927, in Holmes, California, to William Patterson Miller and Lydia Ruth (Freeman) Miller. Jerry was one of seven children that grew up in Holmes spending his early days working on the family dairy and enjoying carefree summers swimming in Jones’ Hole, playing baseball games, and getting into mischief from time to time. He was a child of the depression, which had a profound impact on the way he looked at life, on his work ethic and how he helped those in need. His family grew or raised everything that went on the kitchen table with the exception of flour and sugar. Shoes were a luxury and when his wore out, he often went barefoot to school.


Jerry graduated from Fortuna High in 1945. During his high school years, he won the county track meet, throwing the shot put. He also competed on the FFA boxing team where he was crowned champion his junior year by knocking out his opponent in eight seconds. He went on to compete in Golden Glove Boxing and was a heavy lightweight champion. In recent years, he was one of several local Golden Glove boxers featured in the Ferndale Museum documentary, Lords of the Ring.

After high school, Jerry joined the United States Navy around the time World War II was ending. He was stationed at Camp Shoemaker. As a result of his typing skills, he worked on the discharge process for our boys overseas. Dad was humble about his time in the service. When recognized as a WWII veteran, he always gave credit to those who saw combat. When he returned from the military, he met Glenda Titus at a Grange Dance. He was a true gentleman with impressive dance skills. They were married June 12, 1949. Jerry and Glenda lived in several different towns from Ferndale to Holmes until they bought their family home on Centerville Road in Ferndale in 1961. Jerry took great pride in his home, always keeping the lawn green and in later years growing a vegetable garden.

After working on his father’s dairy, and the Genzoli dairy, Jerry went to work in the woods. He spent more than 40 years falling trees and working for several logging companies. He fell many big trees in his day. The most impressive was 21 feet across; it took him three days to fall. After work each day, he came home smelling like wood chips and would sit at the table writing log scale on his hard hat. He was fondly known to many of the guys in the woods as Gentleman Jerry and Metric Miller. A few years ago, he was the narrator for the Ferndale Museum’s documentary, Working in the Woods.

Jerry was a member of The Native Sons of the Golden West Ferndale Parlor #93 and went on to Grand Parlor as a Grand Trustee. Many officers wanted him to run as Grand President, but that would have taken him away from his family, so he turned it down. He took pride in knowing each part of the ritual work from memory and spearheaded many historical dedications in Humboldt County. Jerry and his wife, Glenda, made wonderful friends through his association with the Native Sons. He started the annual Joseph G. Oeschger weekend in the Redwoods, which still happens each February.

Jerry volunteered for Ferndale Volunteer Fire Department Company 1 for many years. During the 1964 flood, he and his brother-in-law Dayton Titus braved the Eel River going out in a boat to rescue an elderly couple in the Waddington area from floodwaters.

Jerry often spent mornings playing pinochle at Beckers’ (Papa Joe’s) with many different friends over the years. During his retirement, he enjoyed walking several miles a day through Ferndale as well as volunteering for the Ferndale Museum. He was an avid San Francisco Giants and 49ers fan. He loved watching sports, talking sports and analyzing sports. He loved our country, its history and often pointed out how much had been sacrificed for the freedom we enjoy. He spent much of his time going to his childrens’ and later grandchildrens’ various activities. He was their greatest fan. In recent years, he especially enjoyed his great grandchildren visiting him in his home.

He was proceeded in death by his parents, William Paterson (Pat) and Lydia Miller, and each of his siblings Reginald Miller, Marjorie Green, Viola Powers, Bill Miller, Barbara Zumwalt and George Miller.

There will be a memorial in honor Jerry’s long and impactful life Nov. 5 at 1 p.m. at the Ferndale Community Church, followed by a reception at the Ferndale Veteran’s Hall.