Alvina “Lee” Perkins died peacefully on Oct. 20, 2022, at the age of 90 in her home in Los Angeles with her daughter holding her hand. Lee was born in Chicago, Illinois on July 2, 1932, to Carl and Erna Guettler. Carl moved the family to Ferndale, California, around 1937 to be close to Erna's adopted mother from her years in Germany. After Erna died in 1939 following a short battle with leukemia, Lee was sent back to Chicago to live with her Grandma Guettler while her dad tried to recover from his beloved wife's death. Lee would later return to Humboldt County to go to various schools. She finished high school at Concordia High School in Oakland, California, with her younger sister Carla.

Upon the request of her mom, Carl made sure that Lee and Carla finished their college education at Concordia University in Chicago before they got married. Lee graduated from Concordia in 1954 with a degree in Music Education where she mastered playing the pipe organ under the tutelage of some of the best in the business. She began her teaching career in Joliet, Illinois. She met her husband Thomas Perkins while in Chicago and they married on June 25, 1955, in a double wedding with her sister Carla and her husband Leonard Schoepp. Both couples moved back to Eureka to help Lee’s dad Carl run the Fireside Motel which Carl built. Lee taught primary and special education classes at several Eureka City Schools including Lafayette, Worthington and Jefferson Elementary schools as well as Rio Dell Elementary and South Bay Elementary during the late 1950s into the 1970s. 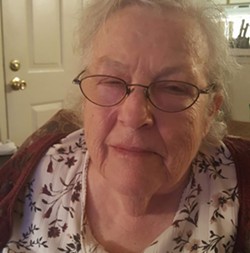 Lee also taught piano to many students in Humboldt County and put on many recitals. She became a dear friend to many of her students keeping in touch after they moved on in life. She also gave the gift of music to her son and daughter at an early age placing them in music lessons for as many instruments as they wanted to learn. This gift of music carried on and has enriched their lives throughout the years.

Lee moved down to live with her daughter Andrea in Los Angeles in her last 10 years to receive top medical care. Her daughter took the best care of Lee making sure her life was happy, peaceful and as comfortable as possible.

A Celebration of Life Service will be held for Lee at Lutheran Church of Arcata on Dec. 10, 2022, at 2 p.m. with a reception to follow. The church is located at 151 E. 16th St., Arcata, California. All who knew and loved Lee are more than welcome to come and celebrate the life of such a sweet, gentle, loving soul that Lee was while living here on earth.
Prev
Next