Despite tree-sits and nudes, the Willits bypass work churns on 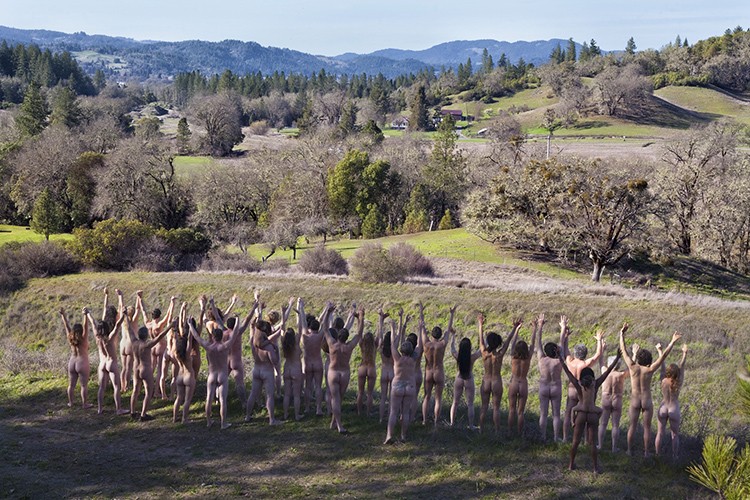 It was closing on 5 p.m. last Friday, March 22. End of the day at the end of a traditional work week. But Amanda Senseman was talking to a reporter on one of her three cell phones while another rang incessantly and the third charged, sucking power from a small solar panel.

She is the "Warbler." Except at night, when she sleeps, she hasn't had a moment to herself, most days, since Jan. 28, when she climbed into this Ponderosa pine tree alongside Highway 101 just outside Willits. The 24-year-old tree-sitter has vowed she won't leave work until either the law climbs up and brings her down or the California Department of Transportation agrees not to build a freeway through the Little Lake Valley to divert traffic around the city of Willits. Her tree, and the surrounding verdant hills and pasture dotted with madrone, oak, pine and cattle, are in the path. Her tree-sit, two others that just sprang up nearby, and accompanying protests on the ground have contributed to off and on delays for Caltrans. In February, the agency began clearing brush and trees to build a fence between the projected freeway and lands that are to remain untouched.

The previous day, Thursday, about 50 protesters, some from Humboldt County, convened at the construction site to block bulldozers and brush-clearing equipment. Dozens of California Highway Patrol officers also showed up.

"All of a sudden they started accumulating," Senseman said, over the phone. "There were more than 20 officers here."

She watched them shoo protestors to the other side of the highway, put up traffic cones to keep others from stopping, arrest eight on the ground who refused to quit blocking workers' progress, and evict the base camp supplying her tree-sit. The CHP set up a watch near Senseman's tree. The officers stayed all night. Then all this day, Friday. Now, she said over the phone, a few had left; the rest seemed to be settling in for another night.

Protests over the Willits bypass also spilled into the city's streets last Thursday, when construction workers staged a protest against the anti-bypass protesters. Meanwhile, a group called Save Little Lake Valley has been documenting it all; a petition is being circulated to stop the project; photographer Jack Gescheidt, of The TreeSpirit Project, who poses nudes in nature to take art (and sometimes political art) shots, arranged a nude photo shoot last weekend to, as Gescheidt said later, "demonstrate our love for Willits Valley"; and Caltrans started a blog to promote the project.

Caltrans says the $210 million bypass will reduce congestion through town by diverting much of the pass-through traffic. Opponents say most of the congestion in town is local, hasn't increased in years -- and won't, at any rate, be fixed by this bypass. They say Caltrans failed to study less environmentally destructive bypass locations, especially two-lane ones -- how about that railroad right-of-way through town? Caltrans says it examined at least 30 alternatives, including three using the railroad bed which could entail anything from tearing down houses to possibly moving the tracks. Opponents say the bypass will devastate businesses downtown and burden the city with maintaining the main street -- Highway 101, which will be relinquished to the city by the state. Caltrans says the city will then be able to do what it wants downtown -- close off the street for a fair, put in traffic calming circles. And so on.

The bypass idea is not new. Caltrans has been proposing traffic diversions to ease congestion there since the mid-1950s, says the agency's website. Over the years, different bypass scenarios have arisen and fizzled, sometimes for lack of local support, other times lack of money. One piece of freeway did get built, in 1969, south of Willits. The current bypass effort started up in 1987. Ever since, it's been one long round of documentation and approvals from various permitting agencies, public scoping sessions, alternatives presented and discarded, and occasional diversions of agency attention and funding to more urgent projects. Finally, the agency settled on building a 5.9-mile bypass through the valley east of town, with interchanges on each end. Environmental documents were completed, aired in public and approved. Land was purchased from ranchers and other property owners for the bypass, and for mitigation within the valley. Contracts for the work were signed.

The project is envisioned as a four-lane expressway. But it will happen in two phases: First, the contractors will build two lanes on a four-lane expressway roadbed. Second, when there's money for it, two more lanes will be added. Last May, several environmental groups and the California Farm Bureau sued Caltrans to stop the project. The suit alleges, among other things, that the agency failed to properly explore other realistic two-lane bypass options; that later construction to make it four-lane would further disrupt the environment; and that the two-lane design shift arose after completion of the environmental impact statement -- so a supplemental document was in order. The suit also complained that no funding had been committed for mitigation, nor had a detailed mitigation plan been vetted. In November, a judge denied the groups' request for a preliminary injunction to stop the construction, saying they hadn't proved they were likely to win the suit, nor that an injunction suited the public interest, according to a report from the Willits News.

Mendocino County Farm Bureau Executive Director Devon Jones said last week that the bureau is not against the bypass project.

"We're just trying to find a way to minimize impacts to agriculture," she said. "And we want to make sure this does not establish a precedent for other Caltrans projects in the state."

As mitigation for the loss of 60 acres of wetland to the project, Caltrans bought 2,000 acres of valley land. Much of it was under assorted leases to ranchers and amounted to about 25 percent of the total farmland in the Little Lake Valley, said Jones.

Caltrans spokesperson Phil Frisbie said by phone last week that 400 of the 2,000 acres will be retired from production and restored to a natural state. Invasive species removal, and fencing to protect the creeks from cows and their trampling hooves, will begin this summer. The remaining 1,600 acres likely will undergo a more restricted regime of grazing, and under one lessee instead of several, Frisbie said. All 2,000 acres will be managed by the Mendocino Resource Conservation District, and monitored regularly by the California Department of Fish and Wildlife, he said.

Jones said ranchers who lost their leases will have trouble finding new grazing land to move their cattle to. And, she said, the bureau is worried about the huge ratio of mitigated lands to lost wetlands. Would other projects in the state require similar, henceforth?

Frisbie agreed the ratio is large.

"The preferred way to mitigate for wetlands is for every acre you impact you create or restore two acres," he said.

That's the rule agreed on by the Environmental Protection Agency and Army Corps of Engineers. In 2006, Frisbie said, the EPA issued new guidelines that said if there are no wetland areas to restore, project managers could do what's called "watershed enhancement" using other acres. This alternative requires a much larger ratio, Frisbie said. And that's the route Caltrans chose in Little Lake Valley, where there aren't enough would-be wetlands to make up for those lost.

The next court hearing in the bypass lawsuit against Caltrans is June 7.

Of late, environmentalists have accused Caltrans of defying federal law that protects migrating birds by doing construction during nesting season, which recently began. In fact, the project did stop for several weeks while the agency reworked its bird nest survey protocols with state Fish and Wildlife, Frisbie said. But as long as Caltrans follows the protocols, it can continue the work.

"We are following all state and federal laws," he said.

Protestors sent out angry email alerts late last week, after the CHP descended in force to the tree-sit areas and routes leading to them.

"We had been stopped by people trespassing several times over the last couple weeks, putting themselves in harm's way in front of equipment," said Frisbie. "This is really a safety issue."

Last Friday, up in her tree, Senseman was watching the cops below her and pondering what the night would bring. Fifteen minutes earlier, she said, a woman from Caltrans had arrived, raised a bullhorn to her lips, identified herself -- Senseman couldn't remember her name -- and shouted: "To the woman in the tree. ...  You are trespassing. If you do not leave immediately, Caltrans will deploy CHP officers to remove you."

The Caltrans employee had left. Over the phone, Senseman said her adrenalin was certainly up. She was worried the CHP might come for her in the middle of the night. Not that the one-time goat and vegetable farmer was scared.

"I'm righteously outraged," she said, the fervor that drove her into the tree coming out in her voice. "I'm furious they continue to do work."

Last we heard, on Monday afternoon, she was still in her tree.