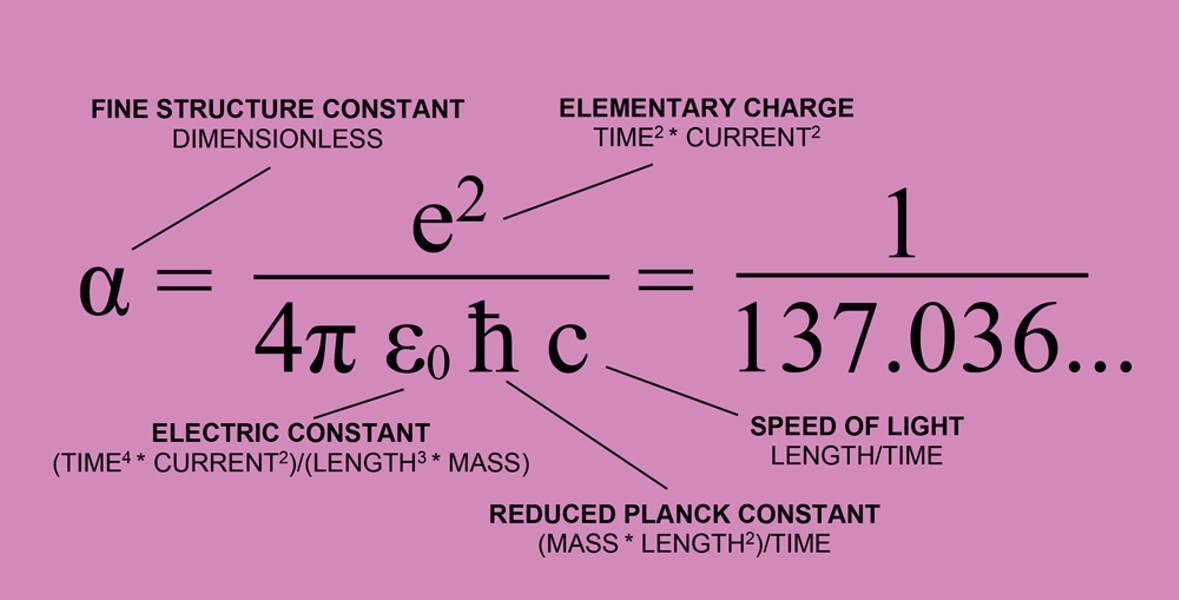 Image by Barry Evans One way to calculate the fine structure constant α is shown here. Note the units of the other fundamental constants all cancel out, leaving α as a dimensionless number.

"[The fine structure constant] is one of the greatest damn mysteries of physics: a magic number that comes to us with no understanding by humans ... you might say the "hand of God" wrote that number ... ."

When otherwise hard-headed physicists invoke God or the Devil, you can be fairly sure they're just doing it for effect, not as a reflection of their godly beliefs. Einstein, a deist, famously said that God didn't play dice with the universe (preferring causality over the randomness of quantum mechanics); Nobel Prize winner Leon Lederman, late director of Fermilab and an atheist, titled his book on the Higgs boson The God Particle (claiming his publisher nixed The Goddamn Particle); Wolfgang Pauli, the Austrian pioneer of quantum physics, also a deist, said that his first question to the Devil after he died would be, "What is the meaning of the fine structure constant?"

Good question, since the fine structure constant, aka "α," or "alpha," has given rise to a lot of speculation by both scientists and mystics — in one case, in the personage of the same person, as we'll see. In contrast to other constants of nature, such as the speed of light, the intensity of gravity and the Planck constant (which connects the energy and frequency of a photon), the fine structure constant alpha is dimensionless: It has no units, it's just a number. Contrast this with the other constants I just mentioned. The speed of light, for instance, is defined as exactly 299,792,458 meters per second. But that depends on knowing what units we're using. Suppose we wanted to demonstrate to ETs in another solar system that we're smart enough to have figured out the speed of light. How do we convey that knowledge if they don't know what meters and seconds are?

The beauty and inherent mystery of alpha is that we can show those ETs that we've figured out advanced physics by simply sending them a number (in binary code — we only use the decimal system because we have ten fingers). If they have the technology to receive our message, we can be pretty sure they'll understand what it means, since they'll have figured out alpha too. It's a cool number, about 0.007297..., which is close to the reciprocal of 137, i.e. 1/137.

For a while, physicists, in particular Arthur Eddington, thought alpha was exactly 1/137. Eddington was the Carl Sagan of the 1930s, writing several hugely popular books on science for laypeople. Unlike Sagan, in addition to being a first-rate scientist (he was the first to correctly model how stars shine), Eddington was also a mystic. After figuring out the approximate number of protons in the universe, he claimed that, from that number, alpha could be "obtained by pure deduction," that is, metaphysically. In 1929, he said that it was exactly 1/137 (switching from his previous derivation of 1/136, earning him the teasing sobriquet "Arthur Adding-one").

It would be cool if alpha was exactly 1/137, though, because of its Kabbalistic connection. In the Kabbalah, the Jewish mystical interpretation of the Bible, a word can be assigned a numerical value, its gematria. And the gematria of the word Kabbalah is (cue spooky music) 137.

Alpha is about as crucial a constant as you can get, connecting several of nature's most fundamental values (see the illustration). It crops up everywhere, both in particle physics and life itself. Change the value of alpha just a tad, and stars wouldn't be able to synthesize carbon. No carbon, no life. No life, no us. Whether God, the Devil, some kid playing simulation games or Lady Luck herself gave us alpha, we could do worse than give thanks for Feynman's "magic number."

Barry Evans (he/him, barryevans9@yahoo.com) pretends he actually understands what he writes about here.