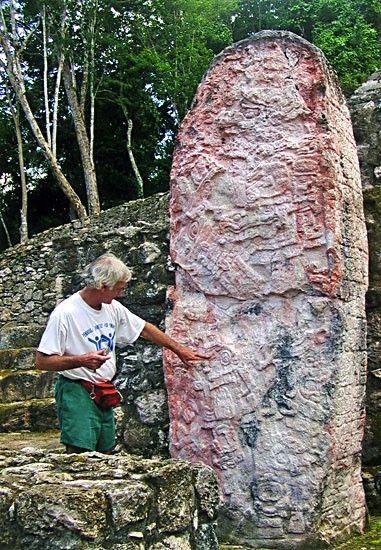 Dec. 21, 2012, marks a happy coincidence of the winter solstice with a notable turning of the Mayan calendar. The "long count" calendar, used from approximately 200 to 900 A.D., can be found represented on literally hundreds of Mayan stelae in Mexico and Central America. It's a remarkable system for designating the exact date by counting the number of days from the start of their calendar -- Aug. 11, 3114 B.C. by our calendar is their Day Zero.

The Mayan word for a day is k'in.

Why, you may wonder, didn't they adopt a straight base-20 system, where each place to the left denotes a 20-fold multiplier (analogous to our base-10 system)? Perhaps, one theory goes, the 360-day tun represents 18 months of 20 days followed by an intercalary five-day "month" to approximate an astronomical year.

You may have heard about 2012 not as a celebratory date, but as a prediction for the end of the world (again). The 2012 movie is coming out at the end of this year, hard on the heels of the first crop of 2012 disaster books. Let's face it, we're more likely to buy books and movie tickets for an upcoming catastrophe than for a happy event. Seriously, if we can survive the Cold War and Dick Cheney, 2012 should be a breeze.

Me, I'm more worried about the U.S. Census Bureau's prediction that the world population will hit seven billion in 2012 ... perhaps (ominous music) on Dec. 21?

Barry Evans (barryevans9@yahoo.com) is stocking up on Power Bars and tequila, just in case. He lives in Old Town Eureka.