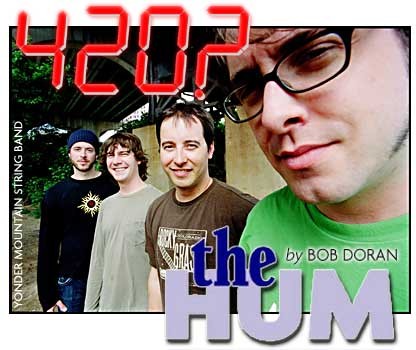 If you're in the know you can imagine why four-twenty is such a big deal here in Humboldt - and it has nothing to do with blackbirds baked in a pie. For the uninitiated, 420 (or 4:20, or 4/20) is code for getting baked, as in the consumption of marijuana. Exactly why is lost somewhere in a smoky mist of lost memory cells.

The urban legend website Snopes.com debunks the theory that 420 comes from the California penal code section relating to marijuana use and pooh poohs the notion that there are 420 active chemical compounds in pot (for what it's worth, High Times says there are 315). The folks at Snopes guess that the term came from a group of Marin County teen stoners who gathered every afternoon at 20 after 4 to share a smoke. (Was it pure chance that the legislative deal implementing California's medical marijuana initiative Prop. 215 was Senate Bill 420?)

Whatever the source, the time and associated date have become synonymous with herb culture, which means it is an auspicious day to put on a concert that stony types might want to attend. The Passion Presents crew settled on the Colorado jam/bluegrass band Yonder Mountain String Band as appropriate for Friday's holiday and chose a fine venue for their 4/20 concert. Here's where it gets tricky. The show is at the brand-spanking-new Arkley Center for the Performing Arts, which does not strike me as the sort of place you'd expect to see a crowd of stoners grooving to string jams. It goes without saying that smoking is not allowed inside the A-Center -- how that rule will be enforced remains to be seen.

I first heard YMSB around the turn of the century when they were on tour as an opener for fellow Coloradicals Leftover Salmon. I'd have to say I was not exactly impressed. They were a raggedy bunch of pickers who were described as a bluegrass band. My guess was they'd learned about bluegrass from the Grateful Dead, which turned out to be true. Of course that was a long time ago and they've honed their chops living on that mountain (they're from Nederland, over a couple of ridges from Boulder). They are now at the top of their game and have managed to become one of the hottest jambands still standing. Like the Dead, they meld songs into each other creating endless jams, and fans trade tapes of the live shows. Last year the band made the leap to a major, recording an eponymous album for Vanguard with former Humboldt local Tom Rothrock at the helm. But in the jamband world the show's the thing, and YMSB has its act down tight.

Concerts end relatively early at the A-Center, which leaves several hundred concertgoers potentially wanting somewhere else to go. Passion-P has its official YMSB after party at the Red Fox with the Steve Watts Band (led by a Passion partner). Your YMSB ticket stub gets you your first beer or well drink. Meanwhile, next door to the A-C at Indigo, it's the (unofficial) "420 Downtown After Party," with dollar microbrews and DJ Ray spinning dancehall reggae.

Around the time the Eureka show ends, over in Arcata Subliminal Sabotage should be into their second set or so at Humboldt Brews, throwing down hip hop and celebrating 420 Humboldt style.

Down the way at Muddy's Hot Cup, Portland's self-proclaimed "seismic gypsy hypno-jazz" band Taarka will be on the second night of a two-day run. Fleet-fingered mandolinist/multi-instrumentalist David Tiller and his fiddling wife Enion Pelta-Tiller are whirling dervishes who draw on Middle Eastern and Balkan folk forms and intricate rhythms as they lead a quartet with a standup bassist and a djembe player. BTW, you can catch a taste of Taarka on your radio Friday when they play in the KHUM studio on Larry's show at around 4 p.m. Hmmm, that would mean they'll be live on the air at 4:20 on 4/20.

Another 4/20 option: Blue Lake Casino's Steelhead Lounge has the Neil Diamond tribute Diamond Eyes on Friday and Saturday. Haven't caught the act yet, but it makes me think of that movie Saving Silverman -- you know, the one where Jack Black and Steve Zahn try to save their Neil Diamond tribute bandmate (Jason Biggs) from the fiancé from hell (Amanda Peet). Fair warning: do not take your 420 break in the parking lot; there are surveillance cameras, as one local band discovered. (They were not invited back.)

Jumping back a day to Thursday, April 19, the discriminating music fan has a number of choices. Six Rivers Brewery brings in Toca, a band from L.A. that's hard to pigeonhole. Danny "Xololanxinxo" Rodriguez from the Of Mexican Descent crew got the Toca ball rolling a few years back -- they showed up on the Project Blowed 10 Year Anniversary Album, and worked with underground hip hoppers Abstract Rude and Aceyalone (who are coming the Arcata with Haiku d'Etat April 28) as well as 2Mex and Busdriver. But Toca is not exactly a hip hop outfit. Brothers Ceschi and David Ramos help spin the band off toward synth-pop, blending elements of Latin jazz, reggae, and good ol' rock in the mix.

Thursday at Humboldt Brews it's On the One, a jazz/funk outfit out of San Diego. Remember San Diego's Greyboy All-Stars, the funk/jazz congregation that spawned a number of spin-offs once called "side-car projects": Karl Denson's Tiny Universe and Robert Walters' 20th Congress among them? Think of On the One as a spin-off from a sidecar with Tiny Universe drummer John Staten on the kit and his former Giant People bandmate John Staten blowing wild sax.

For jazz of a different sort there's pianist Darius Brotmanin concert at Fulkerson Recital Hall accompanied by bassist Richard Saunders, who some will remember from decades back when he was jazzing at the Jambalaya.

Long, long ago when I was a Humboldt State student the annual spring fling was called Lumberjack Days. It was an often rough and rowdy affair that included music, drinking to excess and axe-throwing (preferably not all at the same time). Somewhere along the way the event was transformed into something more eco-groovy and became the Sustainable Living Arts & Music Festival, also known by the rougher/rowdier acronym SLAM Fest. This year's fest, the 12th annual, takes place Saturday, April 21, in the parking lot behind HSU's Gist Hall. They'll have displays and demos of all things sustainable: solar panels, hybrid cars, eco-fashion and the like and (as with Lumberjack Days) lots of music. The tunes kick off at noon with the Humboldt Calypso Band, who play on converted oil drums, which is about as sustainable as you can get. Next up are the winners of the recent KRFH Battle of the Bands (playing SLAM Fest was the prize) teen jamrockers Steel Toed Slippers (1:40) and the bella a cappella ladies, Aka Bella (2:30). After a break with skits by campus clubs and a speech by Arcata's eco-groovy ex-Sen. Wes Chesbro (at 3:30), music resumes with rock/ska/funksters Thicker Than Thieves, former Humboldt/Mendo guys who now live down in San Diego (at 4:20, appropriately), followed by local samba troupe Bloco de Firmeza (5:45) and last but not least (starting at 6:20) British reggae/ska "N-I-C-E" guy, Pato Banton, backed by Cali-reggae band Mystic Roots.

More reggae? You got it Saturday night at Humboldt Brews: the Western Medicine Tour (think 215) with Brooklyn-born Rasta Rocker T, Soul Medic, Fiya, Ishi Dube, JahSun, JahWomb, JahBlaze, DJ Irie Dole and Lionheart Sounds, plus "special guests" (with that many Jah-folks already on the bill, I'm not sure how they'd add more). And there's still more reggae Wednesday, April 25: Groundation, fresh from a European tour, kicks off a Northwest jaunt with a show at Red Fox Tavern.

Other choices for Saturday: an eclectic night of alt. this and that at the Alibi with The Space Cretins, a glam punk outfit from Seattle and Mosquito Bandito, a retro-lo-fi one-man-band from Detroit who's on the road with Touchers, a punky garage band out of Bozeman, Montana.

Around the corner at Jambalaya Moo-Got-2 gets all funky and shit. Earlier in the evening you can hear Peggy and John (aka the stone-age "folk/country/rock/psychedelic" duo Fred and Wilma) playing at Mosgo's, following an even earlier (6 p.m.) set by the Redwood Children's Chorus, who are raising funds for a trip to Spain.

Sacred Grounds brings together some semi-folky types Saturday: The Tao Jonesers, Andrea Zvaleko and guitar wiz Todd Krider. Heading south we have San Pablo Project back from the Bay to lay down funky AfroCuban grooves at the Pearl. Adam Dias is making a live recording with The Locals at the Gilded Rose in Loleta with special guests UKEsperience. And at Out of the Sun it's a super-heavy grind/death-metal blast with Portland's Bedlam Massacre, Embryonic Devourment from Willits and Humboldt's own Locust Furnace.

In my mailbox when I came home from my travels, a note from Andy of Strix Vega who is about to hit the road with that "culturally insensitive" band Que La Chinga. Says Andy,"I'm not sure if you got word while you were away, but Que La Chinga apparently played their last local show this past Friday at The Pearl (which turned out to be a surprise to all their fans). There are already rumors going around that they will have more shows, but so far that's been denied by the Chingas. We'll be heading up to play in Eugene on Thursday, followed by shows in Seattle and Portland. So as if we weren't honored enough to be touring with them again this weekend, we may be the only Humboldt delegates to truly see their last show together. Needless to say, we Vegas are all very sad to be losing our favorite band. What the fuck? What a world ..."