A (Board) Walk Through Time 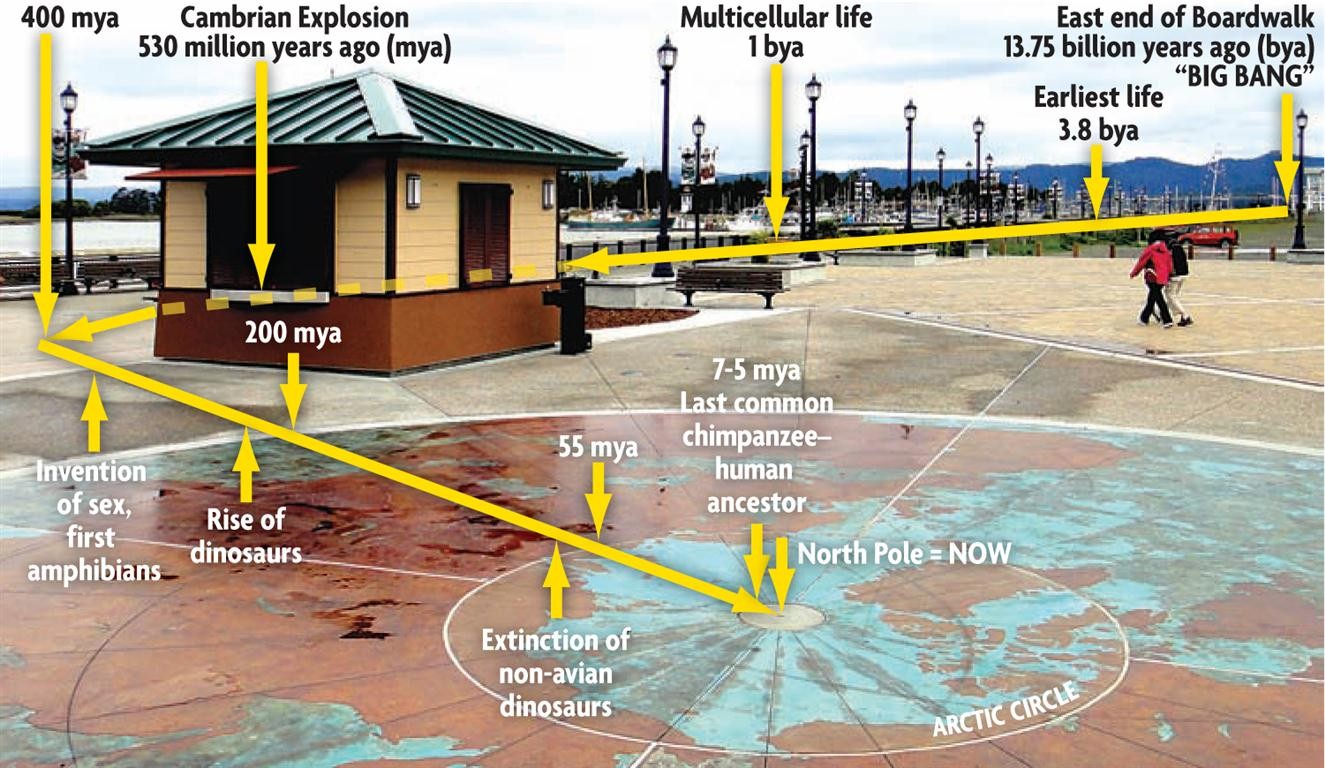 Come take a stroll through time with me, all 13.75 billion years of it, give or take a week or so. Our walk will take 10 minutes, max, along Eureka's quarter-mile-long boardwalk, from the east end opposite G Street to the center of the new map next to the C Street dock. A quarter mile is 1,320 feet, so let's make this easy and say the boardwalk is 1,375 feet long, so that one foot represents exactly 10 million years. (Coincidence? I think not!)
We start off with our backs to the railing at the east end, the Big Bang. This is the moment of creation, when all the stuff of the universe, matter and energy, and time even, came into being out of nothingness (I know, I know; please don't ask). Three minutes later, protons and neutrons had combined to form the nuclei of the simple elements of the early universe: hydrogen, helium and lithium. Thirteen paces/300 million years west, pockets of primordial gas merged at sufficiently high densities to ignite nuclear fusion and the first stars were born. Galaxies resulted from the mutual gravitational attraction between them.
Moving on past the F Street dock -- where the Milky Way was forming -- let's pause opposite the west wall of the old Co-op building, the one with the pastoral mural next to First Street. This is now 4.6 billion years before the present, when an immense molecular cloud of hydrogen coalesced into our sun and planets. (For comparison, 4.6 billion would be the number of your accumulated heartbeats if you live to 140.)
A short 40 paces on, the third rock out, ours, had sufficient respite from meteor bombardment for oceans to stabilize. The stage was set for life on Earth, which began about 3.8 billion years ago. Ahead of you to the left is a green-roofed utility shack. Stop at the corner of the building. In a moment, you'll be walking down the 60-degree-east line of longitude, passing over what's left of the Aral Sea, but for now -- 400 million years ago -- appreciate the swirl of exuberant life all around. The Cambrian Explosion (bringing most major phyla into existence) happened a few steps back, and now life, busting out all over, is emerging from the oceans, inventing sex and experimenting with the tetrapod (four limbed) form from which we are descended.
Move on another 20 feet to the edge of the circular map, 200 million years ago. Dinosaurs ruled the planet approximately from here to the Arctic Circle (the thick white circle six feet from the center), after which we mammals came into our own. And here it is, the North Pole. At this scale, the last 5,000 years -- all of human history -- is represented by the thickness of three pages of the Journal. This is the realm of everyone we've ever heard of (cue Vangelis), "all those kings and battles, migrations and inventions, wars and loves." Carl Sagan knew his way around both words and the universe.

Barry Evans (barryevans9@yahoo.com) was spellbound by Sagan's Cosmos 30 years ago (not billions and billions).