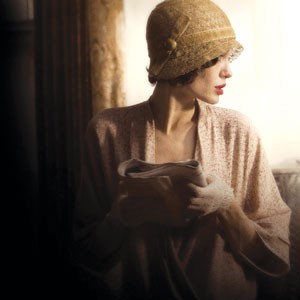 Role Models is a slacker film featuring Paul Rudd and Seann William Scott as two pals sentenced to 150 hours of community service in a city youth program. Rated R for crude and sexual content, strong language and nudity. 99m. At the Broadway, Fortuna and Mill Creek.

Soul Men features the late Bernie Mac and Samuel L. Jackson as estranged backup singers for a famous blues singer (John Legend) who are invited to a tribute concert when the singer dies. A young female singer (Sharon Leal) travels with them. Rated R for pervasive language, and sexual content including nudity. 103m. At the Broadway.

Trouble the Water is a documentary about New Orleans following Katrina. Kimberly Roberts didn't flee; she shot video of the storm and filmmakers Carl Deal and Tia Lessin make her and her images their subject. Not rated. 93m. At the Minor.

CHANGELING: Perhaps he's never been a top-notch actor, but Clint Eastwood has become one of our best directors. Beginning with Mystic River in 2003 and continuing through Million Dollar Baby, Flags of Our Fathers and Letters from Iwo Jima, Eastwood has tackled varied subjects with careful, thoughtful and effective directing.

He brings these same qualities to his latest release, Changeling, which is based on the disappearance in Los Angeles of the 9-year-old Walter Collins on March 10, 1928, while his single parent mother was unexpectedly at work on a Saturday. After briefly establishing the milieu of 1928 Los Angeles and the world of Walter and his mother Christine (a fine Angelina Jolie), Eastwood cuts to the kidnapping and subsequent fallout.

But it is clear that Eastwood's primary interest is not in the missing child as such, nor in the grisly murders that are discovered later in the year, but in the low status of women and the incredible political and police corruption that apparently existed in the city (not a surprise if you've seen films such as Chinatown).

From the moment Christine returns from work (she's a supervisor at a phone company), her life descends into an increasing helplessness that would have defeated a less courageous and determined woman. As it turns out, the police are under pressure to bring in a positive result because of attacks on their corruption by the local Reverend Gustav Briegleb (John Malkovich in a nicely restrained performance), so when a boy is discovered seemingly abandoned in the Midwest several months later, Christine is told her son has been found.

When she is reunited with the lad, though, she immediately claims the boy is not her son, but is forced by police captain James Davis (a convincing Colm Feore) to take him home anyway. Despite the fact the boy is three inches shorter and is circumcised, a psychiatrist hired by the police diagnoses her as delusional. She is labeled an unfit mother and finally incarcerated at the psychiatric ward of L.A. County Hospital solely on the orders of Davis. (We discover she's not the only one).

How Christine deals with all of this is the core of the narrative, and while a woman in dire circumstances is familiar fare -- Gaslight and Notorious come to mind -- Eastwood carefully dissects the cultural and societal forces that led to women being held in such low esteem (Christine has to wear roller skates at work to get around faster.) Recommended. Rated R for some violent and disturbing content, and language. 141m. At the Broadway.

At that point, the film devolves into a sappy romantic comedy and any remaining satire disappears. This is just another tired guy film and I'm just not enough of a guy to appreciate it. I expected more from Smith.

There is a final twist: Instead of a post-end credits sequence there is a longish mid-end credits sequence. Too bad most of the "guys" missed it. And don't expect to see too much of Banks. Rated R for strong crude sexual content including dialogue, graphic nudity and pervasive language. 101m. At the Broadway, Mill Creek, Minor and Fortuna.

THE HAUNTING OF MOLLY HARTLEY: As I sat in the theatre suffering through this lame teen horror film, I idly wondered what goes through the minds of film executives when they green light a script. Not that I really care, but I had to keep my mind occupied somehow. I do know that viewers who watch a lot of TV will recognize many of the actors in the film.

Molly's dad Robert is played by Jake Weber, the husband in Medium (pretty much the same character). Her would-be boy friend Joseph at her new private high school is Gossip Girl's Chace Crawford, while the Bible-thumper student who wants to save Molly's soul is Shanna Collins, the brainy and attractive high school student in Swingtown (now cancelled) who falls for her teacher. Rebel student Leah is Shannon Woodward from The Riches, and rich bitch student Suzie is the slut daughter of a lesbian on Nip/Tuck.

You would be correct to suspect that I'm avoiding the movie, which is a bland variation of the Faust story except Molly doesn't get to sell her own soul. It seems her mother, now incarcerated at a loony bin for stabbing Molly with scissors, did that for her. I don't watch Gossip Girl, but in every other case the actors have more interesting characters in their TV series. The big event in the film is supposed to be Molly's 18th birthday, but somehow it just slipped by like the rest of the film. But not fast enough. Rated PG-13 for strong thematic material, violence and terror, brief strong language and some teen drinking. 86m. At the Broadway, Mill Creek and Fortuna.

BEVERLY HILLS CHIHUAHUA. Pampered dog winds up on the mean streets of Mexico. Rated PG. 91m. At The Movies and Mill Creek.

HIGH SCHOOL MUSICAL 3: SENIOR YEAR. Teen couple lives up their senior year lest they end their romance for college dreams. Rated G. 112m. At the Broadway, Mill Creek and Fortuna.

HUMBOLDT COUNTY. Straight-laced city guy gets caught up in The Lost Coast's counterculture. Rated R. 97m. At The Movies.

MAX PAYNE. Maverick cop forced to battle unnatural enemies in his quest for revenge. Rated PG-13. 100 m. At Mill Creek and The Movies.

THE NIGHTMARE BEFORE CHRISTMAS. Relive the king of Halloween Town's adventures in Christmas Town in 3-D. Rated PG. 76m. At Fortuna.

RELIGULOUS. Bill Maher's unusual spiritual journey around the globe. Rated R. 101m. At the Broadway, Mill Creek and The Minor.