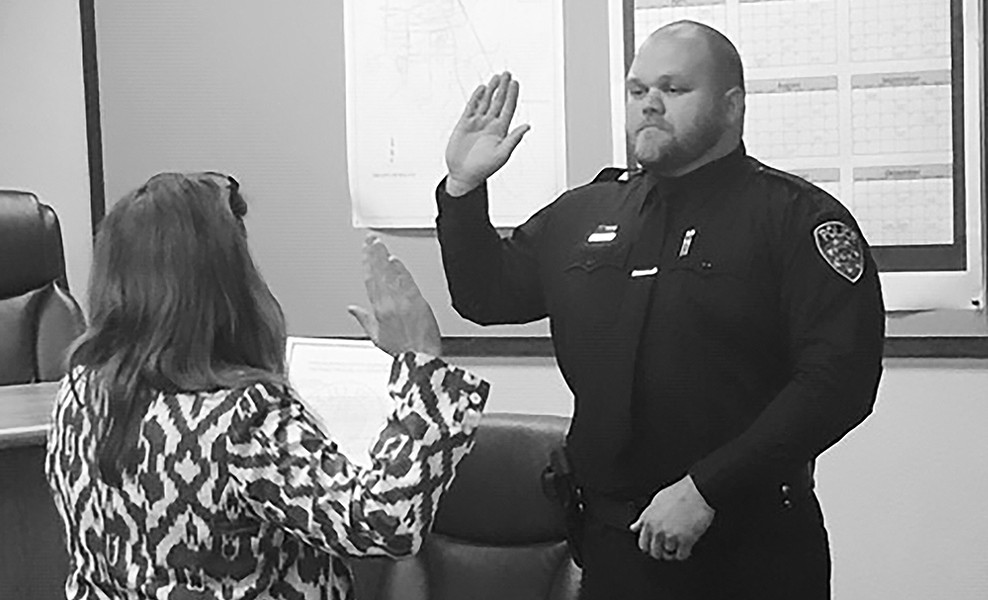 As we reported last month ("Badly Tainted," Sept. 26), Eyster penned a scathing, incredulous 2,400-word letter to Warnock expressing dismay at the chief's hiring of officer Jacob Jones, who left the Eureka Police Department after serving a month's suspension without pay as the result of an internal affairs investigation that found he lied to his superiors in an attempt to hide "defective or incompetent" police work and failed to adequately report the use of force in a separate incident. In addition to dismay at Jones' hire, Eyster also expresses his anger that Warnock did not inform him of Jones' past, leaving Mendocino County's top prosecutor to learn about it by reading the Journal's Aug. 29 article "Light in Dark Places."

Well, after reading Eyster's letter — which advised that the sustained findings of dishonesty in Jones' past rendered him a "Brady officer" in Eyster's eyes, unusable as a witness in criminal court proceedings — Warnock wrote back Oct. 2 to plead his case. It wasn't well received. And there are indications that Jones has made additional incorrect statements about his time in Eureka.

Replying to Warnock's letter, which attempts to explain what he considers mitigating circumstances in Jones' past that explain away the findings of the EPD investigation, Eyster on Oct. 7 wrote that he'd read and considered the letter, as well as a Sept. 23 Facebook post from Jones, in which the officer attempts to "defend" himself and essentially argues he was unfairly targeted by superiors at EPD because he intended to leave the department.

"In response to both your letter and Mr. Jones' post, all I will say in summary is that the two of you just don't get it," Eyster writes, before referring to the U.S. Supreme Court case of Brady v. Maryland, which requires prosecutors to turn over any exculpatory evidence they have in a case, which subsequent courts have determined includes any evidence of past instances of dishonesty by investigating officers.

Eyster has been firm in his stance that EPD's finding that Jones lied to his superior officers to cover up the fact that, while responding to a call about a dog that had been fatally shot in its owner's backyard, he'd failed to take photographs of the animal and the crime scene renders him a Brady officer. Consequently, the prosecutor has said his office cannot call Jones as a witness because he lacks credibility and that he will dismiss or plead down any case dependent on the officer's testimony.

In his Oct. 2 letter to Eyster, Warnock repeats some of the information in Jones' Facebook post, including that while investigating the report of the dead dog, Jones "had to break away to go to another call of a man with a gun."

But according to EPD Chief Steve Watson, dispatch records from the day indicate this isn't true.

At the Journal's request, Watson asked EPD Records Supervisor Amanda O'Neill to review the records. The chief said they indicate that the only report of a "man with a gun" was included in a stolen vehicle recovery call, which began at 4:21 p.m. on May 25. While officers were working the call for nearly five hours, Jones was only on scene from 4:51 to 5:48 p.m., according to the records, after which he was dispatched to the dog call at 5:55 p.m. After being on scene for less than seven minutes, Jones cleared that call with dispatch. About two minutes later, he was dispatched to a report of a reckless driver. So, according to Watson's rundown of the dispatch records, Jones left the scene of the dead dog without being pulled away to anything else, much less a man with a gun.

In Warnock's letter, the chief also uses quotation marks when referring to Jones' "alleged dishonesty" and refers to the officer's subsequent suspension as "days off without pay" before deeming the investigation's findings "the opinion of one person at EPD, who was backed by the chief." And Warnock indicates that Jones only decided to drop his appeal of the suspension because "his legal counsel did not notify him that this was an issue that could be considered a 'Brady' issue that could affect his career. According to Jones, if he had any idea that anyone would have considered this a potential 'Brady' issue, he would have fought it."

While it's unclear what Jones' attorney Julia Fox told him privately, her comments during a hearing before Watson indicate the stakes were somewhat clear.

"It would be illogical and idiotic for him to completely foreclose his ability to pursue (police) work by being dishonest over something that's chicken shit, his taking photos of a deceased dog," she said, before urging Watson to overturn the finding Jones had been dishonest.

Warnock's letter also states that he was told by a captain at EPD in April that Humboldt County District Attorney Maggie Fleming had "reviewed the IAs against Jones and determined there were no issues," which doesn't make sense because Jones' appeals were still pending at the time, which would have legally prohibited Fleming from reviewing the files, something a police chief should have known.

Further, when Jones abandoned his appeal, closing the investigations, Fleming did review the files and, like Eyster, decided she couldn't call Jones to testify in any criminal proceedings, compromising a dozen or so cases.

Warnock closes his letter by telling Eyster that he's come to know Jones and his family, finding him to be a "kind, diligent and hard-working officer" and "devoted family man with many community ties."

In his reply, Eyster indicates that none of that matters and Warnock should have ended his letter after offering a show of contrition to the prosecutor in its second paragraph for not proactively disclosing EPD's findings about Jones.

"In the context of Brady v. Maryland, it doesn't matter whether a Brady cop has a supportive family, that he grew up in a particular community, that he has friends who like him, that his fifth grade teacher thought he was kind, that his past or present co-workers think he's a good guy, that he may be a good husband, father or neighbor, or that his law enforcement boss believes him over sustained findings of dishonesty and cover-up found to be true by his prior law enforcement employer," Eyster wrote. "It doesn't matter that he chose for whatever reason not to appeal the adverse findings to clear his name."

"I have now read your letter and Mr. Jones' community explanation," he writes. "Other than to create greater urgency and to reinforce my belief that my staff and I must keep a close eye on your hiring practices and legal judgment, nothing else has changed. I have designated Mr. Jones as a Brady cop and that designation shall remain. There is nothing more that needs to be discussed. That said, I am not telling you what you should do with Mr. Jones; I am simply telling you that Mr. Jones cannot and will not be used as a witness in any criminal proceedings filed in Mendocino County.

"If you choose to allow him to be placed in a position where he becomes a necessary and material law enforcement witness in a criminal matter, you should be ready to explain to victims, witnesses and others why that case will not be or was not prosecuted."