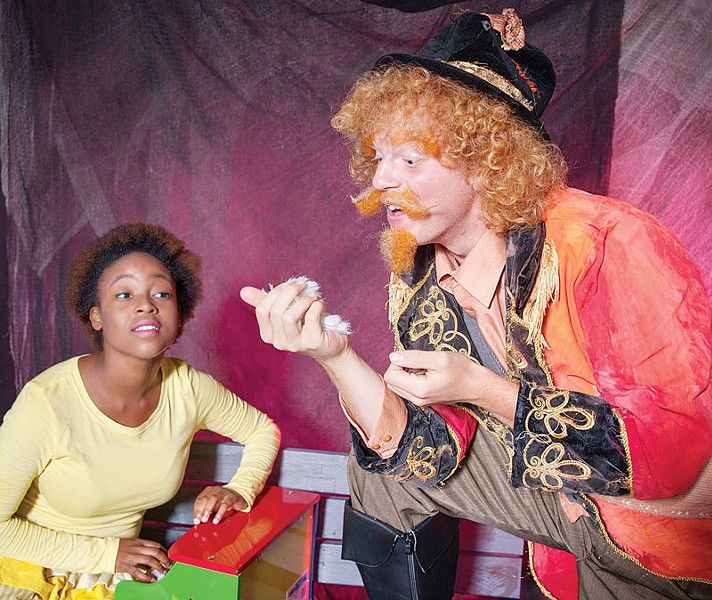 At its heart, Coraline is a story about things that are not what they are, so it's fitting that in its adaptation for the stage it becomes a musical that is not quite a musical and a story about a child that is not really geared toward children. The show challenges expectations (it doesn't even have an intermission) and at times feels more like a performance art piece than a stage musical. This is an odd show to be sure, but much of Coraline's adventure is about learning to be brave and taking risks, and for her efforts, she is rewarded with a better understanding of her place in the world and a deeper appreciation for the people in her life. The unfamiliar staging is unsettling in a way that provides audience members an opportunity to be brave, too, to take risks and walk away with a new way of looking at the worlds they inhabit.

Coraline: the Musical is based on the fantasy/horror novella by Neil Gaiman, with music and lyrics by Stephin Merrit and book by David Greenspan. Merrit may be more familiar to some for his role as lead singer and songwriter for indie band The Magnetic Fields. In the story, young Coraline has recently moved to an odd new home with weird new neighbors. She's a curious child with stereotypically overworked and under-attentive parents, which leaves her lots of time for her favorite activity: exploring. Her investigations lead her through a door to another world — one which at first glance looks like a more perfect version of her own, complete with a new Other Mother. As Coraline explores this flipped reality, she realizes that not all is as it seems and must learn to trust herself and some new friends she meets along the way in order to ultimately save the day.

The show's odd pacing may be attributable to its writers rather than something unique to this production. As mentioned, this isn't a traditional musical in any sense. Rather than the orchestra one might expect, musicians Brian Post and Charles Thompson use everything from toy pianos to an umbrella to create music that is as much atmosphere as accompaniment for the performers. Many of the musical numbers are quite short and all are performed nearly a cappella. The set is abstract and expansive. It provides lots of levels for the actors to play on, but there are moments that the action feels too small for the space. Against this blank slate of a set, the costumes more than rise to help provide color, character and mood. The show is worth taking in just on the merits of the visual treats provided by costumer Marissa Menezes' and makeup/mask designer Hanah Toyoda's work, brought to life with help from students in the Humboldt State University Costume Workshop. It is especially pleasing to watch the costumes shift as Coraline discovers the secrets of the world behind the door. The cast is also joined by some beautifully designed puppets. This production is certainly an ensemble effort with many actors taking on more than one role. As the plucky protagonist, HSU senior Erin Harris is charming, especially in numbers like "The Ballad of the Wasps," a song about finding courage. Actress Anna Duchi capably takes on the role of Other Mother, no small challenge as the character grows to become truly larger than life by the dramatic climax. As Coraline's downstairs neighbors, Ms. Forcible and Ms. Spink, Jesse Chavez and Hannah Jo Clark embody the strange charm that permeates the story, deftly switching to play each other's roles in the other world. Kyle Rispoli convincingly plays both versions of upstairs neighbor Mr. Bobo, and actress Patrice Imani Elise-Byrd is notable for bringing a strong physicality to the role of the cat.

HSU's production of Coraline: the Musical is directed by Rae Robison, with vocal direction by Tina Toomata and musical direction by Brian Post. Ellen Martin served as assistant director. Scenic and prop design is by Jared Sorenson. The lighting is designed by Santiago Menjiva and sound design is by C.J. Thompson. The production is staged in the Van Duzer Theatre at HSU and runs through Oct. 26, with performances Thursday through Saturday at 7:30 p.m. and a Sunday matinee at 2 p.m.

North Coast Dance and Ya Habibi Dance Company make the living dead significantly more graceful in Zombie Ballet at the Arkley Center for the Performing Arts on Friday, Oct. 24 at 6 p.m. Don't let the $75 ticket for this fundraiser scare you off — it includes a VIP ticket for The Nutcracker later this season, as well as a membership.

The ArMack Orchestra, which features students from Arcata and Mckinleyville high schools, will hold their annual silent film fundraiser at the Eureka Theatre. The student orchestra will provide the sound effects and score to the classic comedy Our Hospitality, starring Buster Keaton. Performances will be held on Saturday Oct. 25 at 7 p.m. and Sunday, Oct. 26 at 2 p.m. Tickets are $7, $5 kids. 633-5551.