A Breakfast Odyssey, or Breakfasts I Have Known

Beyond eggs over easy 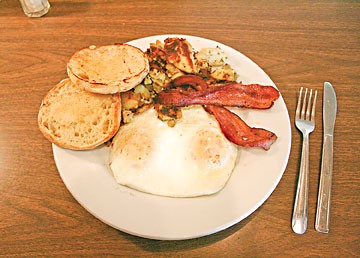 When I was 16 and had my learner's permit, my father conscripted me to drive him to a mine site several hours into the Chiricahua Mountains. We left Tucson at 5 a.m. and had breakfast around 7 at a truck stop in Wilcox. For the first time in my life, I could order anything I wanted for breakfast. Suddenly, I was starved. He watched bemused as I devoured a sirloin steak and warm apple pie with cheddar cheese melted over it. It was absolute Heaven! I've never looked back.¬†

Breakfast: the first meal of the day. No aspect of world culture could be more varied, and no distinction between rich and poor more dramatic. For most of humanity, it is very basic. Porridge, for instance. ("Pease porridge hot, pease porridge cold" refers to the remnants of a pea-soup supper eaten cold the next morning.) In some parts of the world, rice gruel is common; in others, some form of bread, perhaps dipped in tea or milk. In Southeast Asia it is soup; in Southeast Europe, yoghurt or kefir. Generally, cold climates tend toward more substantial and hot (oatmeal in Scotland), while warm ones tend to lighter and cooler (feta and olives on Crete).

In earlier times, of course, dinner — served at mid-day — was the main meal. In the early 18th Century, William Byrd of Westover usually took boiled milk, or occasionally chocolate, for breakfast. Benjamin Franklin, working as a printer in London at the age of 19, consumed only barley water, and wrote disparagingly of his press-mate, who drank beer ("I thought it a detestable Custom. But it was necessary, he suppos'd, to drink strong Beer that he might be strong to labor").

This column is not about world breakfasts, however, nor about history; it's about me.

Breakfast: in theory, a simple meal. Yet I've never been able to relax into the comfort of the same thing every morning. Lord knows, I've tried — hominy grits can be marvelous, but unless I want to do it right, stone-ground, cooked perfectly and served immediately, it's mucilage. Nancy's Yogurt with fruit isn't bad, but cold stuff is not what my body wants in the morning. And dry cereal is the very antithesis of food, with or without milk. In fact, breakfast cereal is the invention of the 19th century mountebank Rev. Sylvester Graham, who conceived it as a cure for "lust." It is certainly that.¬†

I am a breakfast eclectic. I enjoy all manner of things, from a grilled cheese sandwich to milk-toast. Often, it's leftovers — like soup, stew, chili, warm cheese on cornbread or thin slices of steak on a toasted baguette slice.¬†

As with all good marriages, Beni and I have found virtues in each other's quirks. Cutting-edge sushi I learned from her, odd breakfasts she learned from me. While we normally have a modest breakfast, on vacation we are adventurous. We have in our travels found succor in Virginia (salt-cured) country ham and biscuits, pozole, goat tacos with queso a?±ejo, rabbit burgoo, baked macaroni and cheese with ham chunks and link-sausage/ripe tomato sandwiches on salt-rising bread. Dim sum, of course, is a platonic ideal, a parade of small tastes (at its authentic best including exotic dishes like duck feet and sweet rice pudding steamed in lotus leaf).

We suffered in France, where there is nothing available but potent coffee and bread until after noon, though we were occasionally saved by bakeries with fresh, warm croissants filled with molten dark chocolate. But in one Yorkshire inn I was served a traditional English breakfast of gammon (Canadian bacon, only better), sausage, black pudding (good, just don't ask what's in it), a basted egg, broiled tomato, sautéed mushrooms and griddled potato cake. Beni got perfect soft-boiled eggs presented in porcelain egg cups, and "toast soldiers."

A decade ago, in San Anselmo, we had grilled trout with caper salsa at Bubba's. At Tubby's Dinerin Cotati, breakfast was so good that on trips to the city, we try to spend the night nearby. Printed on the menu: "Ask about our hash of the day." Translation: It's made right here, from yesterday's leftovers. And as we all know, leftovers are better the next day.

More recently, at Zenon Café in Eugene, there were marionberry turnovers, a toasted hazelnut waffle and chicken fried pork steak with black pepper gravy and eggs.

Nice. But we do pretty well in Humboldt.

At Eureka's GOFISH we've had fish-and-chips on the breakfast menu, perfectly moist cod and a crisp batter, with crunchy shoestring potatoes. McIntosh Country Farm Store in Arcata offers a "design-it-yourself" sandwich, featuring their own savory rolls and options such as grilled onion and mushroom, Dijon mustard, horseradish and seven cheeses. Toni's, just across the freeway, can improvise, given the opportunity: I recently had a sausage-cheddar-Ortega chile sandwich on grilled rye. Equally versatile is V&N Burger Bar on Samoa Boulevard; their hamburgers (meat ground fresh daily by Murphy's Market) — yes, I have burgers for breakfast! — are heirs of the fabled Maggie's in McKinleyville, displaced a decade ago by an avaricious used-car lot owner.

Many other imaginative local breakfasts have disappeared, mostly victims of bad, cheap, chain food and "Humboldt Restaurant Syndrome." Once, at the legendary Rolf's in Orick, we had the "German Farmer's Breakfast," a platter of sausages, eggs, potato pancakes and red cabbage. There was Vern's Blue Room, on a back road in Ferndale, where Ingrid made a kind of German kitchen-sink omelet called "Hopple Popple." And nothing can top the mythic Al's Diner in Rio Dell, where, in 2003, we were served a breakfast of wild boar hash, topped with a poached duck egg.

In the annals of gastronomic excess, attention must be paid to the Edwardian English country-estate breakfast, particularly the lavish buffet at a fox hunt. There, the covered chafing dish came into its own, a lengthy table with choices ranging from roast beef and mutton, gammon, sausages and patés to deviled kidneys, fricassees, game pie, kippered herring, grilled trout and salmon, together with eggs scrambled, shirred or poached with white sauce or Hollandaise, and cakes or jam tarts — everything piled onto a huge silver charger. Thorsten Veblen's term "conspicuous consumption" springs to mind.

All else aside, however, there is no contest in the battle for breakfast supremacy. Never has been. New York Jews win by several lengths. Whether judged by flavors, sumptuousness or variety, the delis and dairy restaurants of Manhattan provide a cornucopia unmatched.

I have potent memories of Ratner's, a kosher dairy establishment on the Lower East Side. Velvety lox (the best is called "Nova Scotia Salmon" — the fatter North Atlantic fish is a major step up from Pacific) and the rarer but no less wonderful smoked freshwater whitefish, sometimes served together on a platter with cream cheese and bagels. Cheese blintzes made from scratch, often accompanied by sour cherry jam, in the Polish style. Latkes — the potatoes coarsely shredded to give more surface crispness. Knishes with pastry like Southern piecrust and filling redolent of caramelized onion. Beet borscht, with a dollop of sour cream. Oy, I almost left out gefilte fish. Forget that sorry stuff you see in jars in the store; real gefilte fish is a poached pike quenelle, a dumpling lightened by stiffly beaten egg whites, served with creamed horseradish.

If dairy restaurants were all I could cite, that would be enough. But there is also delicatessen (Yiddish/Altdeutsch for "delicious edibles"). Speaking of lost local gems, one of the best delis I've known was The Best Revenge in Eureka in the late 1980s. Scraps of corned beef, pastrami and tongue from the slicer were used as filling for addictive meat knishes.

Whew! A long journey from steak and apple pie.

But wait! My co-conspirator, culinary writer Linda Eckhardt, asks, "If breakfast were to be your last meal on earth, what would it be?" Excellent question.

So, at the end of an all-night party, breakfast for us and six guests, at Auberge de Soleil, overlooking the Napa vineyards, in the fall, just before harvest. We'd start with vintage Roederer Cristal 1997 Brut Rosé Champagne and raw Kumamoto oysters with Beni's mignonette of lime juice and zest, Pepper Plant Sauce and horseradish. Then tiny cones of gravlax stuffed with crab and topped with caviar.

Second course: I've always loved fried mashed potato cakes (bound with egg), and Yellow Finns are a perfect vehicle for black truffles. I'd shave some into the mixture — lots, actually — then cook them in goose fat. Paper-thin bacon would go well with that, so let's import a cave-aged Pancetta Stufata. (Since U.S. Customs doesn't allow it in the country, we'll have someone bring it over by private jet. And as long as he's in Europe, why not stop by Paris for truffles, foie gras, Vacherin and macaroons?) With the potato cake and pancetta, we'd have Eggs Picabia, and a roasted poblano/Seville orange/pineapple salsa. Followed by Pinot Noir grape sorbet, as palate-cleanser.

Fourth, communal containers of Vacherin, an unpasteurized cheese so runny it must be eaten right from the box with a spoon. Fifth, macaroons from Ladurée in Paris, and French-press Kopi Luwak coffee with heavy cream. What a way to go!