A Brief History of QR Codes 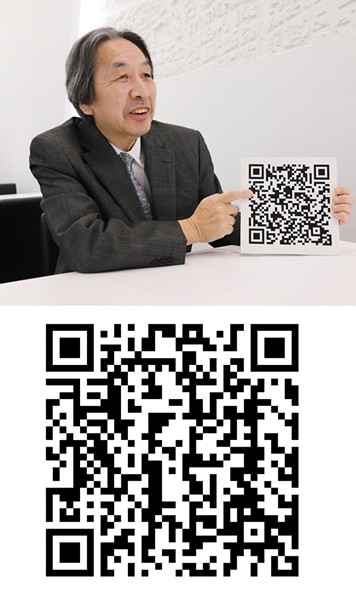 Courtesy of Denso Wave Masahiro Hara with his invention, the QR code. Scan the code below the photo with your smartphone to read a Very Important Message.

"I used to play Go on my lunch break. One day, while arranging the black and white pieces on the grid, it hit me that it represented a straightforward way of conveying information. It was a eureka moment." — Masahiro Hara, quoted on Nippon.com, Feb. 10, 2020.

If you've eaten out lately, you might have been invited to scan a QR code to view the menu on your phone. During the COVID-19 crisis, many restaurants adopted this tactic to avoid having to disinfect their printed menus after each use. QR-linked menus are just one of many practical uses to which these now ubiquitous symbols have been put. They've been popping up everywhere over the last few years: on airline boarding passes; beside museum artifacts and paintings and sculptures in art galleries; in magazine ads, linking to a product's website; on gravestones, giving a bio beyond the minimal dates of birth and death; and much more.

Anyone familiar with the Japanese game of Go — black and white stones played on a 19-by-19 grid — will understand Masahiro Hara's above-mentioned moment of insight. In 1994, Hara was a 35-year-old engineer with the industrial equipment manufacturer Denso Wave, part of the Japanese Toyota Group. He knew that the multiple barcodes on automobile parts were slowing down Toyota's kanban, or "just-in-time," production system. A barcode typically codes for 20 alphanumeric characters, meaning that some products had to be branded with up to 10 barcodes to hold all the required information. It was clearly inefficient to have workers scan all of these, sometimes thousands of times a day.

Hara and his team essentially turned a one-dimensional bar code into a compact two-dimensional grid that could be read swiftly — QR stands for quick response — while accuracy and redundancy is achieved with the so-called Reed-Solomon system for error detection and correction. The amount of information to be conveyed determines the size of a QR grid, from the smallest (21-by- 21 "modules") to the largest (177-by-177). If, for instance, you need to encode a 100-digit number, you'll need a 29-by-29 QR. (In the photo above, Hara is holding a 33-by-33 QR.) A scanner uses the three "position detector" corner squares to normalize the image, taking into account its size, angle and viewing angle. Next time you're waiting for a flight, pass the time by counting the modules in the QR code on your boarding pass. (It's likely 57-by-57.)

Denso Wave strategically decided not to patent the code technology but rather to make it freely available, encouraging its use and establishing QR standards. Instead of making money from licensing fees, the company profited by selling the scanners needed to read the codes. A breakthrough came in 2002. when Sharp introduced a cellphone with a built-in QR code reader. Today, with over 6 billion smartphone users globally, 80 percent of the world's population can now take advantage of this handy way of exchanging information.

Hara is getting ready to retire. When a reporter for the Japanese daily Mainichi Shinbun asked him recently what he planned to do next, he replied, "I want to get into farming, developing new varieties of fruit and vegetables to make them more delicious." That, for an engineer like Hara, sounds like just one more juicy challenge to be solved.