'A Broken Vessel' — Who was Martin Cotton, and what happened to him? 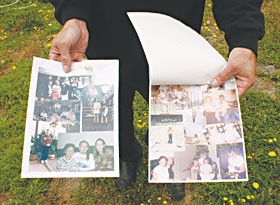 Martin Frederick Cotton II was not homeless. The 26-year-old man, who died in the Humboldt County Jail on Aug. 9 shortly after a violent confrontation with the Eureka police, always knew that if he was in trouble, the only thing between him and shelter was a call to his father, Martin Fredrick Cotton, who lives in Loleta in a house overlooking the Humboldt Bay Wildlife Refuge.

But even the elder Cotton's bucolic home can't provide the kind of refuge the grieving father needs now.

"Fred was a good friend," Cotton said, using his son's nickname. "He would give you the shirt off his back."

Now, two weeks after his unexplained death, many residents, including those who witnessed his confrontation with the police, still have more questions than answers. And despite Eureka Police Chief Garr Nielsen's promises of transparency in the subsequent investigation, some wonder if the EPD could have handled the arrest better.

On Aug. 9, the Eureka Police Department received a call about a disturbance at the Eureka Rescue Mission. Bryan Hall, house manager of the mission, phoned the police after an altercation involving Cotton broke out in "the cage," a fenced, outdoor day-use area for the homeless. Hall ejected Cotton from the cage after he punched a man in the temple without provocation.

That's when the police arrived on the scene. According to Nielsen, who held a town hall meeting on the incident last Thursday, officers initially used pepper spray to subdue Cottton. When that proved unsuccessful, they used hands, knees and nightsticks before finally getting him cuffed. All told, there were seven or eight officers involved, Nielsen said. After he was taken into custody, Cotton was given no medical attention because, according to Nielsen, he exhibited no signs of distress.

Cotton died about two hours after having been booked at the county jail. The autopsy report noted that he had suffered a subdural hematoma -- bleeding between the dura (the outermost membrane of the brain) and the brain. As of Tuesday, the Humboldt County Coroner's Office had not yet announced whether the hematoma was the cause of Cotton's death. The police involvement in the case is being investigated by the county's Critical Incident Response Team (CIRT).

At the Town Hall meeting Nielsen said that every indication was that Cotton's death was not a result of his altercation with the EPD.

"I do not believe that the actions of the Eureka Police Department were the direct cause of this man's death," he said. Speaking to the issue of medical attention, Nielsen pointed out that hindsight is 20/20. "It's easy for us to look back now and say the prudent thing would have been to take him to the hospital," he said.

At that same meeting, Hall described the Martin Cotton he saw in the cage that day. "I've never seen the look in Martin's eyes that day -- Martin wasn't Martin," he said. "He was like a wolf looking for something to eat."

Hall watched the whole altercation between Cotton and the police unfold, and said that he was never kicked or hit in the head by officers.

Nielsen said that the discovery of Cotton's head injuries "raised some huge red flags for him." However, a video from the jail documented Cotton hitting his head against the cell wall. Since no witnesses reported seeing Cotton hit or kicked in the back of the head, Nielsen said the suspect's actions in the cell provide the most likely explanation for the hematoma.

Christina Allbright, a deputy public defender, asked why none of the officers involved had been placed on administrative leave. Nielsen replied that there was no call for that.

"Not one [witness] has come forward and said the police used excessive force," Nielsen said.

But others who witnessed the scene have concerns.

One employee of a nearby business, who didn't want his name to be used because he was worried he'd be "harassed" by the cops, had a bird's eye view of the altercation. He was standing above the rest of the crowd on a picnic bench across the street from the cage. According to him, he was the only person up that high.

"I saw him getting hit with the bottom of the hand in the back of the head," he said. "They call it a hammer fist. I saw him kicked in the ribs, kneed in the kidneys and batoned on the back of his calves numerous times." The employee said he'd given the same information to CIRT investigators.

Mike Flowers, who works for MD's Tree Service in Eureka, was across the street from the Rescue Mission getting his truck fixed at Antich Automotive the day of the incident. Flowers said he was never interviewed by investigators. In a phone interview on Monday, he described a moment of the confrontation between Cotton and the police in the following way: "Two cops had him pinned against the fence and they said, "Stop resisting," and he said, "I'm not resisting." Then, he [a third officer] came up and -- wham -- he kicked him."

When Flowers" wife tried to record the incident on her cell phone, the police told her to put it away. Was it a normal arrest in Flowers" opinion? "It was very excessive," he said. "It was out of control."

In the past 16 months there have been four police-related deaths in Eureka: Cheri Moore, Christopher Burgess, Jonni Honda and Zachary Cruz Cooke. In three of the four cases, a District Attorney review has found that police officers acted properly. The DA has yet to release findings on the Cheri Moore case. However, the families of Moore and Burgess have sued the City of Eureka, and the family of Cooke may also do so.

On Monday, Cotton's father said that he wanted justice for his son, but he was still grieving. He and his wife -- Fred's step-mother -- returned late Sunday night from a memorial service for his son held in Sacramento, where he was born on Sept. 3, 1980. Fred's sister Jessica, who lives in Fortuna, also traveled to Sacramento with her father to celebrate her brother's life.

Cotton remembered his son as a free spirit with a lifelong interest in the arts.

"Anything you'd want him to draw he could make it up for you," Cotton said. "He had a gift."

In high school, Fred also trained as a junior paramedic and, according to his father, helped save a lot of lives.

After high school, Fred got jobs in telemarketing and sales in the Sacramento area. He also designed business cards and logos for people, as well as tattoos. Then in his early 20s, something happened that compromised Fred's mental health. Cotton isn't exactly sure what caused what he believes was schizophrenia in his son, but he thinks it was triggered by a drink laced with drugs Fred was served in a Sacramento bar one night. Regardless, Fred's life was altered irrevocably.

In April 2003, Cotton moved to Loleta. A year later, Fred relocated to Humboldt County as well. Cotton paid for his son to be put into an assisted living program in Eureka, but that only lasted a couple months. Fred was unhappy with the guys he was living with and the quarters were too close for comfort, Cotton said. So Fred tried living with his father for a while, but the kind of friends he brought around weren't the type Cotton was comfortable with. Eventually, Fred was back on his own, but it was always understood, according to Cotton, that if he needed help out of a bad situation his dad was only a phone call away.

On Aug. 2, Martin Frederick Cotton II was arrested by the Eureka police and incarcerated for possession of a controlled substance. He was released from jail on Aug. 9 at 2:32 p.m. He made his way over to the Rescue Mission and eventually, after a confrontation with the EPD, ended up back in jail. But this time, it would be his last time behind bars. He was pronounced dead at 7:40 p.m., just one day after his father's 50th birthday.

The soft-spoken Cotton didn't cry when we spoke, though it was obvious some things were more difficult than others for him to talk about. When he saw his son's body at the county morgue he remembers his bruised legs, back, neck and face as well as a gaping wound on Fred's right hand.

"He was a broken vessel," Cotton said. "I wish I could have been there to stop it."