Dick Taylor Craft Chocolate and Humboldt Bay Coffee Co. are moving in together 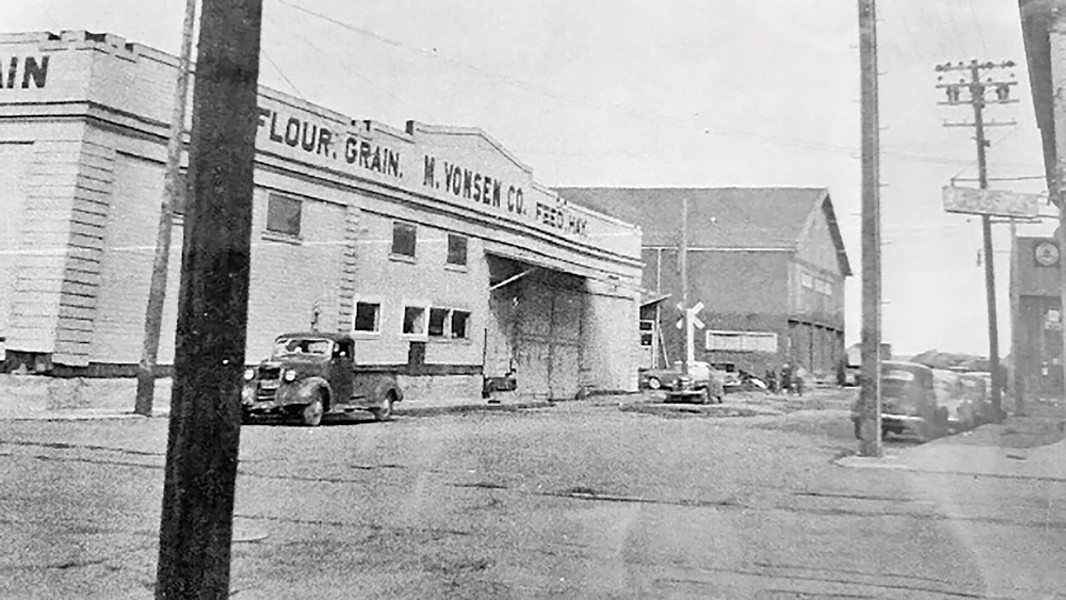 Courtesy of K. Boodjeh Architects A shot of the "opera building" circa 1950.

Courtesy of Dick Taylor Craft Chocolate The corner of the rehabbed building that once housed the North Coast Co-op and will soon be home to local chocolate and coffee businesses.

If all goes to plan, by this time next year, the sea air along Eureka's waterfront could carry notes of coffee and chocolate. The former home of the North Coast Co-op, empty since 1992 and rehabilitated by the late Pierre LeFuel and Karen Banning, is to be home to an expanded Dick Taylor Craft Chocolate and Humboldt Bay Coffee Co.

"More space means more goodies," says Brianne Taylor, sales and marketing manager at Dick Taylor. That applies to the currently limited room for chocolate bars and baked goods, as well as tours and tasting events. The new venue is being designed for "more of a café experience." Humboldt Bay Coffee Co. will follow suit, while keeping its main roasting facility off site, it's leasing the spot on the corner of First and E streets to open a café of its own.

Dick Taylor's current digs are in Eureka's so-called "extraction alley" on Fourth Street, zoned for cannabis production and thus able to command higher rent than is practical for a chocolate company. Though the move is an expansion rather than a cost-cutting measure, as the bar-to-bean business hasn't suffered the financial crush its owners first expected when the pandemic first hit.

In March, co-owner Dustin Taylor says, "We laid everybody off for those two weeks thinking it was gonna be a rough year." Instead, "We were fortunate enough to be in that spot where our business grew." Before COVID-19, much of its income was from wholesale accounts that either sell or use Dick Taylor as an ingredient in their products, from locals like Slice of Humboldt Pie, Eel River Brewing Co. and Humboldt Cider, as well as far-flung businesses like Portland's Salt and Straw, Winston Pies in Los Angeles, and coffee shops in the Bay Area and beyond.

As those fell off, Brianne explains, the business pivoted to grocery store accounts and website sales, offering the enticement of free shipping. Online sales grew some 400 percent. It turns out the homebound public wanted chocolate. "It's actually been great," she says. Now even wholesale business seems to be rebounding and with the heavy "chocolate season" of September through December over, it's a good time for a move.

The purchase of the building has been in the works for two and a half years, says Dustin Taylor. He says he and co-owner Adam Dick originally talked with Pierre LeFuel and his wife Karen Banning about the location's possibilities before LeFuel's death in 2017. The couple had been rehabbing its badly sagging wall and rebuilding its foundation, as well as replacing leaky roofing, and looking at options for turning it into a hub of tourism, an arts space and a showcase for local businesses and food. When Banning died in 2018, the sale of the property to Taylor and Dick was in escrow, Taylor says, and had to start over.

The new plan for the building isn't so far off from those early ideas, as Taylor and Dick are hoping to create a "tourist destination of a chocolate factory" in the spirit, if not on the scale of, Ghiradelli Square in San Francisco. Along with room for more events, sipping chocolate drinks and eating treats, plans include a glass hallway so visitors can tour the factory space without the hassle of donning a hairnet. They're planning to do some of the work themselves and looking at opening by the end of the summer, but, says Taylor, "Adam and I were carpenters and we're realistic." They're also talking with the city about outdoor seating in a "parklet-like structure" near the tracks for the trolley the Timber Heritage Society is hoping to run downtown.

Humboldt Bay Coffee Co., says Taylor, is a good fit both for its "similar nautical vibe" in branding and packaging, but for its potential to draw more business and traffic to the waterfront.

Luci Ramirez, formerly Humboldt Bay Coffee Co.'s accountant, bought the business with her husband, Thomas Carter, in 2013. The operation has since outgrown its Opera Alley location. "We've made it work but it's kind of bursting at the seams," she says, adding it was important to find another space in Old Town, as it felt "like home." Last year, a casual conversation with Dick at a Friday Night Market sparked the idea for leasing a portion of the chocolate maker's future building.

While the roaster sells its coffee to a number of cafés in Humboldt, Napa and Sacramento, Humboldt Bay Coffee Co. hasn't had one of its own since the previous owner sold the retail operation that's now Old Town Coffee & Chocolates. If all goes well with the city, Ramirez says, the corner café will have some outdoor seating, too. "My goal is to have a coffee place that's not like anything we have in Humboldt County," she says, focusing on pour-over and single-origin coffees, showcasing both their flavors and their stories. "I think it'll be a good pair with Dick Taylor."

Ramirez is aiming to open for the 2021 holiday season and looking forward to giving the staff room to breathe with the upgrade from 2,000 square feet to 5,000 square feet on the waterfront. She's excited about the building itself, too. "It's one of the last buildings that's been sorta torn down and had no love."

The building itself has plenty of history. Architect Kash Boodjeh, who started working on the 333 First St. property with LeFuel and Banning in 2015 and is working on the current renovation, says it built in three parcels, the oldest one dating to around 1850. That eastern portion would have been among some of the first sites developed by settlers who put up waterfront lodging, saloons and brothels to serve the shiploads of people coming into Humboldt Bay. "That was the place to be," he says. While the outer shell of the "opera building," as it's called, was built in 1945 by the Vonsen Co., its original corner survived earthquake damage and a fire, and the second floor once served as a dancehall. "They had a good time up there," says Boodjeh.