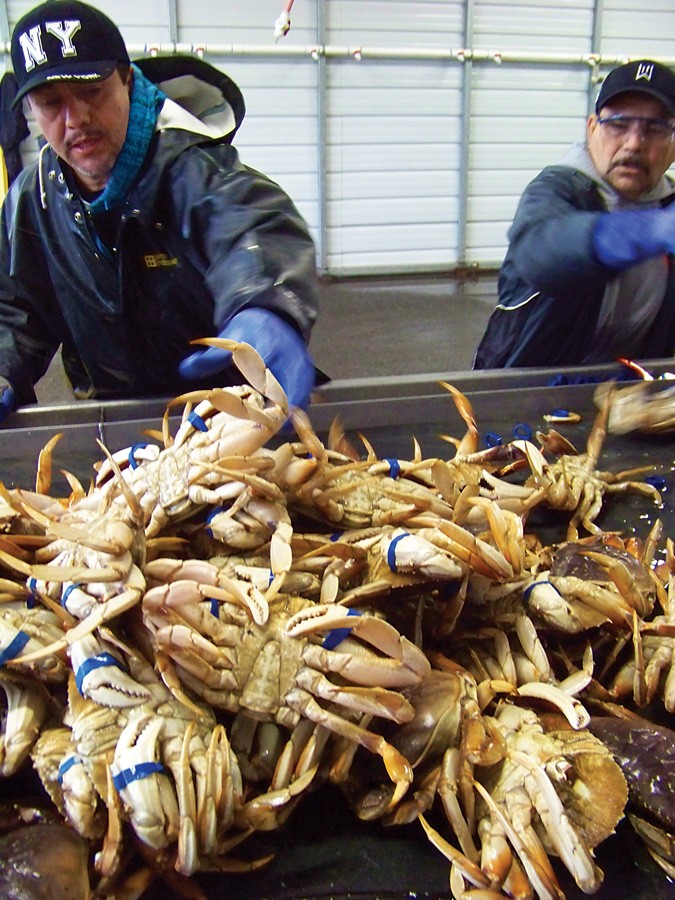 On the north coast of California, humans have been spearing, grabbing or enticing Cancer magister into traps since time immemorial. In those early days, people boiled their crab in hot sand or roasted it in fire and gobbled it up; the table wasn't far from the crab's home.

These days, however, some of our locally grown Dungeness crabs may travel, alive, thousands of miles before dying in a Beijing or Shanghai kitchen and being consumed by a delighted member of the growing Chinese middle class.

This fate is becoming more and more common -- the result of a combination of increased demand and, in recent years, a prodigious crab catch. (Much of the California crab comes from Crescent City and Eureka, the ports with the most landings in a normal year, although last year central California's crab catch blew the rest of the bunch out of the water, said Peter Kalvass, an environmental scientist with the California Department of Fish and Game.)

In calendar year 2009, according to figures gathered by the National Oceanic and Atmospheric Administration, California exported 25,000 pounds of live Dungeness crab overseas, mostly to China. In 2010, the state exported 250,000 pounds. And in 2011, just through August, it exported 445,000 pounds. The total amount exported from the United States -- Oregon, Washington and California -- overseas (again, mostly to China), rose from 221,532 pounds to 1.4 million pounds from 2009 to 2010. By July 2011, the U.S. had already exported 2.2 million pounds. Even more U.S. Dungeness is going to China, however, by way of Canada -- more than 16.6 million pounds in 2011, according to NOAA. (None of these figures include exports of canned and frozen crab, which also have increased.)

Washington State used to be the main live-crab exporter, until Oregon and California fish processors jumped in. Local buyer and fish processor Bill Carvalho, president of Wild Planet Foods, based in McKinleyville, began exporting live crab to China in 2009. He ships live crab across the United States, too. While he won't reveal how much he exports to China, he allows it's "significant." Carvalho buys from crabbers from Crescent City to Eureka to San Francisco; the animals get their claws rubberbanded (so they don't hurt each other) here in Eureka inside a crab-banding shed next to the new Fisherman's Terminal at the foot of C Street. Then they're trucked down to San Mateo County, where they're specially packaged and boarded onto passenger planes.

The final voyage of one of these China-bound live Dungies, from ocean floor to supper dish, could take as little as two and a half frenzied processing days. A strange end, if you think about it, for the orange-shelled fellow with the distinctive goat's head pattern on his back, who began his independent life just a few years before as a tiny hatchling larva floating on the surface of the ocean with the rest of the zooplankton.

Here in Humboldt, a Dungeness crab's life cycle begins in the "near-shore" ocean environment, in anywhere from 30 to 400 feet of water. There, between February and June, a female crab will first molt, shedding her hard exoskeleton, and find a male to mate with, explains Kalvass.

She'll hold the sperm and carry the eggs around -- up to 2.5 million of them -- before releasing the eggs and fertilizing them sometime between October and December. The little castaways float to the surface, where many of them become fish food. The survivors go through five larval stages, and by springtime will enter a sixth stage -- called megalopa -- in which they look like a crab with a tail and are about the size of a quarter.

Then, says Kalvass, "upwelling brings up nutrients they can feed on, and then they're transported around in the near-shore waters."

Some settle to the ocean floor; others float on currents into Humboldt Bay and settle to the bottom there; that's where Fish and Game puts out traps to catch the little guys to calculate how big the crab catch might be two years hence, when they've reached maturity.

The crabs go through numerous molts, getting bigger each time. Some might stay in Humboldt Bay, says Kalvass, but most seem to walk back out into the ocean, skipping and scuttling along until they reach the long, sandy plains and silty bottoms where they like to feed.

And that's where crabbers have known for more than 100 years to lay their crab pots.

A crab could live till it's 5 years old, undergoing up to 16 molts. But around about 2, a male Dungeness crab might be big enough to creep into a crab pot (baited, perhaps, with a juicy carp head) and be considered a keeper: a shell at least six and a quarter inches wide. Females and undersized male crabs, both illegal to catch, are usually small enough to walk back out the mandatory escape holes in the traps; if they don't walk out, crabbers are required to release them when they haul their pots up.

Kalvass said California commercial crabbers can take all of the legal-sized, male crabs available each year, as long they obey limits on the number of boats (about 600), number of pots (based on historical numbers), and length of season. Crabbing season generally runs November to June, although the starting date depends on when the crabs are big enough.

There are also limitations on how many live crabs can be sent overseas. As demand increases, and more and more processors get in on the live-crab export market, processors are fighting for space on passenger airplanes, Kalvass said.

Once in the crab pot, legal and male, the crab and its brethren make the journey to port in the hold of the boat.

At Wild Planet Foods' live-crab operation, the crabs are kept watered and oxygenated in large yellow totes inside the Fisherman's Terminal. Once banded, they're trucked in the totes to the packing facility in San Mateo County. Because of the competitiveness of the market, Carvalho won't say how they're packaged so that they arrive alive at their final destination. But Kalvass has heard that, for their overnight flight to China -- or wherever they're headed -- the crabs are kept chill and sleepy with CO2.