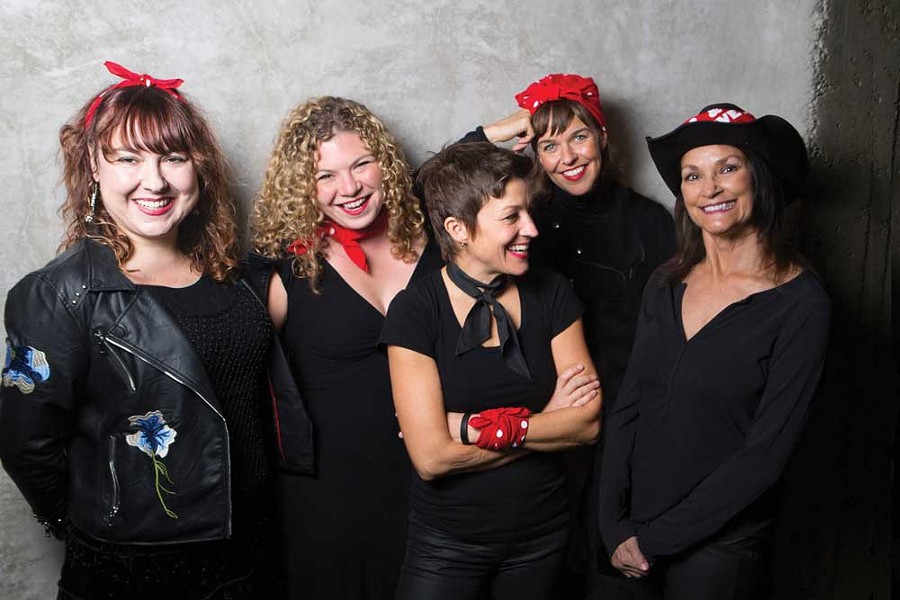 Courtesy of the artists Ashleigh Flynn & the Riveters play the Historic Eagle House on Saturday, Dec. 15 at 7:30 p.m.

When Tchaikovsky's ballet The Nutcracker debuted in St. Petersburg 126 years ago this week, it was generally considered to be a confusing and poor adaptation of the sourced Hoffmann and Dumas fairytale. The composer would die less than a year later, never knowing the heights of popularity that his work would enjoy in the middle of the next century. If you choose to check out the show's run at the Arkley Center for the Performing Arts this week from Dec. 14-18, you will not be seeing his creation as he imagined it. Rather, you will be enjoying a work which has been run through a long multi-medium collective process until it was minted into its current iteration. If you look closely, you will even find psychological touchstones from the various cultural gestalts from the dachas to Disneyland that have left their ghostly watermarks. Each handler leaves fingerprints, after all. But the music remains, whether in suite or full length, and a new century of narrative innovation will hopefully still preserve its sacred trust. Like a coral reef or a forensic skeleton, new life and uses are to be found for its now classic form.

Have a great run this week.

The purveyors of crowd participation-honed, horn-based dance music The California Honeydrops return to Humbrews tonight for what is certain to be a dynamic live show at 9 p.m. ($25, $20 advance). Expect a night of stomping soul grooves and dance floor shenanigans presided over by the best roots music spectacle from the band's Bay Area base of operations to leader Lech Wierzynkski's native Poland.

Psych, jazz and raga ramblers Ms. God are puttin' on The Jam tonight 9 p.m. ($3 suggested donation). Expect cyclical riffs and saxophonic passages with drums and rhythmic vocals. Also on the bill are the excellent and suitably heavy sounds of sympatico trio Frog. Rounding out the bill is a new band in town whose mysterious sound can only be reported on by this writer after I've seen the show. Moan Alisa is the name and that's all I know as of presstime.

Portland, Oregon's folk punk working class hero Casey Neill brings his band The Norway Rats to jam out bayside at the Eagle House this evening at 7:30 p.m. Touring on their newest album Subterrenne Mr. Neill and his large ensemble group of musical rodents will likely entertain all comers, particularly those of the ballad and anthem-loving section of society. Opening up the night are fellow Oregon coevals Ashleigh Flynn & the Riveters, whose roots rock tunes will make for a good pairing ($12, $10 advance).

It's Gaudete Sunday, aka the joyful third Sunday in Advent season, which makes it a perfect day for the religious and secular alike to enjoy a 3 p.m. matinee of the McKinleyville Community Choir's Holiday Concert at the Arcata Playhouse. The show is free — donations are appreciated — and the show will feature a live backing band and many of the usual suspects in regards to seasonal songs as well as tunes in Latin, Spanish and Czech. Czech? Could it be that the choir will be performing the famous English carol about the "good" Bohemian King Wenceslas — who was famously fratricidally murdered — in the modern language of his people? There's only one way to find out.

Local funky outfit Dan and the Americans play Blondies again tonight at 7 p.m. as a part of its ongoing odd-weeknight residency. The price is unknown to me but the show will likely pull a fun little crowd.

If music doesn't do it for you and you want a rare treat for the coming Winter Season, how about you head on down to Belotti Hall in Ferndale for some ice skating action? The last time I went ice skating was in the Harlem end of Central Park about 15 years ago and I got absolutely rinsed by some school kids who knew their shit on the blades and weren't afraid to school adults. Prior to that it was at least another 15 years back when we had a rink in my childhood neighborhood in San Francisco. I still remember the cold smell of the indoor ice, hot chocolate and Pac-Man in the concession area and watching my friend's evil little brother Trevor pull his dad's sweatpants down in the midst of a well-attended family circle skate. What I am saying here is, go make some real full-sensory memories with some loved ones today from 2 to 8 p.m. ($12, $8 kids).

The Siren's Song hosts an evening of folky far-left aligned political music as three Seattle bands merge with a local outfit to form a more perfect union of sound. The Window Smashing Job Creators play a folk punk blend with a touch of horns for that majestic edge while Geophasia is a similarly minded collective. The odd ducks on the touring bill would be Ghost Teeth, who have played here before and who are also steeped in the acoustic punk sound, albeit with a more hands-off approach to the serious side of lyricism. The excellent and eminently pure bluegrass and country sweethearts in Dead Bird Son will provide some of that priceless homegrown Humboldt stride with their je ne sais quoi oomph doling out some much needed down-home levity at 7 p.m. (price TBA).

It's yet another installment of the popular electro, deep bass-informed, and heavily modulated chiptune soundscape/dance escape at The Jam called Whomp Whomp Wednesday at 9:30 p.m. ($5). This week's featured artists are ChopsJunkie, Tropic Tiger, Aneurhythm and Eternalized. If those names mean anything to you then I need hardly say more. If not, then rest assured that the artists will do all of the tricks they can to make the PA go whomp.

Collin Yeo would like to remind you that cold people, especially those without homes, really value clean socks when it's chilly out. He lives in Arcata.