Killer blue-green algae blooms have returned to our rivers 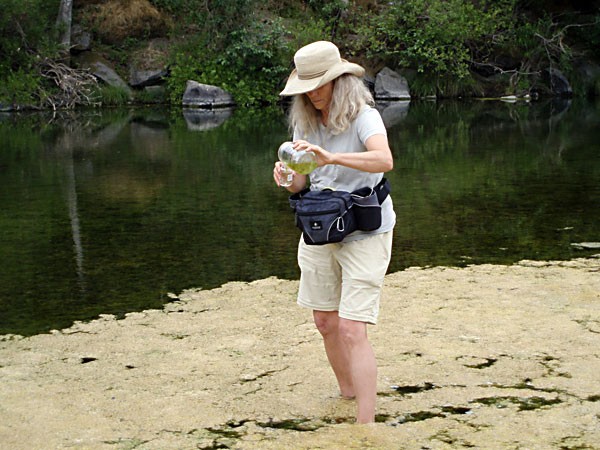 The first sign that something was wrong with Joey, the Johnston family's beloved, hyperactive Blue Heeler cross, came as they were walking back up to their campsite from the edge of the Van Duzen River. He was moving slowly, which actually wasn't all that strange considering the manic, splash-crazy swimming he'd been doing for the past two hours. But a few minutes later, when everyone had made their way back down to the water and Joey didn't jump in but just sat there, listless -- that was unusual. Joey flat-out loved the water, and at just 3 years old he usually had boundless energy. When Pete Johnston called out to his wife Jennifer to say the dog was now vomiting all over their friends' river gear, they knew Joey was in trouble.

"By the time I got there he was almost comatose," Jennifer Johnston told the Journal last week. "His tongue was hanging out in the sand. His eyes were rolled back."

They carried Joey up into the shade and set him down. He wagged his tail weakly, and they thought maybe he'd be OK. But then he went completely limp. With no cell phone reception in the Pamplin Grove campground, they quickly shoved Joey into his portable kennel in the back of their car, and Jennifer started driving northwest along curvy Highway 36. Pete stayed behind with their son, 7, and daughter, 6. Near Hydesville, Jennifer was finally able to reach the Animal Emergency Center in Eureka, and as she struggled to talk and drive at the same time, she could hear Joey's kennel rustling and shaking in the back of the car. He was having convulsive seizures.

"At Fernbridge I pulled over because I couldn't hear anything," Jennifer said. "He was already dead."

Joey, she later learned, had likely died from swallowing cyanobacteria, also known as blue-green algae. The photosynthetic bacteria can form almost anywhere, though usually in harmless single cells. In summer months, however, it can multiply rapidly in warm, shallow water, forming blooms that can produce some of the most powerful natural poisons in the world -- poisons with no known antidote. "It's a ubiquitous, very common bacteria," says Harriet Hill with Humboldt County Division of Environmental Health. "It's always there. The question is, will it bloom and produce toxins?"

Since 2001, 11 dogs have died in Humboldt and Mendocino counties after coming into contact with water containing cyanobacteria. That includes Joey, plus another dog who died just last Sunday after swimming in the South Fork Eel River near Phillipsville. Tests are underway to confirm the cause of death. Hill suggests that anyone whose dog shows signs of illness after contact with algal blooms freeze some of the dog's body fluids for analysis. (Gross but helpful, she said.)

The Johnstons had heard about blue-green algae and made a point of staying out of local rivers after Aug. 1. But they didn't realize just how dangerous cyanobacteria can be, and on this particular late-July day the slimy stuff hardly looked like a potential killer.

"You could see a little in the bottom of the river but nothing that would make you think twice," Jennifer Johnston said.

Blue-green algal blooms can form as scum, foam or floating mats -- usually in the hue advertised, though they can also look white or brown. Freshwater blooms can contain neurotoxins, which affect the nervous system (this is likely what killed Joey), hepatotoxins, which attack the liver, and other dangerous chemicals. With people, it can cause eye irritation, skin rash, vomiting, diarrhea and cold- and flu-like symptoms -- especially among children. Lake County officials this summer have received reports of skin rashes apparently caused by cyanobacteria in Clear Lake.

Local health officials have posted warnings along affected rivers and issued press releases urging people and their pets to avoid water with visible blooms. Fish, they warn, should be gutted, then rinsed in tap water before consumption. They also suggest ways to prevent the algal blooms from forming in the first place, like reducing our use of fertilizers and pesticides, making sure our septic systems don't leak and encouraging native plant growth around riverbanks and shorelines -- all of which can reduce the nutrients that help the toxic slime spawn.

Cyanobacteria aren't entirely evil. In fact, we wouldn't exist without them, and neither would dogs or plants or any of the things we tend to recognize as living. They're called the "architects of Earth's atmosphere" by the Berkeley Natural History Museum because, over billions of years, they produced the oxygen that allowed life on our planet to evolve into so many different forms. And it's not always poisonous. The Aztecs regularly ate one variety of the stuff (cyanobacterium Spirulina), and another healthful type, Aphanizomenon Flos-Aquae (AFA), grows abundantly in the Klamath River. (But so does the toxic stuff, so avoid it in its natural state.) When processed into powder or pills, AFA, which is high in protein, vitamins and essential fatty acids, is consumed as a health supplement.

But the toxic species are indeed bad news, and Jennifer Johnston wants to help other pets avoid Joey's fate. She'd read local media reports saying the blooms are a threat, but she feels the warnings should be stronger. "It's not a threat; it's a death sentence if they get it," she said.