A Farmer with Deep Roots 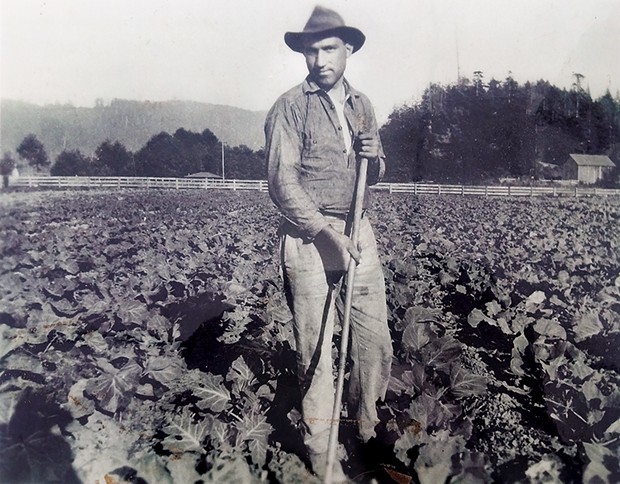 Anyone who has shopped at the Saturday Arcata Farmers Market likely knows Paul Giuntoli's face. Before he and his wife Carla scaled back from intensive production to focus on Warren Creek Farms Pumpkin Patch on Mad River Road, he sold his produce there for 31 years. Giuntoli started Warren Creek Farms in 1987, stocking the market and local stores with dry farmed potatoes, dry beans, corn, winter squash and pumpkins. The flatbed truckloads of produce Giuntoli has hauled from his fields are more than the product of a season's labor, they are the fruit of generations of farmers.

The story of Paul Giuntoli's farming in Humboldt County goes back to his grandparents, immigrants from Italy in 1919 on his dad's side and from Switzerland in 1909 on his mother's.

His Swiss grandparents Mary and Claudio Pifferini first settled in Ferndale on Grizzly Bluff Road, working on a dairy where they milked 130 cows outside without shelter and bought a dairy in the Arcata bottoms on Mad River Road in 1919. Just four years later, Claudio died in an accident while clearing brush. The bank pressured his widow to sell, saying that a woman couldn't go it alone, but she persevered and, with five kids aged between 3 months and 17, ran the dairy herself. Giuntoli's mother was the baby and her older siblings would take her with them to Canal School down the street, so their mother could work the 40-cow dairy. "She was a good dairywoman," Giuntoli says. "She knew her animals and was a good businesswoman. She had pure-bred Guernseys and won local and state fair medals."

On the Giuntoli side of things, Paul's grandpa Giovanni and his brothers operated a vegetable truck farm on Graham Road in Bayside in the '20s. Later, with the help of Giovanni, Paul's great uncle Livio ran the Giuntoli Inn, where Giuntoli Lane now sits, until 1951. Paul says "it was a famous night spot" and truly "farm to table," with chickens and produce being raised right outside.

Paul Giuntoli grew up in Arcata with an affinity for all things agricultural from a young age, participating in 4H (Arcata's chapter was the first in California) and FFA, and learning how to spade a garden from his grandpa Giuntoli, who died when he was 10. He remembers an Arcata full of gardens: "Vegetables and chickens were everywhere." He loved his grandmother's dairy and every Friday after school, he would get a ride out to spend the weekend there. "I bought my first cow when I was 9. It's what I wanted to do," he says.

After high school, Giuntoli got an ag degree from College of the Redwoods and worked for the 120-cow Lee Larson dairy in the Arcata bottoms. After five years, it turned into a partnership that lasted another 10 years while the dairy grew to 225 cows. Giuntoli remembers the windstorm of Dec. 21, 1977, when their barn collapsed leaving 500 tons of hay out in the weather. Paul says he learned a lot about how to deal with problems from his partner. "Things would be going to hell, and he would shrug it off. He had a great attitude. ... I feel very fortunate because every day was a good day; it's what you make of it." 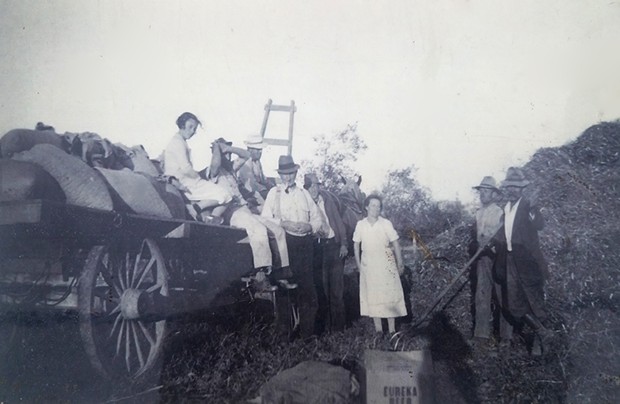 From '79 to '05, Paul and Lee Larson were also partners in ranching 7,000 acres with about 150 beef cows in Redwood Valley, keeping their own heifers and several bulls. "Things are more wild up in the hills," he says, adding he misses "being able to call the cows and spend time with them," which he did sometimes seven days a week, staying in a cabin in the winter. "I loved it up there, hated to give it up, but it all became too much going on."

At the dairy, Giuntoli grew silage corn. There was a long history of row crop vegetables and dry beans in the Arcata bottoms, and he says some 3,000 to 5,000 acres of potatoes were grown yearly in the Arcata and Eel River bottoms during the '60s and '70s. The dairy farms would rent fields to the potato growers for a year as an inexpensive way to "rejuvenate" their pastures, since the potato growers would fertilize for the potatoes and then plant new grass and clovers at season's end. It's a model Giuntoli would follow years later at Warren Creek Farms. He was also inspired by Herman Parton, who grew organic potatoes in the Arcata bottoms to ship to San Francisco wholesaler Veritable Vegetable. "I saw the possibilities," says Giuntoli.

In '85, he bought what would become his "home" place at the end of Warren Creek Road, between Arcata and Blue Lake. He planted 2 acres of potatoes and double the next year, adding squash, beans and corn. He was "working his tail off and stretched really tight," even "pounding nails" and maintaining his old equipment in his spare time. He also ran sheep at Warren Creek Farms until the vegetables took over. Giuntoli felt that going organic was "a good opportunity" and that "chemicals aren't the way to do it." He became a master at dry farming (without irrigation), which he says might yield a little less but excels in quality and ability to store. Warren Creek became the second farm in Humboldt County to register as organic and the 52nd in the state to be certified California Certified Organic Farmers.

Eventually, in 2005, the Giuntolis were able to buy his grandmother's dairy and expand their operations into the Arcata bottoms, rotating onto dairy land like he had seen others do so many years ago. "Rotation, rotation, rotation," he says, is a key to soil and farm health. Warren Creek products to local stores, especially the North Coast Co-op, to Veritable Vegetable and the Arcata Farmers Market. As a member of the North Coast Growers Association for 31 years and president for 14, Giuntoli knows his customers and other farmers well. Portia Bramble, executive director of the North Coast Growers Association, says his connection and mentorship has been of benefit to all. "He was always a phone call away with a thoughtful approach and the best advice on how to handle anything," she says. "Paul's extremely kind and caring and was always happy, rain or shine, to be talking to people at the market."

Sally Grover of the North Coast Co-op, echoes the sentiment, saying, "Paul is one of our longest time growers. He is always so collaborative, working with his neighbors and all the other farmers to ensure everyone's success. There's no ego involved." Pat Pierce, of Pierce Family Farm, says, "Paul was always our silent benefactor."

After growing up with the soil, plants and animals of Humboldt County, and putting in a lifetime of dairy, ranching and vegetable farming, Giuntoli says, "If I had to do it all over again, I'd probably do it just the same way." And that would be lucky for us.