A Fish in Every Pan

Photo by Kevin Smith Panfish: as easy to cook as it is to catch. 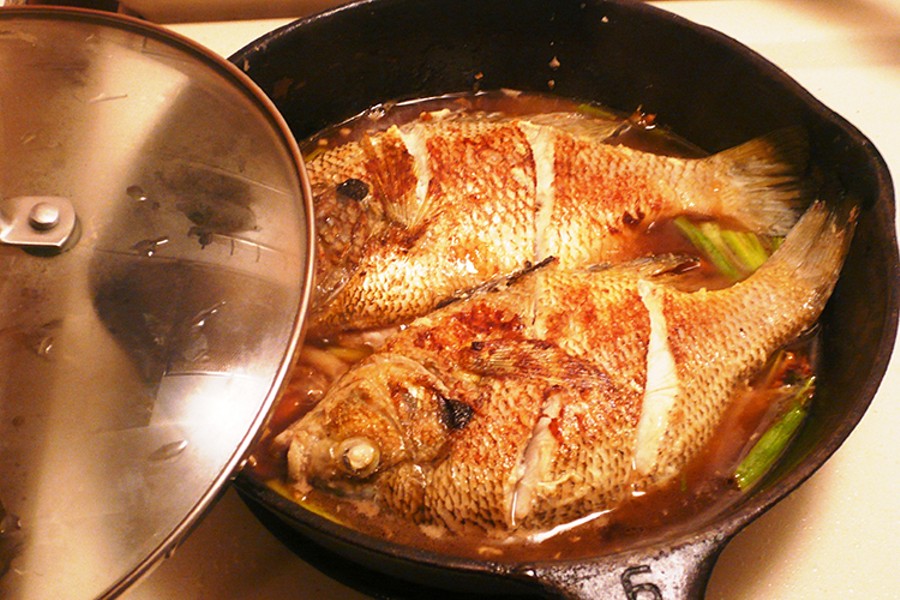 Photo by Kevin Smith Out of the lake and into the pan.

Photo by Kevin Smith Catch of the day: a tasty bluegill.

As an avid angler and spear fisherman, I am constantly looking for new ways to prepare my wild harvests. Small, easily caught and cleaned panfish (see "Panfish Fishing"), including freshwater species such as bluegill, crappie and sunfish) are best cooked whole, as they're seldom big enough to filet. Panfish are also an abundant, sustainable and often non-native species. While most anglers in the U.S. tend to cook panfish simply in butter or oil with herbs, I wanted to try something a bit different after catching a heap of bluegill the other day. My girlfriend Diane, who's Taiwanese, suggested we try a Taiwanese whole fish recipe to serve with rice and a traditional Chinese cucumber salad. I was all about it. We started looking at recipes online but soon found, as usual, we were going to take a few ideas from each recipe and develop our own in the process. And I'm glad we did, as this dish turned out to be one of my all-time favorites.

Make several vertical cuts along the sides of the fish to allow the seasonings to absorb into the meat. Sever the fish's backbone near the middle to prevent it from curling while cooking. This will keep the fish flat and allow for more even cooking. Place the fish in a dish and marinate it in the cooking wine and salt for 30 minutes to 1 hour in the refrigerator.

Beat the egg and baste the fish all over with a brush. This will allow for a more even fried skin texture and bring out a nice golden color once cooked. Now heat the oil in a pan over medium-high heat and fry the fish until it is golden on both sides (approximately 2 minutes per side). Do not worry about whether the fish is cooked through yet, as it will be simmered to finish cooking and infuse it with flavor.

Add the green onion, garlic and ginger to the oil left in the pan from frying and cook over low heat, stirring to keep from burning the garlic. After about 30 seconds to a minute, add the soy sauce, oyster sauce, brown sugar and black bean chili sauce. Stir until the sauce starts to sizzle, then add approximately 1 cup of water.

Turn the heat up to high and add the fish back to the pan. Once the sauce starts to boil, reduce the heat to medium, cover the pan with a lid and simmer for about 20 minutes, flipping the fish over halfway through so that the fish absorbs flavor evenly. If the sauce is still thinner than you'd like, remove the lid and turn the stove back up to high to reduce and thicken it.

Place the fish on a plate and drizzle the sauce all over. Finally, garnish the fish with a bit of freshly chopped green onion and slivers of fresh ginger. Serve with rice and the cucumber salad below.

First, bruise the cucumber all over by tapping it with a narrow wooden rolling pin or dowel. It is important not to destroy the cucumber in the process but you are going for a light smashing of the inside. If you are using an English cucumber, you will need to peel it. Cut the cucumber into 1-inch chunks.

Sprinkle the cucumber with the salt and toss the pieces in a bowl. This will drive out a lot of the water and allow the cucumber to absorb the flavors from the seasonings you will add to the salad later. Let the cucumber rest in the refrigerator for approximately 15 minutes.

Take the cucumber from the refrigerator and pour off the water at the bottom of the bowl. Add the garlic, sugar, soy sauce, rice vinegar and sesame oil. Mix everything thoroughly and chill the bowl again for another 10 minutes. Serve cold.