Gene "Chico" Taylor may have died in his tent down by the bay, but he was no bum 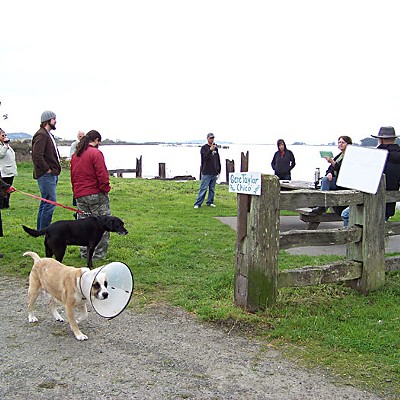 Lately he'd been reading a big Dean Koontz novel that was so good he'd urged his sister Bonnie to read it, the last time they talked on the phone. "Write it down, Bonnie!" he'd told her. Of course, he and Bonnie were always swapping good reads. They talked just about every day, Bonnie Taylor from her home in Washington state and Gene Taylor -- everybody called him Chico -- from wherever he was living at the moment. Usually in a tent, somewhere pretty and natural where the birdwatching was good and there weren't too many people around.

Chico had one of those cheapy cell phones you can get at the drug store and just add minutes to, and Bonnie made sure she kept him in minutes so they could keep in touch. It was the one concession her proud, handout-shunning, wandering younger brother made for her. Every now and then, however, she wouldn't be able to reach him. One time, a couple of months ago, a few weeks passed in which she didn't hear from him, but his phone had crapped out, that was all, and it had taken him awhile to get a new one.

Once she got through, she heard Chico's good news: He had finally landed in a spot that felt like home. "Bon, I'm 50 yards from the bay!" he told her.

It was November, and he was in Eureka.

On Jan. 9, Chico experienced his first earthquake. He called Bonnie to tell her about it.

By the morning of Feb. 14, Chico, who would have turned 50 on April 18, was dead. Bonnie, who is 51, got the call from the Humboldt County Coroner's office. His tent had caught fire while he was sleeping the night of Feb. 13, and he died from smoke inhalation. Investigators ruled out foul play. They said the fire probably was caused by a lantern. All of this was noted in brief reports in the Times-Standard.

And, for most people in Eureka who read those news reports, that might have been all we were to know -- or, let's be honest even care -- about Gene "Chico" Taylor. Just another poor transient, come and gone.

But then on Feb. 18 the T-S ran a letter to the editor from Kathy Anderson. It was a screed both personal and political. She said Gene Taylor was a friend of hers and that he wasn't camping but surviving. She also said that he loved living alone, "... where he could feed the birds and read his latest novel." She said he'd tried living in the Serenity Inn, "but found being there unacceptable, so he went off to the woods because there were no other options for him."

And why, she asked, was there not enough affordable housing or shelter for homeless people?

"Could it be that because there is no profit in housing poor people, the greed of this society keeps us from acknowledging that all human life is sacred and that we are our brother's keeper?" she wrote.

She noted, at the end of the letter, that there would be a memorial at the Del Norte Street pier.

It's tempting to accuse Anderson of using Chico's death to promote a certain agenda -- a noble one, but still an agenda. She's a co-founder of The People Project, which advocates for homeless people's rights, and lately she's been passing out flyers that allege the City of Eureka has violated the rights of homeless people for not having planned for and built affordable housing over the years and for not providing at least a campground.

But at the memorial that Anderson arranged last Friday, in the little park at the foot of Del Norte Street, a more complex story emerged. It's a little bit about a heartless society, perhaps. For instance, Anderson suspects that Chico's tent was burned down by candles that Chico used to read by -- not the lantern, because she knew it hadn't been working. If the investigators had cared enough about a homeless person's death, Anderson accuses, they might have figured that out. Either way, however, it was an accident.

But it's also about a man's choosing to live the way he wants to live.

Anderson's letter drew several people who didn't know him but were saddened by the outrage of a homeless death. Verbena, a well known local homeless advocate, noted that she'd met Gene once and that he was funny and had rosy cheeks. And pale, frail-seeming Eureka resident Charles Weeks was momentarily confused about whose memorial he was attending, thinking it was for the homeless fellow known as "Bicycle John." But he stayed. "I have compassion for the homeless," he said after the memorial. "I've been close to homeless myself."

Also in attendance was a handful of folks with a soft spot for hoboing -- the free life, the life of wandering wherever and whenever you feel like.

"Go to sleep you weary hobo, tonight you're in a warm boxcar, safe from the wind and rain," recited Mac McCormick, of Eureka, quoting some verse sung by the late hobo bard Utah Phillips. He pointed beyond the perimeter of the small park into the clump of brush and trees where Gene's tent had been: "Well, he didn't even have a boxcar." McCormick, who was wearing a gray felt hat, said he didn't know Chico but often brought small tokens to the homeless folks on the boardwalk.

Joshua Haiku, a frequenter of Poets on the Plaza in Arcata, recited some of his own verse, including this one:

live by the railroad tracks

Sit around the campfire at night

while you bark at the moon.

Haiku said he often ran into Chico on his walks along the bay, and they talked about birds and poetry and, lately, the Aleutian geese feasting and flying around before their big journey north. "And now he's gone on a big journey," he said.

Anderson read aloud the "Hobo Code of Ethics," a wholesome list of rules created in 1889 at the National Hobo Convention in St. Louis, Mo. It preaches self-sufficiency, respect for fellow humans and of nature, helpfulness, being clean and law-abiding and hard work. "Always try to find work, even if temporary, and always seek out jobs nobody wants," it says. "By doing so you not only help a business along, but insure employment should you return to that town again."

After praying, they went over to Chico's campsite and nailed a sign to a tree bearing his name and birth and death dates. Then most everyone left. McCormick, however, returned with a black plastic bag, saying, "The hobo ethic, you know." He began cleaning up: bottles, tarp, cardboard, cans, remnants of a pair of blue jeans, all burned black. It smelled like old soda, beer and charcoal.

"He did like to drink beer," said Anderson, watching McCormick work. "So he had a little beer belly."

He was about five foot nine, she added. Thinning hair covered by a Stetson. Blue eyes. "Brown leather jacket, Levis, T-shirt. Beautiful cowboy boots. So he looked like a gentlemanly cowboy. And he loved to cook and play guitar."

Anderson met Chico in early December at one of the breakfasts she serves on Tuesdays and Fridays in a lot by the Serenity Inn. In mid-December, she said, he went by bus to San Francisco to have an eye checked that doctors thought might be cancerous. He spent the night on the street to save money, and was robbed and beat up by thugs. He came home with four broken ribs, so Anderson let him stay at her house on the floor.

Chico soon returned to his tent. But he came by Anderson's every other day for a shower and to cook up a big meal for her, her son and another homeless man who slept in his truck in her driveway. Chico was a little sweet on Anderson, but she gently rebuffed him.

She'd been helping Chico get on disability. He had a bad knee and bad eye, and couldn't work yet. But he had worked all his life: cowboy, truck driver, shrimp fisherman, carpenter, handyman. She said she also was trying to help him find housing he could share with the guy sleeping in her driveway.

She also said Chico had served three and a half years in a Texas prison for harboring his father, a felon on the lam.

On the phone Monday, Chico's sister Bonnie said she and Chico and four other siblings were raised in Astoria, Ore., where the Columbia spills into the ocean. But Chico spent his teen years with his dad on the Southeast border of Texas and Mexico. He never married, never had kids, and he always seemed to live in a tent somewhere in the woods. But he never begged. "He was not flying a sign at the offramp -- never, never, never," she said.

She said Chico always came home for family events, like her wedding last year, and he'd also show up uncannily when someone needed help at home. And Bonnie and her husband visited him. She recalled one time she visited his camp in Portland, above the shipyards where he worked.

"And there were some papers on the floor of his campsite, and I see that they're checks," Bonnie recalled. "And one of them's for $900, and another one's for $750. And I go, 'Chico, why don't you rent a little apartment or something?' And he goes, 'Bonnie, I like to sleep outside.' And I'm like, 'Oh, well, who can argue with that?'"

She wonders what happened that night he died.

"Probably he had a dang candle in his tent," she said. "I'm picturing my brother's lifestyle, and knowing him he's going to sit in there and he's going to read. And he's going to fall asleep, or if he was drinking he's going to pass out and fall asleep. And then what? What happens? An arm flails, the candle knocks over, the wind puffs the edge of the tent?"

But she wants everyone to know, she said, that he was important. He had a family that loved him and accepted him.

"He's not a throwaway bum," she said.