Ocean's 8 pulls it off, Hereditary and mommy issues

OCEAN'S 8. Steven Soderbergh's Ocean's 11 (2001), itself a remake of a Rat Pack vehicle, and a franchise that's been uneven at best, isn't old enough for an all-lady spin-off to provoke rending of clothing over ruined childhoods, which is a nice change. Director Gary Ross may not have Soderbergh's pacing or the edits that make crossing a casino seem action-packed, but Ocean's 8 assembles a remarkable cast with co-captains Cate Blanchett and Sandra Bullock, and delivers the clever cons, grudges, sleight of hand, glamour, low-key humor and camaraderie you came for. More could have been made of the varied talents of its stars but Ocean's 8 adds dimension to the heist genre and is a damn good time.

Following family tradition, Debbie Ocean (Bullock), sister of the late Danny, bullshits her way to parole after a five-year stint in prison, slinks back into her evening gown and sets out to pull off the job she's been planning from her cell. With barely enough arm-twisting to wrinkle her blazer, Lou (Blanchett in aspirational Chrissy Hynde bangs), Debbie's bestie in crime who's been running a nightclub, partners up for the caper. From there the two assemble a team of familiar accomplices and new talent: Amita (Mindy Kaling), a jeweler looking to move out of her mom's; washed up Betsy Johnson-esque designer Rose (Helena Bonham Carter); fence-turned-suburban-mom Tammy (Sarah Paulson); enviably chill hacker Nine Ball (Rihanna); and pickpocket Constance (Awkwafina). Debbie unveils her plan to nick a 6-pound diamond Cartier necklace from the neck of actress Daphne Kluger (a nutty Anne Hathaway) during the Met Gala and we're off, with recon missions, blueprints and glitches, plus a little revenge subplot. This squad has goals. 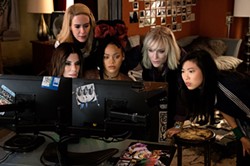 The pleasures of the heist movie are both in being in on the scam and not seeing how all the pieces fit until the end. We know they'll pull it off but there's fun in the clockwork, close calls and reveals. The genre has been almost exclusively male turf with a woman or two thrown in for motivation. As she and Lou list recruits, Debbie justifies her team of ladies: "A him gets noticed, a her gets ignored. And for once, we'd like to be ignored." Ross and co-writer Olivia Milch tap into the angles a female team offers, with much of the action taking place in spaces defined by women (or at least their images) but seldom run by them, including the Met. The large and small cons exploit Hollywood insecurities and male ego without falling into tired female character tropes.

As much as the entertainment industry sets out to create fantasies for women (mostly in the form of Nicholas Sparks adaptations), this is the first major feature that speaks to — I can't be alone here — the dream of putting on some amazing coats and stealing jewels at the world's fanciest party with your sharp-ass girlfriends. Watching the team scheme and deploy their skills (and eat all over New York) is a vicarious pleasure, and the banter and Cheshire Cat grins between Blanchett and Bullock are the stuff of true pro-mance. PG13. 110m. BROADWAY, FORTUNA, MILL CREEK.

HEREDITARY. I am hoping against hope that giving Toni Collette an Oscar for her performance in this artful, disturbing movie will complete this curse and make my nightmares stop. Members of the Academy, help a girl out.

The story opens with a bare bones obituary and a trippy transition from a dollhouse bedroom to the real thing, planting the echoing idea that the characters may not have much control over what happens to them. The dollhouse is the work of Annie (Toni Collette), an artist working in miniatures and processing the death of her formerly estranged mother, a woman she refers to in her tense eulogy as difficult and secretive. But Annie has her own isolating secrets, hiding her struggle and her visits to a support group from her husband Steve (Gabriel Byrne), who in turn shields her from the news that her mother's grave has been dug up. Their son Peter (Alex Wolff) hides the usual high school stuff but their 13-year-old daughter Charlie (Milly Shapiro, taking a stock creepy kid character next level with startling vulnerability), who's unable to connect with others, guards a strange inner life that bubbles up in disturbing drawings. Strange then tragic events bring out the family's rage at — and terror of — one another and reveal the horrors of Annie's lineage.

Collette's astounding portrayal of a woman coming unmoored is as hard to look away from as it is to watch as she peels away the protective layers of control Annie has built to deal with even the earthly miseries of parenthood and growing up amid cruelty and severe mental illness. There are Lynchian shots rendering the banal surreal and a parade of gory horrors to make Hieronymus Bosch flinch. But at the core of every brilliantly low-tech scare is the fear that we may be one another's worst fear, unwilling or unable to forgive or comfort those we have left — that love fails against anger, grief and pain. R. 127m. FORTUNA, MINOR.

THE CHINA HUSTLE. Documentary about a post-mortgage crisis Wall Street scam that will make you stuff your money in a mattress. R. 82m. MINIPLEX.

INCREDIBLES 2. The super family snaps on the spandex for a sequel. With Holly Hunter and Craig T. Nelson. R. 127m. FORTUNA, MINOR.

SUPERFLY. Trevor Jackson stars as an Atlanta coke dealer looking to leave the game in a remake of the blaxploitation classic. R. 116m.

ADRIFT. A couple (Shailene Woodley, Sam Claflin) sailing across the ocean get caught in a massive hurricane and I don't think fitting on a door together is going to save them. PG13. 96M BROADWAY.

DEADPOOL 2. Ryan Reynolds in his destined role with a better story, action and jokes. It's almost fun, kind and rough enough to make you forget it's spawn of the Marvel juggernaut. R. 113m. BROADWAY, MILL CREEK.