A Glimpse Inside Alder Bay 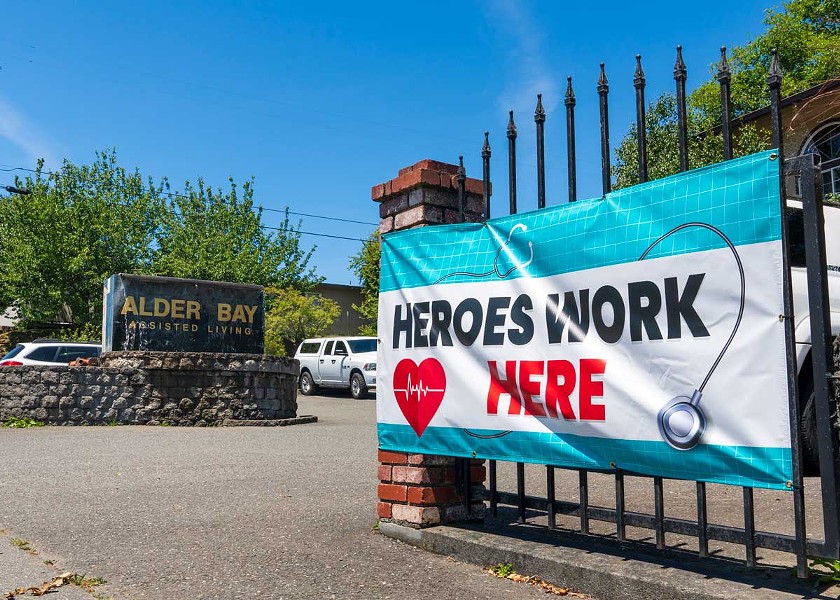 When Alder Bay Assisted Living Interim Administrator Mark Stephenson answered the facility's main phone line on May 20, the exhaustion hung heavy in his voice. Over the previous nine days, he and his staff had been working frantically to confront what every assisted living and skilled care facility in the nation fears: a COVID-19 outbreak. The numbers were mounting, with five staff members and seven residents having tested positive for the virus, and two residents having become the county's first confirmed COVID-19 deaths just days apart.

"I just haven't had time to breathe," Stephenson said, asking the Journal to give him 10 minutes before calling back on his cell phone.

COVID-19's highly contagious nature, coupled with the fact that many who contract the virus never fall ill with symptoms and a national shortage of instant-read tests, means it can tear through congregate living facilities, from jails and prisons to nursing homes and assisted living facilities. Because the disease has disproportionate impacts on people with underlying health issues and over the age of 65, it has had devastating impacts on care homes for seniors and the infirm throughout the nation.

When Stephenson picked up the Journal's second call, he explained that he felt Alder Bay was taking all the appropriate precautions. Thanks in part to its business office manager Joh-Nika Ivory having studied epidemiology and environmental health in college, Stephenson said several members of the facility's leadership team were proactive in developing protocols for cleaning, disinfecting and shuttering the facility to visitors when COVID-19 first began to spread through the United States.

"I think we were one of the first places in town to lock our doors," he said, adding he's grateful Ivory and others "pressed" in the right direction.

After 20 years in the business, Stephenson took on the job as Alder Bay's interim "traveling director," with the plan of spending 10 days at the facility and four days back home in Salt Lake City while Alder Bay looked to make a permanent hire. Then COVID-19 hit, he began sheltering in place in Eureka and everything changed.

"We were infection free for a while," he said. "Then we had our first case."

Things moved quickly from there. Stephenson said state and local public health officials have been wonderful in helping he and his staff navigate the outbreak, doing virtual walk throughs of the facility and making sure Alder Bay has enough personal protective equipment for staff. There was a problem getting washable gowns, he said, but then Arcata paddle sports apparel company Kokatat made them some.

Stephenson said some employees who worked at multiple care facilities had to stop working at Alder Bay after its first confirmed case, and the health department has put the entire staff on a modified quarantine, allowing them only to travel to and from work. Then, he said, some staff members left due to underlying conditions — like asthma or age — that made them vulnerable. Then there were some who didn't fit into a risk group but were caring for someone vulnerable at home or had young children and decided not to risk continuing work at Alder Bay. Then, of course, there are staff members who fell ill.

"And very quickly, as your care needs with your sick residents are increasing, at the same time your staffing is being depleted," he said. "That's been a real stress. Managers jumped in — our office manager, activities director, myself — we're all filling shifts on the floor, making sure we are providing resident care. That's not going unmet, it's just being accomplished at a high price in terms of our emotional, mental and physical stamina."

He paused for a moment. "You know, the residents being ill — that's the real tragedy — but as an administrator, if I were talking to other healthcare administrators, another real nightmarish part of this is what happens with your staffing."

Things are starting to look up a bit, he said, noting that the state has sent some reinforcements and a staffing agency has helped get more boots on the ground. But it's been hard, and he concedes things have moved so quickly his staff hasn't really had a chance to grieve the loss of two residents.

"There are those [staffers] who become very emotionally attached and there are some who — they're certainly caring — but it's just the work they're doing and they don't have quite the emotional connection," he said. "We've had so much to deal with on the day to day, I don't think anybody has had much time to stop and reflect on the loss of these people and the lives they lived and who they were in the way they would have under normal circumstances. ... In any crisis, it's what happens. You just kind of bear down, you become very task oriented and everything else kind of slides off to the side."

Journal attempts to contact other Alder Bay staff members were unsuccessful by deadline but some have taken to social media to express frustration.

"To all the fuck ass dipshits who don't take this virus seriously, who cry every day about shelter in place and physical distancing and wearing a mask ... how about a big FUCK YOU!" one wrote on Facebook recently. "I feel like I'm walking into a fucking gas chamber every day to take care of these people, our elders, our grandparents, while you are all bitching about being safe in your home."

About a week later, after the deaths, the staffer posted again, expressing how hard it's been to see commenters on social media and news sites critical of Alder Bay's care when they don't know anything about what the facility is doing to protect staff and residents.

"I can't speak for every staff member but for me, I tried so hard to save them," the post states. "Disinfected constantly throughout my shifts from the moment COVID-19 was said to be in the United States ... way before [shelter in place]. ... I have worked at Alder Bay for 16 years. The residents are not my patients or clients they are my friends and family. So people questioning the procedures and conduct of staff in preparation and handling of this virus need to ask the questions and not presume they know. You do not know, and it's salt in the wound to blame the people who did their best. All I have been through in that building over these years has always come down to me loving my people and doing everything I can for them. This time I can't save them and it's wearing down on my [heart] and soul."

In interviews with the Journal, family members of Ida Newell, an Alder Bay resident who become the first person in Humboldt County to die of COVID-19, were universal in their praise of Alder Bay.

"That place is a blessing," said Catherine Fanucchi, Newell's sister-in-law, emotion evident in her voice. "It's beautiful. They take such good care of people."

In the May 20 conversation, the Journal asked Stephenson whether he feared for his safety working in the facility.

"I personally don't," he answered quickly. "I'm in a situation, my wife passed six years ago. My kids are all grown and independent. I'm very much on my own and I just kind of have a view of life that there are greater powers than me that control these things and I'm perfectly comfortable with whatever destiny or outcome comes next. I certainly don't want to become ill, but for me personally — unlike other staff who have family or kids to think about and make decisions based on that — I feel I'm pretty free and clear to do what needs to be done and not think about it too much. Death doesn't scare me at all."

On May 25, the Journal called to follow up with Stephenson. Two days earlier, Public Health had confirmed two additional Alder Bay staff members had the virus. Stephenson said he was among them, that he is now COVID positive and quarantining at home. He said he hasn't suffered any symptoms.

"I had felt really, really tired Thursday but assumed it was just because we've all been working day and night," he said, adding his voice has been a "slight bit gravely."

All things considered, though, he said the timing isn't bad. Staffing reinforcements, as well as a new administrator — Ridgeline Management Co. Regional Director of Operations Matthew Glencoe — had arrived Friday, he said, so there shouldn't be any disruption in care for Alder Bay residents.