A History of American Cuisine, Part I

And a simple cornbread recipe 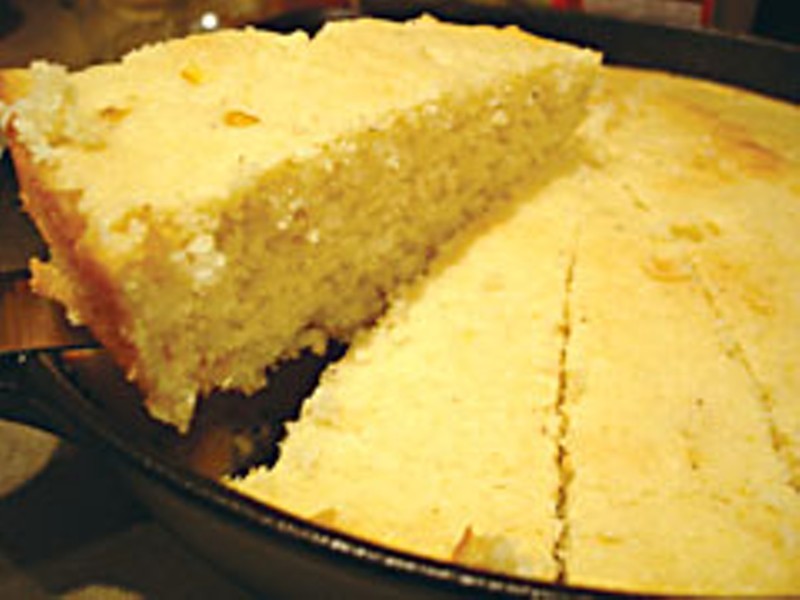 "There is no ‘American cuisine'?" inquired Nero Wolfe. "Have you eaten Maryland terrapin stewed with butter
and chicken broth and Bourbon?"

"Have you eaten a planked porterhouse steak, two inches thick, charred on the outside, but surrendering hot > red juice under the knife, escorted by thick slices of fresh King Bolete mushrooms faintly underdone?"*

"Or paper-thin sliced Smithfield ham, baked with vinegar, molasses, cider and spices? Or Kentucky Burgoo,
with chicken, mutton and squirrel sausage? Or Lobster Newburgh? Or Key Islands She-Crab Soup? Or the
Creole Tripe of New Orleans? No? I have eaten ‘Tripe a la mode de Caen' at Le Trumilou in Paris. It is superb,
but no more than Creole Tripe. I have eaten bouillabaisse at Marseilles, its cradle and its temple, yet it is mere
belly-fodder compared with its namesake in New Orleans, with Atlantic red snapper, Gulf oysters, and
bayou crayfish...."

adapted from Rex Stout's novel, Too Many Cooks

The late 17th and early 18th century produced the modern intellectual concepts we call the Enlightenment, notably in political theory, mathematics, science and theology. Toward the end of that era, the British colonies that were to become the United States began to be a laboratory for these ideas: for the practical application of science (Benjamin Franklin), medicine (Benjamin Rush), politics (Thomas Paine); for the simultaneous and contradictory appearance of "Deism" (the socially-acceptable agnosticism as practiced by Washington, Jefferson, Franklin and other Founding Fathers) and the "Great Awakening" (the origin of evangelical Christianity); and for bold social experiments like the Shakers.

The colonies were also a first in the culture of food. Unlike societies where cuisine was primarily a product of native horticulture and husbandry (cassava, yams and goat in sub-Saharan Africa; oats, barley and mutton in Scotland; legumes, corn and dog in Central America), the colonies imported grains and beans, fruit trees and berries, sugar cane and beets, honeybees, chickens and dairy and meat animals.

These they supplemented with local foods like chestnuts, corn, game and eels, and ultimately Latin America's cornucopia (potatoes, tomatoes, sweet potatoes, peppers, peanuts). By the turn of the 19th century — a generation before Darwin — farmers were genetically modifying on a large scale, selectively breeding plants and animals to flourish in the Ohio Valley, a verdant watershed encompassing 14 states, with the richest soil yet known to agriculture.

Thus, the nation became a flourishing source of agricultural wealth long before industrial raw materials such as cotton, coal and iron were viable exports.

The fact that there was no single state, but a group of independent royal English charters, allowed diversity in diet from the start. A mid-day dinner in rural Pennsylvania would be very different from that on a Carolina plantation, or from street food in The Bowery.

To the initial presence of British, Dutch, French and Spanish food, successive waves of immigration added culinary influences from Germany, Ireland, Scandinavia and Italy. Meanwhile, the underground but pervasive influence of slavery played its role in the South. Following the annexation of Texas, Mexican border states developed their own regional cuisine. Jews brought Baltic and Slavic influences to the urban Northeast, and coolie laborers in California added Chinese. By the early years of the 20th century, the United States was repository to a staggering legacy of foods.

But that legacy was not a literal one. The differences that evolved over time and distance were substantial. There were also critical differences in ingredients, preparation, and indeed, differences of life and culture. There is no such thing as "chop suey" in China, "chili" in Mexico or "french fries" in France, and a Chicago-style deep-dish pizza would be considered an embarrassment in Naples. American food forged a unique path, ignoring the entreaties and scoffs of purists, collecting — like a magpie — shiny bits of metal and pieces of string, seemingly random things. But in the end, it is not random. It is a kind of genius. It is its own thing.

Today I want to begin a series of journeys through America's culinary past. It would be interesting (and often amusing) to share early recipes, or "receipts" as they were called. But instead I want to select useful ones, ones I've actually tested. Obsessing about the past is as bad as ignoring it.

My first subject is cornbread. There are not many dishes the New World can claim sole credit for, but this is one. Native Americans learned early to dry and grind corn into corn meal, the basic component of cornbread. The first cornbreads were simple mixtures of cornmeal, salt and water. Cornbread is unique because instead of yeast or other leavening agents, it is caused to rise chemically. This is due to natural properties of cornmeal and corn flour.

> The best corn bread we ever ate was from meal well-kneaded, with nothing but water and a little salt, and then made into lumps about the size and somewhat the shape of a man's foot, and raked in the embers just like potatoes to roast, and there allowed to remain and cook all night. Remember the three grand secrets about baking good corn bread: Never grind your meal very thin, always have it fresh-ground, and never fear baking it too much.


Thin, dense and flat, corncakes were the perfect way to transport healthy food for long distances over periods of time with minimal weight. Together with jerked venison and pemmican, "pone" became a staple of the pioneers. Along the way, some brilliant woman made a critical improvement, the addition of egg, and that is its tradition.

Cornbread was the natural fodder for a nation of constantly shifting demographics, of poor whites and blacks seeking a better life. Disdaining charity and handouts, the seekers made do with what they had. In this ongoing American quest for independence, cornbread played its role — the most democratic of foods.

In his book Serious Pig, John Thorne describes grinding his own meal from kernels: "They looked like tiny glass beads, and they ground up something like that, too. To turn them into meal was an arm-wrenching experience. The mill was bolted down to the kitchen counter, which, underneath its linoleum veneer, was an inch-thick piece of plywood. Even so, I was sure that I was going to rip a chunk right out of it before I was done. Enough cornmeal for one small cornbread was a half hour's grinding." Ever wonder what basic food preparation was like when you did it all yourself, from scratch?

Thorne continues: "But it was lovely, fragrant stuff, and the resulting cornbread was delicious, possessing tiny flavor notes that are long gone by the time cornmeal arrives from the mill."

The modern take on cornbread is about additions and improvements, and I'm as guilty as anyone — I've made it with layers of cheddar cheese or chili in the middle, or shredded pepper jack on top, with jalapenos, with garlic, with honey, and with corn freshly sheared from the cob. Ideally, however, cornbread should taste like corn, and nothing else.

Three of my most trusted sources claim that white cornmeal has more flavor. But where can you buy it? I searched Eureka Natural Foods, the Co-op and Wildberries. In fact, where I found it was Safeway in Arcata, in two-pound boxes used mostly for tortilla making by the Latino community.

Note in the recipe the absence of "Clabber Girl" or other baking powder. The use of aluminum sulfate in baking powder introduces a "metallic" off-flavor, so soda and tartar are used instead to boost leavening. Still, this is not a puffy cake.

Put a well-oiled* 8-inch cast-iron skillet in a 450-degree oven for 5 minutes.


>> Whisk the egg, adding liquid, then pour the dry ingredients through a strainer to remove lumps, and whisk again.
>> When the pan is ready, remove — hot! — pour batter in, then bake for 15-20 minutes. Bread should be set and golden brown when done.
>> Remove from oven, and invert over a cutting board (otherwise it will continue to cook and become dry). Allow to cool 1-2 minutes before slicing. Serve hot, with butter.

This was the simplest recipe I've ever encountered. I was skeptical.

But omigod. I'm now a devout believer. It was the best cornbread I've ever tasted, so good we ignored most of the meal, cutting off and buttering little wedges until we felt like Thanksgiving turkeys ready for the oven. (We were also testing Organic Valley "cultured butter," which is the perfect accompaniment.) Simpler is not just better; it is heaven.