A is for Apple

... and here's a mele galette with Italian flair 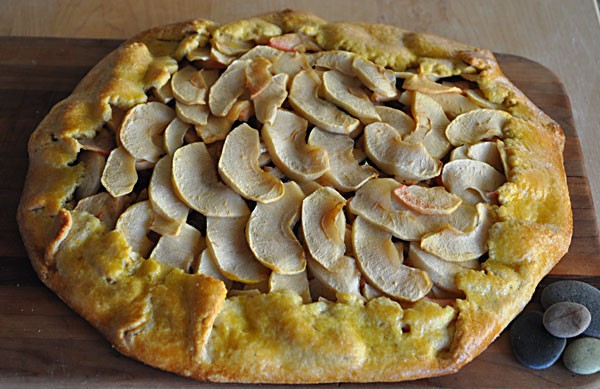 No fruit is more to our English taste than the Apple. Let the Frenchman have his Pear, the Italian his Fig, the Jamaican may retain his farinaceous Banana, and the Malay his Durian, but for us the Apple.

In The Anatomy of Dessert, nurseryman and pomologist Edward Bunyard devotes a chapter to each fruit, from Apple to Strawberry, describing, "in seasonal order, its notable varieties, imparting to each a distinctive personality" (David Karp, Preface to the 2006 edition). Although figs are probably this Italian's favorite fruit, I love apples, and every year I welcome the new crop, a needed consolation for the inexorable shortening of days. I agree with Bunyard when he says: "There is in the Apple a vast range of flavours and textures, and for those who adventure in the realm of taste, a field for much hopeful voyaging."

My usual breakfast is an apple, and for proper enjoyment I must hold it in my hand and bite into it. I chew slowly and concentrate on its flavor and texture. I like shopping for apples, especially our local ones, and I am always eager to try apple varieties to evaluate whether they are suitable for my breakfast and/or as an ingredient in baked desserts or in creative combinations (for example, with blackberries or plums in preserves).

I believe that it was thanks to Grandma Duck (Donald Duck's grandmother) that, in my early years, I was introduced to the image of apple pie. I occasionally had torta di mele, a cake that is topped with and/or includes sliced apples (depending on the variation), but I wanted to taste a pie, two crusts enveloping a filling of apples. My desire was fulfilled during my first stay in England: My landlady regularly baked apple pie, and rhubarb pie as well. I loved both pies and the evening ritual that included them: I had a slice before going to sleep, together with a cup of tea. In recent years, I have appreciated a new torta di mele, and to my repertoire of desserts I have added rocciata, an apple-filled dessert from my region of origin (see "Table Talk," March 3, 2008) -- and now, apple galette.

I arrived at apple galette by following an idea that started with apples and crostata (tart). For a person like me, who has substantial problems in making food look pretty, galettes are very attractive, due to their free form. My galette combines a base layer of pasta frolla from my crostata, and a filling similar to that of rocciata, a combination that, I believe, works nicely.

I have previously described the origin and details of the recipe for pasta frolla pastry recipe that I employ. (See "Table Talk," August 28, 2008.) Prepare the pastry dough in advance, wrap it in plastic and refrigerate it until needed. Set aside some of the beaten eggs from the dough (about a teaspoon) for final glazing on the tart. When you are ready to make the galette, pour slightly warm water over half a cup of raisins (I like to use a combination of Thompson, flame and golden raisins) and let them steep until needed. Finely chop a third of a cup of walnuts and set them aside. (I lightly toast the walnuts before chopping them.)

Core, peel and quarter 2 pounds of apples and divide between two bowls. The apples that will become the top layer of the galette should be cut into lengthwise slices 1/8 to 1/4 inch thick, then tossed with a teaspoon of lemon juice and a teaspoon of sugar. Cut the rest of the apple quarters in half lengthwise, and slice the pieces crosswise (1/8-inch thick). Toss those with lemon juice and ground cinnamon and add the drained, plumped raisins. Set aside.

Now for the crust. Preheat the oven to 350 degrees F. Take the dough out of the fridge and place it on a floured piece of parchment paper, then roll it into a thin 14-inch round. Lightly dust the surface of the dough with flour as necessary to prevent the rolling pin from sticking. As you roll it, the dough will develop a ragged edge (later, this will become decorative). Place the parchment paper with the dough on it on a rimless cookie sheet, or use the back of a baking sheet, so that you can easily slide the galette off after baking. (It is fine if the dough goes slightly over the edge of the sheet, as later it will be folded over.)

Add the chopped walnuts to the apples and raisins and toss. Spread the mixture evenly over the dough, leaving a 2 1/2 inch border all around. Distribute the remaining sliced apples on top in layered circles. Fold the uncovered border of dough over the apples, making pleats as needed as you go all around the galette. Make sure there are no tears in the folded dough. Add a few drops of water to the leftover beaten eggs, blend and then lightly spread over the folded dough using a pastry brush.

Bake the galette for 30 minutes, then loosely cover with foil and bake for another 20 minutes. Remove the foil and bake a few more minutes, until the crust is a nice golden color.

I will end on a totally different note: For an article I am planning to write, I would appreciate notes from readers who have tried to make cheese (of any kind) at home. Contact me via e-mail at simosite@mac.com. I hope you will be willing to answer a few questions regarding your experience.

grated zest of half lemon

Pulverize sugar in food processor; add flour (both kinds) and pulse to mix.

Add butter, lemon zest and salt, and pulse until mixture has consistency of coarse crumbs.

Mound mixture on work surface, make a well in center and pour in beaten eggs.

Combine using fork, then your hands, working dough as little as possible.

Shape dough into a thick disk, wrap in plastic and chill thoroughly (up to overnight).

Toss with lemon juice and sugar.

Toss with lemon juice and cinnamon and add soaked raisins.

Roll out chilled dough on parchment paper into a 14-inch round.

Place parchment paper and dough on a rimless cookie sheet.

Add chopped walnuts to apple, raisin mixture and spread evenly over dough, leaving a 2 1/2-inch border all around.

Distribute remaining sliced apples in layers on top of mixture in decorative pattern.

Bake galette 30 minutes, then loosely cover with foil and bake for another 20 minutes.