A Joke Walks into a Bar 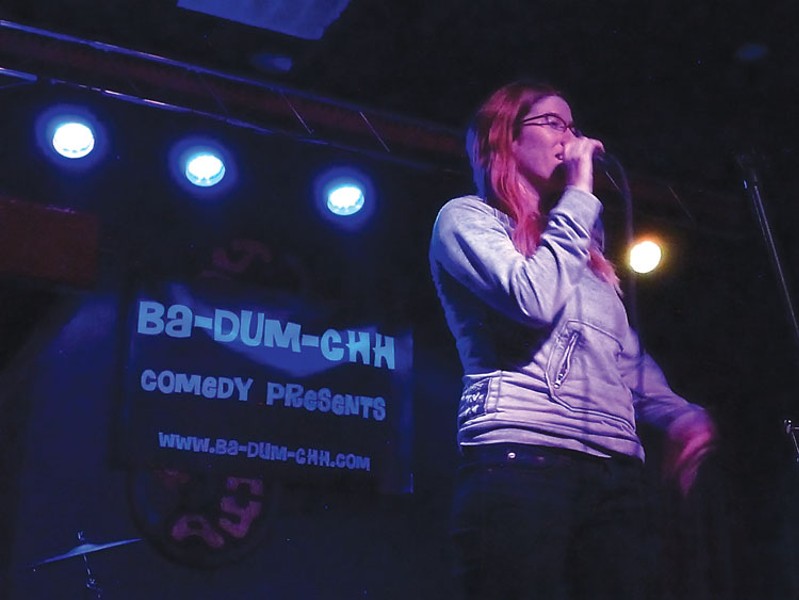 photo by Ryan Burns “L-Dub” got topical: Q: “How many CEOs of multinational corporations does it take to screw in a light bulb?” A: “All of ’em: One to hold the light bulb and the rest to screw the entire world.”

Stand-up comedy must take some serious nerve. I say "must" because I'm far too chickenshit to test this hypothesis. But for anyone with even a shred of self-doubt, stand-up must rival stripping as the scariest thing you can do onstage. With a few exceptions (most of ‘em god-awful), comedians have no instrument to hide behind, no song structure to lean against and no colleagues to blame when they bomb. It's public speaking -- which routinely ranks among society's worst phobias -- in front of an often drunk, sometimes hostile audience with very high expectations: Make me laugh, clown.

Fortunately for the brave performers at last month's open mic comedy night at the Jambalaya in Arcata, the audience was in a generous mood -- probably because half of them were awaiting their turn onstage. Hosted by the local Ba-Dum-Chh comedy troupe, the event cost three bucks at the door, unless you signed up to perform, which got you in free.

Emcee Joe Deschaine took the stage first to introduce the Ba-Dum-Chh band, which consisted of a guitarist and a drummer. "We've changed our name," the guitarist hollered to Deschaine. "We're now called ‘Let 'Em Talk.'" And with that, the evening's first joke had been deployed. Deschaine explained that each performer would have five minutes. "If you're killing it, look over and I'll give you the thumbs up to keep goin'," he said. "Otherwise I'll have my stopwatch over here."

The first aspiring joke merchant was a tall man in a Led Zeppelin shirt who called himself Gecko. "I didn't know this had to be five minutes," Gecko said uncertainly. "I've only got a couple jokes. I do know one thing: I know how every single racist joke that I've ever seen starts." He paused. Was he waiting for laughter? Let's see. He's a black man. And he'd walked into the Jambalaya ... a bar. Riiight. Nervous laughter rippled across the room. Gecko soldiered on.

"You do know the difference between a gutter-punk chick and a piece of pizza, right?" The crowd braced for impact. "You don't have to turn the pizza around and peel the crust off before you eat it." Groans mixed with (polite?) laughter. The drummer crashed his cymbal. Someone in the back groused, "Oh, maaaaan."

From there Gecko launched into his "how many [fill in the blanks] does it take to screw in a lightbulb" material. After his set, in a commendable display of charity, the crowd applauded, and Deschaine took back the mic. "Thank you, Gecko. Thank you for saving me money on my car insurance, man."

The next performer dumped out more canned jokes, and "canned" really is the correct term, here. Would-be punchlines landed with the splat of wet refried beans in a plastic bowl. The night started to feel ominous.

But then, heroically, the third performer took the stage. Eva Jade, a wholesome-looking girl in a blouse and jeans, launched into an actual routine of original material. She'd recently returned from visiting family in Germany, her story began. "I like the metric system," she continued. "It's a lot nicer to say ‘I came back with three kilos' than ‘I gained eight pounds.'" The crowd's laughter was honest, buoyed by relief. Jade settled into a rhythm, smoothly transitioning from one joke to another, getting laughs as she talked about her method of birth control and compared her period to female rappers with "heavy flow."

The next few acts were a mixed bag, but by now everyone was having fun. Bad jokes were allowed to pass by; mediocre ones were treated as hilarious. A woman in a flat-brimmed cap relayed the handful of dirty jokes she'd memorized then wrapped up with, "Thanks for not charging me a fuckin' cover fee." A broad-shouldered man paced the stage as he mused on the word "cocksucker." Why do guys use it as a negative when it's what most of ‘em want at the end of the night? They should spin it, he reasoned. "It wouldn't be too hard: ‘That was a cocksuckin' sunset.'"

About an hour in, a bearded man stepped onstage with a guitar. People thought maybe he had a musical comedy act, but in fact he'd just arrived and didn't realize the open mic was for stand-up only. He launched into a plaintive guitar melody that steadily built to a shout-sung crescendo complete with falsetto la-AAAHs.

Named Brent Walsh, he's the lead singer of a San Francisco band called I the Mighty. In an online review of its latest EP, Alternative Press called its music "cinematic emo-metal" and commended Walsh's "lithe, impassioned tenor." But he was unknown at the Jam, and his pained emoting was completely out of place. His performance, depending on your sense of humor, was either brutally awkward or one of the funniest things all night.

Either way, his act wrapped up the open mic portion of the night. Next, the members of the Ba-Dum-Chh troupe performed their own material. The first guy, "Ratty Matty," gave Walsh a good-natured hard time. "Now everyone's upset and focused," he joked. "Can I bring you on the road with me?"

The next, Joe Wasetis, proved to be the worst performer of the evening -- a one-man comedic vortex from which no humor could escape. Though the moment had long passed, he, too, went after the musician. "Was it Brett? Brent?"

"Yeah, man," Walsh called back from the round table where he sat with his friends.

"Once I thought this was a comedy show." Dead silence. Wasetis moved on. "I order my coffee like how I would like my women: tall, skinny, non-fat, extra hot, extra whipped cream." More silence. Pointed and intentional. Crickets would have been shushed. When Wasetis started talking about ways telemarketers mispronounce his last name, portions of the crowd gave up and launched into their own conversations at full volume.

Wasetis appeared oblivious. "Have you guys heard this new ad on the radio?" he asked. "It's about teaching the homeless how to use the Internet. Why do the homeless need to use the Internet? Do they need to check their balance at the food bank?" From a table near the bar's south-facing wall came the first full-throated "boo" of the evening. A woman called up to the stage, saying she used to be homeless and didn't like that joke.

"I really don't care; I'm still gonna continue on," Joe said flatly. "So, they're on Twitter now, too -- as if they didn't have enough voices in their head already."

From the audience, a man called out, "I thought this was a comedy show!" It was Walsh, the musician, turning Joe's own line against him. The crowd roared with laughter. It was hands-down the best zinger of the night.