Call it cenci, call it crostoli, either way frappe is bugie. 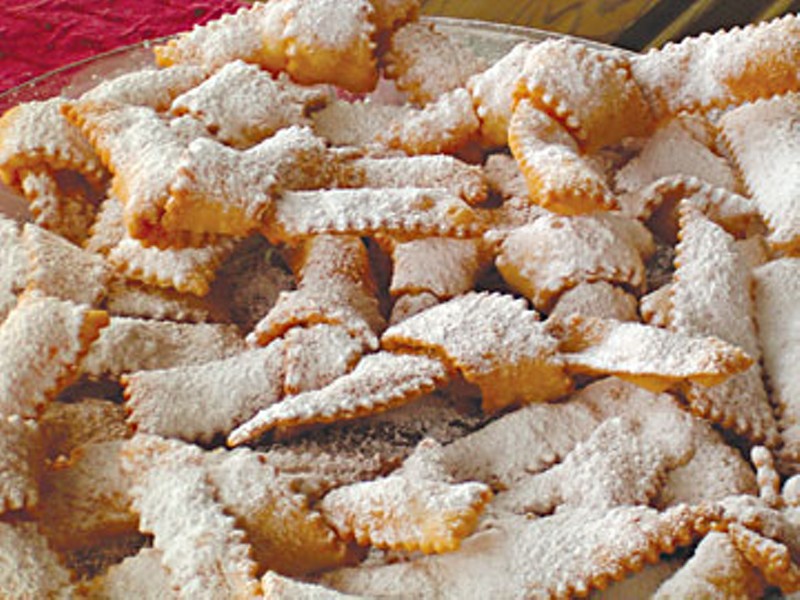 I immediately recognize myself in the little girl dressed as Snow White. I also identify my best friend, in an elegant kimono. I can actually recognize all our costumed classmates. A bit to my surprise, their first names and almost all of their last names travel effortlessly from a remote corner of my memory to my mouth, and I pull them out, one after the other, as if from a magician's hat. The photo was taken most probably when we were in second grade, on the last day of Carnival, Carnevale or martedì grasso in Italian, when we had a party instead of lessons.

Carnevale is the period that precedes Lent (Quaresima). Although it starts on the day of the Epiphany, traditionally celebrations have been most lively between the last Thursday before Lent (giovedì grasso) and Shrove Tuesday, known here as Mardi Gras. In Milan and the areas that follow the Ambrosian Rite, Carnival lasts four days longer, until Saturday. There is no Ash Wednesday, and Lent begins on the following Sunday.

There are different interpretations of the etymology of the word. The one that has most support makes Carnevale derive from a Late Latin expression meaning to take away meat (from the table), something that, in accordance with Catholic precept, occurred at the beginning of Lent. Historically, meat was not the only food item banished during Lent, but in time the dietary restrictions were relaxed. When I was growing up, my family refrained from meat on Fridays year round.

As a child, I looked forward to the advent of Carnival not only because I would wear a costume at parties, but also because I would eat the traditional pastries that my mother and my friends' mothers made, in particular frappe, which I will describe below, and others that I am saving for future articles.

Some Carnival pastries belong to the tradition of a specific area, while the one I am talking about is found throughout Italy, made in slightly different ways and referred to using different names. What I grew up calling frappe I learned to call chiacchiere when I lived in Milan. They are also called cenci, bugie, sfrappole, crostoli, lattughe, to name but a few regional variations. Some of the names originally refer to other things. Frappe are fringes and cenci, rags. Chiacchiere means chats or gossips. Bugie means lies. Lattughe are lettuces. The Carnival pastry versions of all these items are pieces of rolled dough deep fried and dusted with powdered sugar. Different incarnations of the basic idea are cut and shaped differently before being fried. There are also slight variations in the list of ingredients, but this is true also within the realm of one denomination. In fact, given the popularity of these pastries, every family tends to have its own recipe. My version is based on my mother's recipe.

My mother used a pastry cutter with fluted wheel to cut the rolled dough, a tool whose other employment was as ravioli cutter. If I was around when my mother made frappe, I would plead to be allowed to help with cutting and knotting. I was then granted a piece of the dough and entrusted with the cutter. I loved rolling it: I can still hear the slightly squeaky sound it made. The dough is quite resistant and lets itself be shaped into a simple, loose knot. After it is fried, cooled and dusted with powdered sugar, the knot that was fun to tie is just as fun to eat. Fragments of frappe and specks of powdered sugar have a tendency to become airborne. The recommended antidote is a strategically-placed plate or napkin.

Consider yourself warned:Frappe induce chain eating. Baking the frappe is an option. Clearly, fried frappe have all the flavor advantages of fried food. However, baked frappe are quite good and you may choose to use each cooking method on a portion of the dough and get a taste of both worlds.

The recipe I am about to present yields enough frappe to fill a platter that will attract everybody's attention when placed on the table. To start, take out from the fridge, well in advance, four tablespoons of unsalted butter. When softened, cream the butter in a small bowl. Place two cups and two tablespoons of regular, unbleached flour on your kneading board and make a well in the center. Break in it two extra-large eggs. Using a fork, mix the eggs with the surrounding flour until the mixture is no longer runny. Add the creamed butter, a pinch of salt and two tablespoons of granulated sugar. Using the tip of your fingers, mix all the ingredients, then involve the rest of your hands and knead the dough thoroughly. If the dough is sticky, add a tablespoon or so of flour. Shape the dough into a ball, cover it with a cloth, and let it rest in a cool, dry place for about an hour.

Depending on the size of your kneading board, you may want to cut the dough in half before rolling it. Sprinkle flour as needed to prevent the dough from sticking to the kneading board or to the rolling pin. Roll the dough into a rectangle with a thickness of 2-3 millimeters (1/8" or slightly less). Using the pastry cutter, cut strips of dough. I like to cut shorter strips (1-1.5" x 4-5") along the periphery, where one side is a bit rounded. I leave these pieces flat. Then I cut longer strips one inch wide and about nine inches long and shape each one into a knot. The dough is pretty resilient, so don't be afraid of gently pulling the ends to make the knot (which should be lose). A third option I use is to cut wider strips, 2" x 4" and then make a partial cut in the middle, along the longer side. The two flat options are recommended for the frappe you choose to bake.

For the fried version, heat oil in a deep skillet that can withstand high temperature. To check the temperature of the oil, I use my mother's method of placing a morsel of bread in it and see it sizzle. Have the frappe already cut (and knotted, when applicable). Drop the frappe in the hot oil and watch as bubbles form in the dough. I recommend frying only a few frappe at a time, as they require space to be turned over comfortably and also to keep the temperature of the oil constant. Turn over the frappe with the help of a slotted turner. They are ready when golden in color. Place the drained, hot frappe on a plate lined with absorbent paper and let them cool.

For the baked version, preheat the oven to 350 F and line a cookie sheet with parchment paper. Place the flat frappeover the sheet and bake for 10-12 minutes. Watch them carefully as they can easily burn. Take the cookie sheet out of the oven and let the frappe rest for a few minutes, as they will keep cooking.

Regardless of the cooking method, place the frappe on a platter, sprinkle them generously with powdered sugar and enjoy a little sweet and crispy Carnival feast (no costume required).