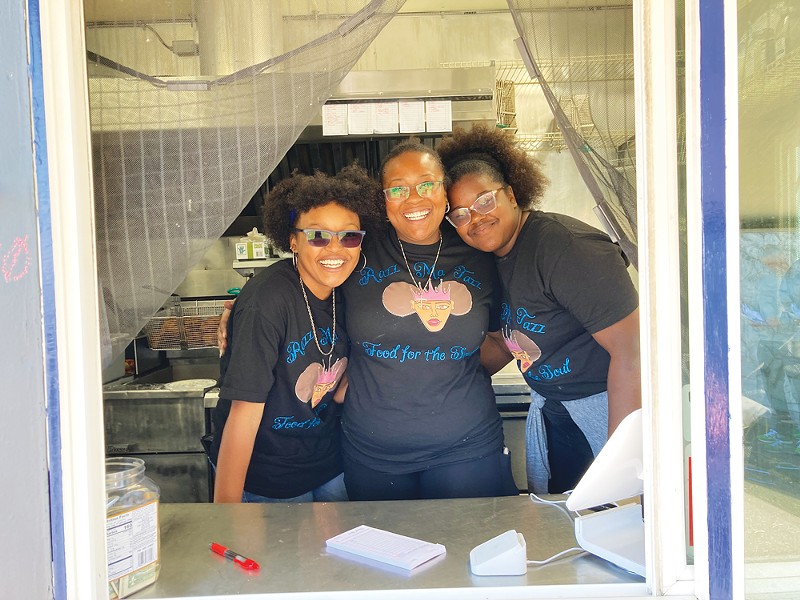 Photo by Jennifer Fumiko Cahill A smothered chicken leg with some fried okra.

Photo by Jennifer Fumiko Cahill Customers line up at the Razz-Ma-Tazz truck on Broadway in Eureka.

On Juneteenth, the silver Razz-Ma-Tazz Soul Food truck sits parked between the Southside Mike's BBQ and Taste of Bim trucks with a small crowd in front and a handful of young people running orders to patient customers. The fryer was down and the crew had to cook some 200 pieces of marinated and coated chicken in a pan on the truck's stovetop. When it was all over, owner LaToya Fields says she "ugly cried" in gratitude. "It worked, we're OK and, oh my God, this is happening."

A year ago, after chatting about starting a mobile business, a friend shared a Craigslist ad for a truck with Fields, who'd been cooking and selling plates from home on and off. She says she was the only one who showed up with a vehicle that could haul it away and so became the proud owner of the former Simmer Down trailer. After she and her family sanded off the yellow paint, painted on a logo her daughter Taziyah Harris drew — a queen with Afro-puffs — and got vinyl lettering from another friend, it was reborn as the Razz-Ma-Tazz soul food truck.

Fields is used to cooking for a crowd, a skill she learned from her mother growing up in Compton. "My mom has always been an amazing cook and she did foster care for a while ... so it was just a mass cooking situation." To feed Fields and her brother, along with four or five other children, her mother would cook in batches and make up plates they could grab from the fridge. "I was always in a kitchen," either helping at home or hanging around at the restaurant/bar her mom was managing, she says.

When Fields moved to Humboldt in 2014 to attend Humboldt State University, she didn't have a job so started selling food to get by, offering $10 plates to her daughter Taziyah's teachers and on a Facebook page. Even after finding a regular job, she kept it up on the side here and there.

"My graduation cap said 'Compton Built, Humboldt Strong,'" she says. "Humboldt made me put on my big girl panties and figure things out."

That included some of her grandmother's recipes for traditional African American soul food — all of which say, "season to taste" — with the help of her mother. "My grandmother is from Mississippi and my dad is from Chicago, and it's just in the seasoning. ... When she would make sweet potato pie, we would fight over who gets how much." That pie, like Fields' peppery black eyed peas, has to sit overnight to "settle" to taste as it does in her memory. Like her grandmother, she's not eager to document exact measurements for everything. "I have to smell — I stand over the pot of greens and I season, and I just know."

Fields wasn't alone missing the stewed oxtails, collard greens, macaroni and cheese, fried chicken and cornbread she grew up eating. What didn't fit in her freezer after feeding her family went to appreciative friends. And eventually her Facebook page had some 300 followers. She took orders, cooked, made up plates and drove around with deliveries. And like Fields, her daughter learned those recipes by helping in the kitchen.

"She made the waffles while I made the chicken," Fields says. "That's my little broke best friend. She rocks with me on all my crazy ideas."

Now set up with a spot for the truck at 1411 Broadway at the corner of 14th Street in Eureka, a food handling license, commercial kitchen at Redwood Acres and help from friends and family, including boyfriend Staci Fowler, a Chicago-based caterer, Fields is determined to build the business for Taziyah. "This is for her to have something." She says she told her teenage daughter, who's taking culinary classes through her school, "If you want to travel and when you go to college, this business will help you pay for that."

Taziyah and her sister Caci Fowler staff the truck with three other teens, who are all "full employees." Fields says, "I'm hoping it's sustainable, the kids are excited." After figuring the cost of re-upping her food supply, she split the Juneteenth profits with the kids. "I want them to feel appreciated, to feel that their hard work is not for nothing. ... They're not privileged kids. ... I don't want them to feel taken advantage of." After being on her feet all day, one of the teens, Fields says, proudly told her it was the first time she's ever bought herself shoes.

Fields is trying to keep the cost of menu items low. So long as it's sustainable, a hefty chicken thigh smothered in gravy is $2.75, a fried pork chop is $4.50, a shareable helping of meatless greens is $3.75 and the peach cobbler that sold out early on Juneteenth is $3.75. In a food truck market seeing upscale menus and prices of late, it's eyebrow raising, but she has her reasons. "I know what it's like to be a struggling parent and your bills are already killing you and needing good food and wanting good food," she says. "I want to survive and I want to be successful, but not at the expense of not letting people eat good food."