A Men's Guide to Surviving a Sexual Harassment Witch Hunt 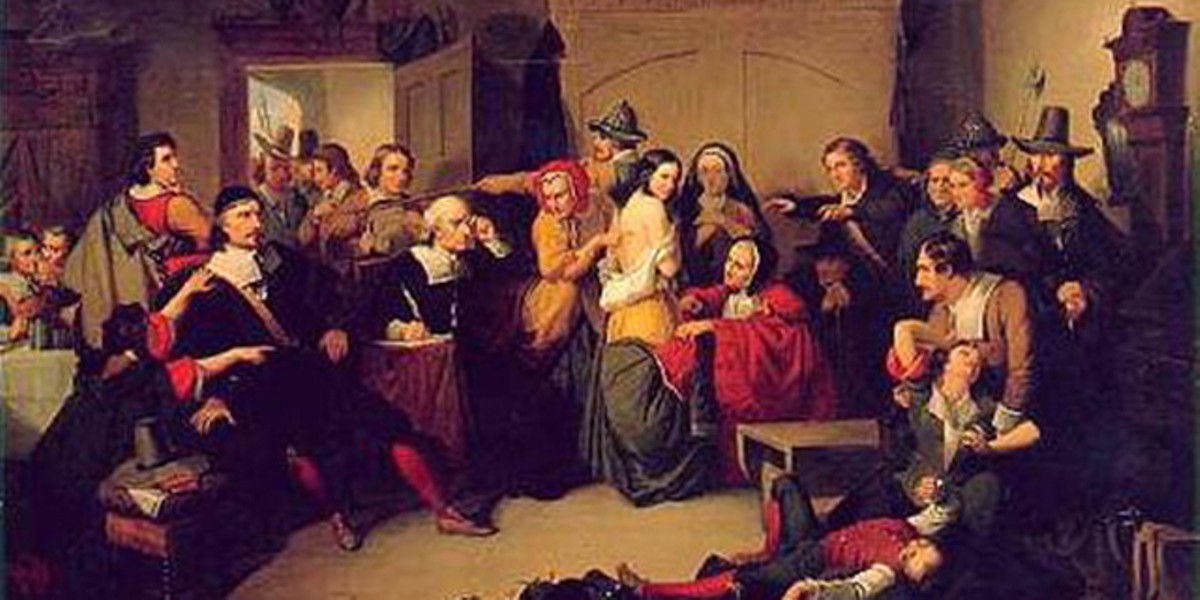 Public domain "The Examination of a Witch." Painting by Thompkins H. Matteson

It was a surprise when the tidal wave of sexual harassment and assault allegations against Harvey Weinstein, Bill O'Reilly, James Toback, Mark Halperin, Donald Trump, Roger Ailes, John Besh, Kevin Spacey, that guy from Amazon, holy shit, that other guy from NPR and Dustin Hoffman — there are more but they're starting to blur together into one grabby mass — resulted in not just a brief news cycle of pearl clutching but the radical rethinking of American society. Overnight we were prioritizing women's safety and well-being over men's God-given rights to casual sexism, predatory behavior and semi-nude massages at the office. Frankly, nobody saw it coming.

This new obsession with treating women like people can be confusing, especially for those who looked to Mad Men as an aspirational HR training video. So here are some tips to help men navigate office interactions now that they've found themselves just one unwelcome elevator fondling away from career disaster. If that's not a witch hunt atmosphere — just like when powerful men whipped up mobs, hanging, torturing and burning mostly women — then what is?

Luckily, some of the same survival techniques that women have relied on to avoid being sexually harassed might be good fits for male filmmakers, CEOs, chefs — any men, really, who have to work with crazy women liable to cry harassment at your friendly banter or when you innocently force a colleague to watch you handle your junk.

Not going to sugarcoat it, fellas: Avoiding a sexual harassment witch hunt is going to be stressful. Take it from the ladies who've been swerving away from your lingering hip-to-shoulder hugs for generations, you'll need to maintain a constant and exhausting vigilance. On the bright side, scanning for danger and dissecting your every move will eventually become tragically natural.

First rule: Stay alert ... but upbeat! Look up from her rack for a second — is she scowling? Not good. Even a so-called "good woman" who seemed totally reasonable a moment ago can unexpectedly flip out over a couple of unsolicited dick pics. Defuse the situation by smiling and laughing off any uncomfortable witch-hunt-y comments like, "Put some goddamn pants on," or, "What are you doing in my apartment?" Then get out of there.

It's been suggested that companies ban closed-door meetings with women or simply cover female employees with business casual drop cloths. But their problematic body parts are still dangerously within lurching distance. Instead, conduct meetings through a cracked door or in a buggy with an Amish chaperone seated between you. Look at Mike Pence, who doesn't have any of those D.C. power meals alone with women. Just like hanging onto the shellacked loaf of bread from his engagement picnic, it's totally normal. You can also avoid the air of unsupervised intimacy by bringing along a hand puppet or, if your briefcase allows, a ventriloquist's dummy. (You'll want to establish this puppet as a cis-hetero male so it's not weird.)

Try as we might to dress "modestly" or actually blend in with the office walls and furniture to avoid unwanted attention, changing the way we dress has never guaranteed any safety for women. However, for men staving off would-be witch hunters, wardrobe changes can be helpful. Whenever possible, avoid attending meetings in your bathrobe or, you know, naked. If you feel the need to lay low after leaving your colleague a few drunken, obscenity-filled voicemails, go to the office disguised as a filing cabinet or a potted plant for a few days. Just keep your head on a swivel if you go with the plant option.

Women have always had to weigh with whom we're safe, re-evaluating if alcohol is involved, and you should follow suit. Don't expect a woman who supports pro-man causes like reclining chairs or Woody Allen movies to be a safe harbor. She might still fuss when you email her porn or mount her leg in the breakroom. Even a fellow man may break the sacred locker-room code and stand idle during witch-hunt activity or narc on you like a Salem stool pigeon, though it's extremely rare. Way to stick together, guys! Still, if referring to a female coworker with a descriptive noun and a body part instead of her name doesn't get a high five, watch your back.

If you feel you're being targeted in a witch hunt, think before you act. We ladies have learned the backlash can be — wow — really something, with equal numbers of people calling you a liar or attacking you for not speaking out sooner. Ask yourself these maddening questions first: Are you overreacting? Will you look crazy? Be labeled "difficult?" Do you really want to hurt some woman with a family that depends on her over one mistake? Think about her children.

If there's one thing we women have learned, it's that you can never second-guess yourself too much. Was that really a witch hunt? Because plenty of men at your office have worked with her and never had a problem. Are you sure that's an actual angry mob dragging you from your home and stacking logs for your immolation, and not a historical re-enactment? Maybe you're just being hypersensitive. Look at Brad tied to that pyre over there. Brad isn't complaining. Brad's a team player.

Theoretically, you could simply avoid groping, coercing and assaulting coworkers. But let's be realistic. Maybe, unlike women, you haven't cultivated the elephantine skin you need to do your job with a target on your back. Maybe this witch-hunt climate is too much for you. As Donald Trump Jr. once said, "If you can't handle some of the basic stuff that's become a problem in the workforce today, then you don't belong in the workforce. Like you should go maybe teach kindergarten." Then again, kindergarten teachers probably won't put up with your repulsive, entitled bullshit, either.

Jennifer Fumiko Cahill is the Journal's arts and features editor. Reach her at 442-1400, extension 320, or jennifer@northcoastjournal.com. Follow her on Twitter @JFumikoCahill.