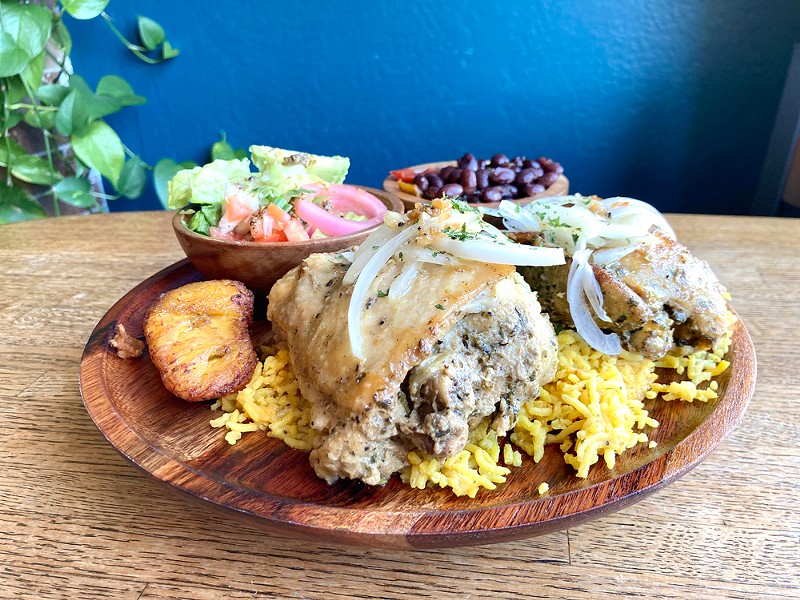 Alby Alawoya's twist braids swing a little as she pivots from table to table on Northtown Coffee's patio (1603 G St., Arcata). She and her mother, Monique Sutton, run Mother's Cooking Experience out of the café's kitchen and alongside its baristas. They serve breakfasts and lunches six days a week, stock and prep on their off day, and take on catering gigs once the café closes in the late afternoon. Once a month, they also host prix fixe, multi-course Afro-Cuban dinners with music and dancing — the "experience" part of the name, to "tell the story" of the food and its cultures. It's a lot of work for a two-person operation, but Alawoya and Sutton are on a mission.

That mission is ultimately one of independence: to purchase property on which Alawoya and Sutton can grow produce for Mother's Cooking Experience, putting Sutton's sovereignty-geared garden experience to work. But the immediate target is a food truck, for which the mother and daughter duo are trying to raise $30,000 through fundraising, sales and events, including hosting a pop-up Waffles and Wings brunch at Septentrio Winery on Sunday, Oct. 23.

Alawoya, who owns the business and handles the marketing, bookkeeping and most of the shopping, commutes an hour from her home in Klamath, where she lives "with goats and chickens and dogs." She grew up in Los Angeles and originally came to Humboldt for a business degree from Humboldt State University. After graduating, she moved around between New York and Georgia, then back to Los Angeles, where she was a project manager for Sweetgreen restaurants. In 2019, she returned to Humboldt, where she saw an opening in the marketplace.

Alawoya also does prep work and "whatever my mom tells me to do," she says with a laugh, adding she's proud to have been trusted with the job of saucier. The recipes and the menu are all up to her mother. While she admits sometimes they "bump heads," she says she and her mother have always been close. Even during her rebellious teen years, "My mom always kept a tribe of strong, opinionated friends around and no one ever let me disrespect my mom." Today, they also share a good working rhythm.

Sutton learned to cook from her maternal grandparents, who were born in Cuba and worked in domestic service in the U.S. "I always loved to be in the kitchen with my grandmother cooking," she says. She learned Nigerian cooking from Alawoya's father, Terry, who immigrated to the U.S. from Lagos, Nigeria, as a young man, and with whom she's still close.

Before teaming up with her daughter for Mother's Cooking Experience in 2019, Sutton had built a full food career. She'd worked for Network for California teaching elementary school children nutrition, partnering with a professional gardener to create a rooftop garden they used to grow, harvest and prepare produce with the kids. She followed that up with helping run a summer meal program for children through nonprofit Inner City Child Development in Compton, which evolved into a year-round service helping feed kids struggling with food insecurity. "All Alby's friends worked for me during the summer," she recalls fondly.

For a while, Sutton also worked with a close friend on his Central American soul food truck Postcards, appearing on a season of the Food Network's The Great Food Truck Race in 2015. "It was a great experience," she says. "We learned so much about the things we could do, how hard we could push ourselves."

Both mother and daughter have had plenty of opportunity to push themselves at Mother's Cooking Experience. They've held cooking classes, provided breakfast and lunch service for local businesses and held pop-up dinners. Once they moved into Northtown Coffee's kitchen, they focused on a café menu, but now they've returned to their roots with Afro-Cuban food, what Alawoya calls "the blending of culture and spices."

Some of those spices are a challenge to source locally but it's worth the splurge to explore classic Caribbean and African dishes at the monthly six-course "tasting experiences," the last couple of which have sold out. Limited to around 20 people, they feature ingredients like oxtail, casava and bacalao. Of the African offerings, egusi soup is Alawoya's favorite. "They take something that's so simple like a melon seed and grind it into a powder to thicken the soup ... in which you dip pounded yam." It's a meat-rich "warrior's meal," she says, hearty enough to feed a person for a whole day. "It started off as a poor man's food and now it's the most expensive item you can get at any African restaurant."

On the Cuban side, Alawoya says, "For me there's nothing better than rice and beans and chicken." It's hard to argue with her over a plate of pan-browned citrus and garlic mojo marinated thighs, the meat of which falls from the bone with the press of a fork, its herby juices soaking into the saffron rice. The little wooden cup of firm, homemade black beans cooked with garlic, red peppers and onion makes an earthy complement, as does the jammy hunk of caramelized plantain on the side.

Alawoya lobbied hard to include fried chicken breast on the menu. Sutton's is visibly juicier than would seem possible under the seasoned crunch of its crust. The sandwich version comes on a soft, oiled and grilled bun with aioli, lettuce, chopped tomato and green onion. Sutton, for her part, pushed for the Cubano, served closer to how she enjoyed it at home: piled instead of pressed, and topped with greens and a mustard vinaigrette. Instead of thin layers, there are Sunday-dinner hunks of mojo pork, pickle and a thick, glossy slab of ham with Havarti, which Sutton feels brings more flavor than Swiss. "And I want all the flavor."

The duo is fundraising their own way, too. Alawoya looked into crowdfunding sites and the cuts they take, and decided they could manage it without the middleman. She put together a few donor packages (swag, food, an eventual gala) and makes her pitches in person with the people already enjoying the food. "Our goal is to purchase property and tell our story of food sovereignty," Alawoya says, explaining the structure of restaurant businesses and their overhead leave owners living more or less paycheck to paycheck, one calamity away from closing. To grow their own ingredients, she says, would be an extension of the work her mother did with her students in L.A., less farm-to-table than "food for survival."

So far, the fundraising is going well, according to Alawoya. Though going without the usual additional staffing in order to save money on catering gigs takes its toll. The pair recently catered a wedding on their own. "I just killed my mom and I," says Alawoya, her voice cracking into a slightly hysterical laugh. "We just left a little of our bodies."

"That young lady is a very hard worker," Sutton says of her daughter. "I just cook. She does everything else it takes to run this business." Sutton says she's pleased customers enjoy her food but shrugs off a question about how labor intensive it is.

"I am a woman of a certain age and I'm not afraid of hard work," Sutton says. "This is my mission to make her dream come true. If someone told me that I would have the great experience of working with my daughter in the food industry, I would have laughed. ... I am ecstatic. I wake up every morning ready to do this."

Jennifer Fumiko Cahill (she/her) is the arts and features editor at the Journal. Reach her at (707) 442-1400, extension 320, or jennifer@northcoastjournal.com. Follow her on Twitter @JFumikoCahill.