A Motherlode of a Week

These people want to give you a show 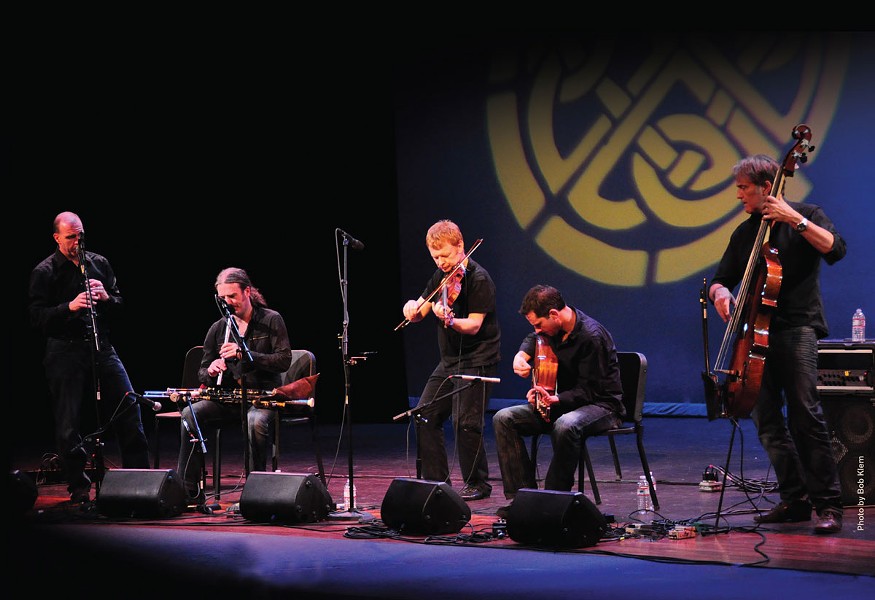 Dear Humboldt, our local talent bookers have been going a little nuts making sure you have no excuse to stay home. Please read on and plan accordingly.

First and foremost, on Friday night, Motherlode is releasing a debut live CD, All in Good Time featuring DJ Logic, Bill Summers and legendary trombonist Fred Wesley. Drummer Pete Ciotti — whose other bands include Nucleus and Full Moon Fever, and who owns both the Jambalaya and Big Pete's Pizzeria — sat down along with his very pregnant wife Belle and, despite being fresh from having his garage robbed in the dead of the night before, took some time to share his thoughts on the band, making music, raising a family and the importance of doing what you love.

NCJ: Tell us about the live performance aspect of the new CD.

PC: We figured we'd bring the studio to the stage and handpick what we liked best. One of the highlights was when we did a show at Hum Brews with Fred Wesley, who played with James Brown. It was awesome to back him up and now we have this live album with this really amazing special guest. We kept going with that idea and brought out a percussionist who played with Herbie Hancock — Bill Summers — and did a show with DJ Logic, so we got to have all three of them on our record, which is amazing.

NCJ: What was the impetus for starting Motherlode?

PC: Greg Camphuis, he plays lead guitar, wanted to get a funk and Afrobeat large ensemble together. I hadn't even played drums for maybe two years — after Nucleus kind of stopped and I was having babies, kids and family, I sort of put drums on hold. Playing in Full Moon Fever was fun, but something was missing, some creative element was lacking, so I said, "Yeah, let's do some things," and it snowballed from there.

Belle: He's always got to have several irons in the fire!

NCJ: No kidding. How do you juggle it all?

PC: We do juggle! It's fun, I don't know, I definitely don't pretend to have it all figured out. ... I play now more than ever and I want to make records because I want to leave something, not a legacy exactly, but something so when these kids grow up they can say, "Look what Daddy did." As much as it's nice to own a pizza shop, that's not really what I want to be known for.

NCJ: As a veteran of the music scene, what lessons have you learned?

PC: I guess I'm a veteran now [laughs]. I bring a small bit of a business approach — I think we should dress up for shows, book the right gigs, be professional. Definitely have fun, but people have paid money and have decided to spend the next three, four hours being part of what you're doing, so give them a show. I've always liked music, but I feel there's a sacredness now.

NCJ: There's been a lot of loss in the local music scene over the past couple years. Has that impacted you?

PC: Absolutely. I remember specifically the day when Bryan Osper passed away and having my own moment with that and — this is going to sound kind of hippie-dippie — I remember sort of speaking out to him and saying I'm definitely going to be there to keep this torch going. He was 26 when he died and was just scratching the surface. If he were alive today, I really feel like that kid would have just blown up in music. There's a lot of people in this music scene that are no longer here, and every time I think about that, I think about how at any time this could all be taken away. And that's part of the sacredness I'm talking about. ... You know how life is — as we get older all these things have happened that have shaped who we are. Music has shaped who I am, so yeah, there were definitely some things that happened along the way.

In other Friday night news, DJ Red is celebrating his 30th year behind the turntables by guest spinning at Humboldt Brews' ever-popular Soul Night. The theme is "SWEAT!" so break out your sexiest jogging suits, unitards and headbands. Do not wear pleather. Tickets are only $5 and you need to buy them now. The hot groove action starts about 9 p.m. Grown-ups only.

Over in Blue Lake, a sweet-in-all-meanings-of-the-word duo known as Daniel and the Blonde will plunk your jaded heartstrings with eloquent Americana at the Logger Bar. Be sure to have a drink to cry into. This is another 9 p.m., 21-and-over show.

Saturday night, please experience Fishtank Ensemble's one-of-a-kind spectacle of virtuosity at the Arcata Playhouse complete with two violins, slap bass, musical saw, flamenco and jazz guitars, opera, jazz and gypsy vocals, and one little banjolele enabling the band to tackle everything from French hot jazz to wild Serbian and Transylvanian anthems, flamenco and oddball originals. The show begins at 8 p.m. Tickets are $15 general, $13 students and Playhouse members, and are available at Wildwood Music, Wildberries, or online.

Later that same night, Portland band Hillstomp will be recycling traditional blues elements into a distinctive brand of DIY hill country blues stomp (hence the name). Think North Mississippi trance blues, a bit of Appalachia and a dash of punkabilly. If that tempts you, know you won't be disappointed. You may even find something close to religion — for a mere $10. Arann Harris opens. Doors at 8:30 p.m., music around 9:30 p.m.

Switching gears, the question "Did your pot kill a hawk?" is being asked at a benefit aiming to stop the use of rodenticide in pot grows. The gig is co-sponsored by EPIC, Environmentally Sound Promotions, the Mateel Community Center and KHUM, with music by Los Marijuanos (Mexican R&B pot poets), The Camo Cowboys (lighthearted rock 'n' roll) and Blue Sky Pie (political power folk). It all goes down at the Mateel Community Center on Saturday. The doors open at 7 p.m. with music starting at 7:30 p.m.

Irish band Lunasa hits the Arcata Playhouse on Tuesday — an opportunity to see the festival headliners in an intimate venue. In addition to being fine musicians of the Celtic persuasion, the band members have a sense of humor befitting the theatrical space — when last at the Playhouse in 2012, they took a break only to reappear in costumes they came across backstage. Frontman Kevin Crawford (flute/whistle) is reputed to be especially hilarious. $20, $18 students, with music at 8 p.m.