A New Type of Music 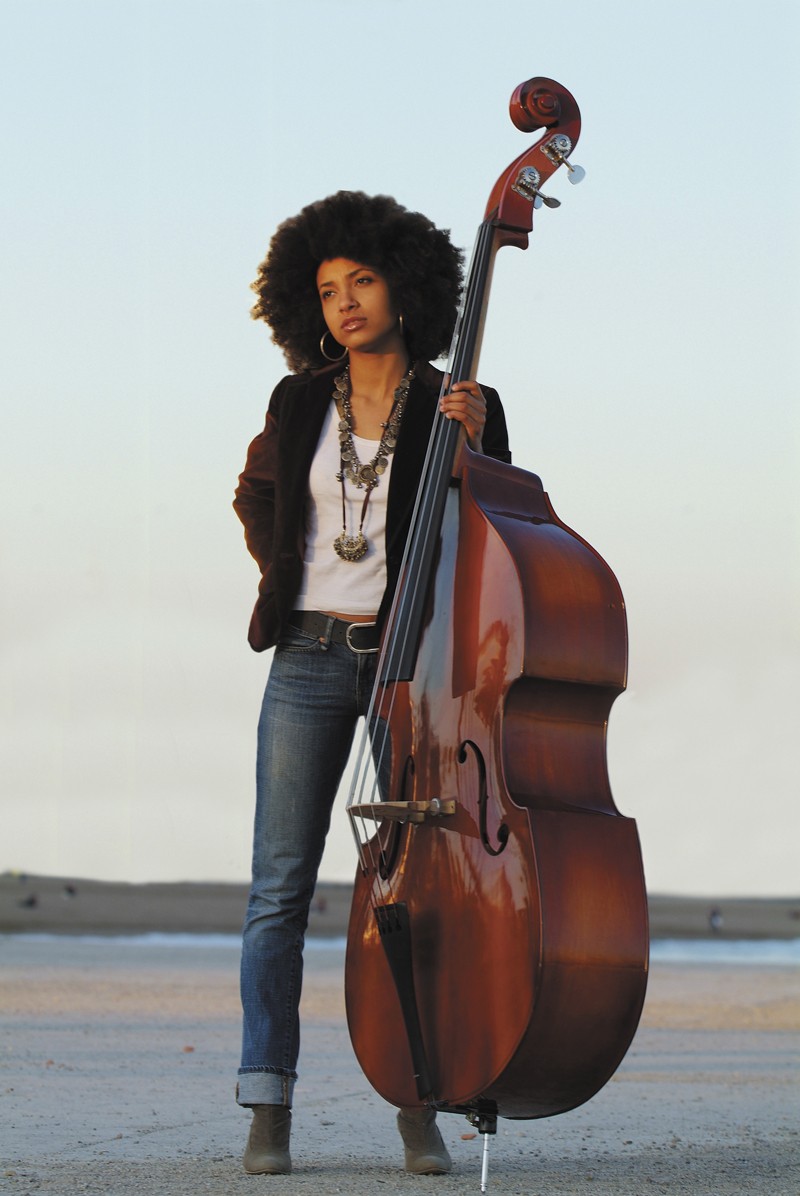 Statistics prove it: People are curious about Esperanza Spalding. After the willowy stand-up bass player with a huge Afro played on PBS' Austin City Limits earlier this year, she soon became the most searched person on Google. That followed on the heels of a very high profile gig in Oslo late last year: She was chosen by President Obama as his opening act when he received the Nobel Peace Prize. Nobel Committee Secretary Geir Lundestad noted that she played a "new type of music" for "a new type of laureate." Her music is mostly referred to as jazz, and she's definitely jazzy, but Lundestad is right -- she's taking her music new places.

Spalding is just 26, but she started early. As she tells it on her Facebook page, she heard cellist Yo-Yo Ma on Mister Rogers' Neighborhood when she was a four-year-old in Portland. "That was when I realized that I wanted to do something musical," she writes. "It was definitely the thing that hipped me to the whole idea of music as a creative pursuit." Her mom bought her a violin and she was soon a member of the all-ages Chamber Music Society of Oregon. By the time she was 15 she'd risen to concertmaster (lead violin) while learning bass on the side. At 16, she'd finished high school and moved on to PSU on a music scholarship, then leapt to the prestigious Berklee College of Music, where she shined. At 20, she became the youngest faculty member in the school's history.

At this point she has three albums under her belt. Her latest, Chamber Music Society, gives a nod to her roots and plunges forward with her new type of music: jazzy bass and her smoky, delicate voice central, with violin, cello and guitar behind her. This week she played NPR's Tiny Desk Concert show with her chamber group. Her setlist: "Little Fly," a William Blake poem set to music, a bass/scat solo on Lionel Hampton's "Midnight Sun" and a new composition, "Apple Blossom," a brilliant hybrid of folk, jazz, classical and pop that sparkled as it floated effortlessly.

She's on a short tour with the Chamber Music Society combo. On Sunday she's at the Louise M. Davies Symphony Hall in S.F. On Monday she hits the Kate Buchanan Room at HSU. Get a ticket now.

Also jazzy, though more or less straight-ahead: a Redwood Jazz Alliance concert in Fulkerson Hall Tuesday by the Tom Harrell Quintet, led by the stellar trumpet player from NYC. I love Tom's succinct Facebook bio: "Tom Harrell plays and writes music." Direct, to the point, no frills. That's the way he plays, too, as he spins out gorgeous melodies. Saxophonist Wayne Escoffery, pianist Danny Grissett, bassist Ugonna Okegwo and drummer Rudy Royston fill out the quint. As usual, the band also leads a free workshop. This time it's Tuesday afternoon in the HSU Music Building.

More jazz? Down at Persimmons Friday saxophonist Yolanda Nickell plays with her hubby Joe Kennedy on keys and Sam Maez on trumpet. On Saturday it's NYC pianist Jack Spann with Francis Vanek on sax and Joani Rose on vocals.

Tuesday at Humboldt Brews guitarist/songwriter Jerry Joseph plays with Wally Ingram, a percussionist you may remember from tours with David Lindley. Jerry has deep local roots: His family is from here, and he attended CR and was in one of Humboldt's first reggae bands. "We had a reggae band called the Roots Rockers. It later became Graffiti," he told me on a previous visit. "I was living behind the Pythian Castle. That's where I met Brad Rosen. He and I started Little Women." Jerry and Brad would later form the Jackmormons. Now Jerry's gone semi-solo.

Next night, Wednesday, HumBrews has The Dead Kenny G's, another "new type of music" band, with drummer/vibes player Mike Dillon, bassist/saxophonist Brad Houser from the New Bohemians and the anti-Kenny G, Skerik, on sax and keys.

Seattle garage rockers The Blakes have a new record and their own iPhone app, which is rated 12+ for the following: "Infrequent/Mild Sexual Content or Nudity, Mature/Suggestive Themes, Alcohol, Tobacco, or Drug Use or References, Profanity or Crude Humor." The profane trio returns to the Jambalaya Saturday, where they share the bill with local alt. legends Strix Vega. (Do they have an app?)

Don't know much about Sea Wolf, although I read the Jack London novel. The neo-folk/rock band is led by Alex Brown Church, but now he's touring solo and still calls his act Sea Wolf. He'll be at the Depot Thursday, traveling with songwriters Patrick Park and Sera Cahoone.

Between the two-day Medieval Festival of Courage and Saturday's Humboldt Hoptoberfest, Blue Lake should be hoppin'. As usual, the beer bash at Perigot Park has music all day, including The Fickle Hillbillies, Eyes Anonymous, The Living Rooms, The Phoebes, Fear Mia and The No Good Redwood Ramblers (who play later at the String Thing). Dell'Artisans will be clowning around, and there's a 50/50 raffle. Proceeds go to the Blue Lake Educational Foundation, who are also hosting a post-Fest-o-Courage Knight's Dinner at the casino Saturday evening. (Tempest is in the Wave that night; Ponche plays their AfroCuban salsa Friday.)

When that big earthquake hit Eureka earlier this year, more than a few bricks shook loose. As you probably recall, one of the (near) casualties was the brick building that once housed the Old Town Bar and Grill, a Second Street jewel and a major Eureka music venue back in the day. With former Oatbag owner Debra Lazio at the lead, boomers who'd worked, partied and/or played there came together in a new-fashioned way -- as a Facebook group -- reminiscing about old times and wishing aloud that someone would resurrect the moribund music palace. They got their wish: Kurt Kramer stepped up and bought the place. Kurt specializes in projects like this (think Vance Hotel, the Professional Building and the Sweasey Theater/Arkley Center). He has a crew hard at work on restoration, although it's doubtful that it will return as a nightclub.

Meanwhile, the Facebook group turned toward a let's-get-the-old-gang-together project. The glorious Lazio era at OTB&G ran from 1980 until 1989, so a 30th anniversary party was in order. Drummer Danny Montgomery, who'd worked the space in numerous bands, started contacting musicians (he's also a consummate networker). The result: a two-night Old Town Bar & Grill 30 Year Reunion Party this Friday and Saturday at Humboldt Brews, with seven resurrected bands.

Debra supplied a list of local and out of town musicians coming from "as far away as Europe." (That would be Danny, who makes his living over there playing behind American and Euro music legends.) Doug Marcum, guitarist for Dream Ticket and Rolling Bob is here from L.A. Ray Griffin of Dream Ticket is in from Houston. Jenny Bennett, Dick Koenig and Steve Smith are coming from San Diego. Dave Storie and Phil Dean of Commotion, as well as Bishop Mayfield and Rich "Dr." Ross are coming from Oregon. Doug Vanderpool is down from C.C. Still-locals Donna Landry, Brian James, Julie Froblom, Paul DeMark, William Mitchell, Ken Lawrence, Charlie Thompson, Joey Arnot, Bill Moehnke, Ernie Ernshaw, Kenny Susan and Larry Lampi are all on board. Backstreet will have Sabrina Francis as guest vocalist. Soul man Earl Thomas will sing with Mason Dixon-Commotion (not his band).

Here's how it lines up: Friday they'll have Backstreet, Commotion, Mason-Dixon Revival, and Bishop Mayfield and Flex with special guests, including Jenny Bennett. Saturday it's Dream Ticket, Rolling Bob and blues by Dr. Ross the Hellhounds, again with many special guests. (Of course the whole thing is special.) Music starts early (8 p.m.) both nights. Doors at 7 so you can reminisce before it gets loud and it's time to dance. Eighties attire is not encouraged. Be there.