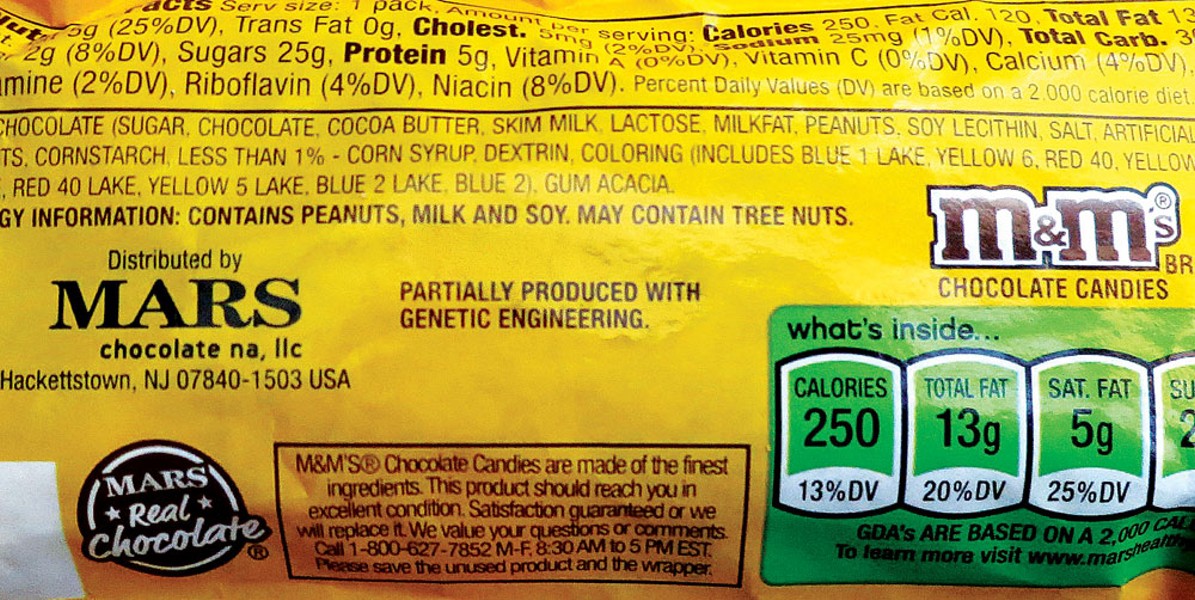 Mars, Inc. began labeling its GMO products earlier this year in response to Vermont's 2014 law, implemented July 1, 2016, and about to be nullified by the new federal law. Photo by Barry Evans

An unprecedented flurry of bipartisan activity followed the July 1 implementation of Vermont's genetically modified (GM) food labeling law. Superseding individual state laws (which would have brought chaos to the food industry), a national GMO labeling law passed both houses in just a week. The president will probably have signed it by the time you read this.

Big victory for the anti-GMO forces, right? And defeat for those of us who think GMO labeling makes as much sense as the mandatory labeling of food containing DNA. (Which 80 percent of Americans think would be a good idea, according to an Oklahoma State University study. Sigh.) But it's not that simple.

For one thing, the phrase "genetically modified" is ambiguous. Take cheese, 90 percent of which is produced with artificial rennet, the stuff that curdles milk. It used to be extracted from the stomach lining of calves but modern rennet is now synthesized using genetic engineering. However, artificial rennet doesn't actually contain GMOs, so should it come under the new labeling system? Similarly, should refined soy oil or beet sugar made from GMO crops but not actually containing genetically modified protein or DNA be labeled? How about "secondhand" GMOs, such as meat from livestock raised on genetically modified corn and soy? Looks like all these will be excluded but legal challenges are in the wings.

Then there's "radiation breeding," in which the seeds of fruits and vegetables are bombarded with X-rays to yield mutations, such as the popular Rio Red grapefruit. Such artificial mutations are excluded from the new bill, as are foods modified with the CRISPR technique, which allows individual genes to be "switched off." (That's how breeders created non-bruising white button mushrooms.) Isn't that genetic modification? Nope, it's genetic "editing" — doesn't count. Sort of like telling fruits and plants they can play with themselves, but don't get it on with each other.

At this point, it's a bit of a crapshoot what's in and what's out. What's worse for labeling advocates — actually, for everyone, since it looks right out of the "conspiracy theory" playbook — is that a QR or quick response code can substitute for the words "Produced with genetic engineering." And for smaller manufacturers, just a phone number or web address does the trick.

Of course, simply stating that ingredients in a foodstuff have been created by genetic engineering, as a July 14 Vox commentary put it, "is about as informative to the consumer as whether a car part was made by robots or human workers." Any potentially useful information (Does the use of genetic engineering for this food reduce pesticide use? Has it only been adopted for cosmetic purposes? How much of the contents have been modified? Does it affect vitamin content?) is missing.

So we're left in a messy middle ground. If you have a smartphone and the time, you'll be able to tell if what you're buying contains GM ingredients — at least according to a vague definition. But there's no context, just the (unjustified) stigma. Is it too much to hope that some good will come of all this kerfuffle? On average, each of us ingests nearly 200 pounds of GMO food every year. Maybe all this labeling will force us into realizing that, as the FDA insists, "genetically engineered foods don't present greater safety concerns than foods developed by traditional plant breeding," and some balance about GMOs will prevail.

Barry Evans (barryevans9@yahoo.com) is so ready to move on from the GMO controversy.