A Slow Trip Down the Avenue 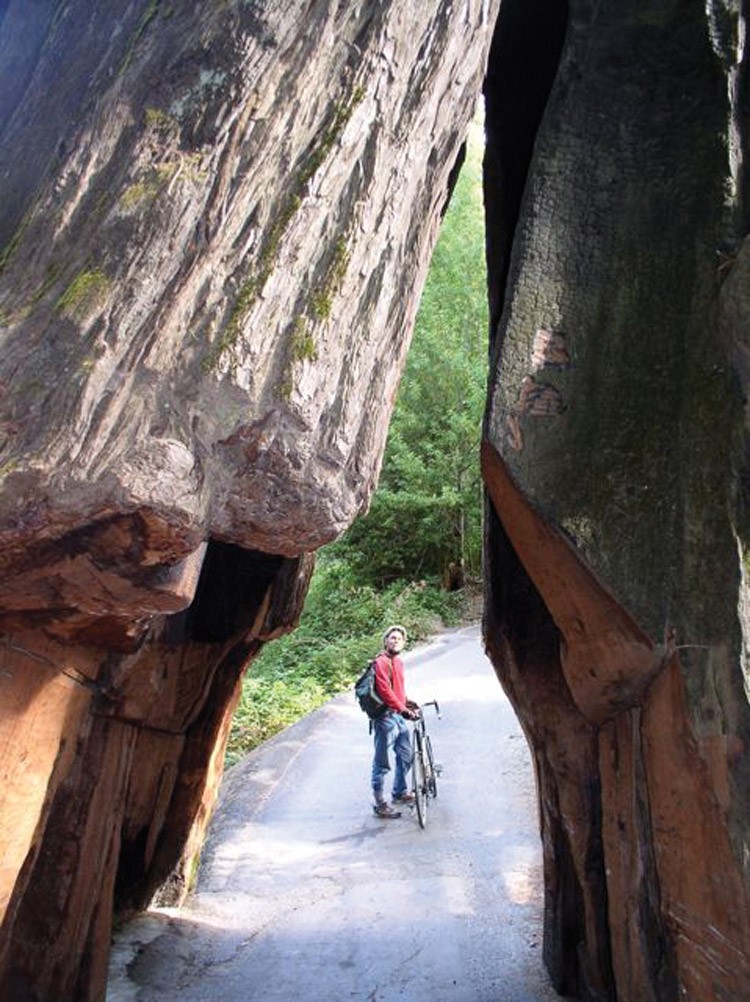 Sometimes there are things in our lives that we pass by so often we forget just how special they are. Over the years my family has made the long drive down to the Bay Area enough that we have reduced the trip to a series of bathroom stops with a refueling in Willits. The first portion of the trip is a blur of redwoods followed by blur of oak woodlands, vineyards, and, oh yes, the "In and Out" in Santa Rosa. We see the signs for the "Avenue of the Giants" but it has been far too long since we actually took an exit to Redcrest, Myers Flat or Miranda.

I recently loaded up my bicycle in our van and cajoled my friend Dave to sign on for a day of cycling along the 31.5-mile Avenue of the Giants, also less glamorously known as State Highway 254. We left Arcata early to beat the warmer afternoon temperatures of Southern Humboldt. We were committed to exploring the avenue, kitsch and all.

Until 1960 when the current routing of 101 was completed, the Avenue of the Giants was part of the main north-south Redwood Highway. The trip north from San Francisco was initially a three -and then a two-day journey as the road was gradually improved. It was a time when timber was still king and salmon still populated the Eel. Abundant roadhouses dotted the way, tourist attractions beckoned, auto cabins and camps offered accommodation, and the redwoods rose tall. Now, in many of the don't-blink-or-you'll-miss-them hamlets, the sense of just hanging on is palpable. You can almost hear the screech of the fingernails as the businesses, inns, woodworks and burl shops fight the slow slide into history.

As we exited 101 to park and unload the bikes, Dave commented, "I feel like we are already in another universe." The old growth redwoods, so big that you can't see the tops, create a perpetual dusk at the ground level. There is a deep and pervasive quiet. Because it was early, the first miles were silent and the air cool along a roadway that snakes through the forest. The relatively level topography made for easy riding.

Humboldt Redwoods State Park dominates the avenue, offering an array of sights, trails, picnic spots and camping options (Burlington and Hidden Springs campgrounds would work well if staging a multi-day avenue experience). The park proclaims that it protects the "largest remaining stand of virgin redwoods in the world," and there are immense old growth trees along most of the length of the avenue. My personal favorite is the Founders Grove with its easy walk to the fallen Dyerville Giant, which -- until it fell in March 1991 -- was the tallest tree in the park. But there are countless opportunities to stop and absorb the magnificence of these arboreal giants.

We did plenty of absorbing. However, like many before us, we succumbed to the siren call of the Shrine Drive-Thru Tree, made "world famous" by numerous postcards generated over the years. In my quarter-century-plus on the North Coast I had always resisted the temptation to visit a drive-through tree. My low expectations were confirmed. Even the small charge seemed excessive for the experience, but as Thomas Meagher, proprietor of nearby Riverbend Cellars later told us, it is still the biggest attraction of the area, pulling in far more than his tasting room.

The road follows the main branch of the Eel River for roughly the northern-most dozen miles and the South Fork of the Eel for the remainder. If the afternoon is warm as it was for us, the South Fork offers tempting swimming holes or wading options. Through much of the fall, the low flow keeps the water warm and the current relatively safe. It is worth noting that the placid Eel is not always so benign. Signs along the avenue document high water marks of the 1964 flood, a catastrophe that completely wiped away many communities. Ginger Sarvinski, whose family operates an organic vegetable stand near Pepperwood, showed us pictures of that once vibrant village prior to December 1964. And at the former location of the town of Weott, we gazed at the pole showing the high water mark 33 feet above the roadway. Given the modest flow of late summer, it was difficult to imagine the raging torrent that inundated bustling Weott, destroying more than 50 buildings (Weott was later relocated to higher ground nearer the freeway).

As we rode toward the south end of the avenue, the pungent aroma of the roadside growth of fennel accompanied us along sun-exposed stretches of highway. We passed through Miranda, and had it been a little later would have been sorely tempted to stop for lunch at The Avenue Café. Instead we continued on south and chose the pleasant outdoor seating at the Chimney Tree Grill, across from the namesake hollow redwood that once housed a gift shop. While the griddle heated up, we began with a cheesecake appetizer (something cyclists can justify). The owner, who grew up in the area, had re-opened the restaurant several years after the storied gift shop and previous café had closed. She hoped that there would be enough business to remain open through October. The Chimney Tree itself, an empty shell with a concrete floor, is kept open for visitors to walk inside.

The calm and cool disposition of the avenue in the morning had changed on the return trip. Traffic had increased. So had the heat. We peered into the Riverwood Inn near Phillipsville. Built in the 1930s, it is reputed to be the last remaining roadhouse on the avenue offering booze, food, limited accommodation, entertainment and vintage red velvet wallpaper. Diane Hawk, in her book Touring the Old Redwood Highway: Humboldt County, has reproduced a wonderful collection of vintage photos of the Riverwood Inn and countless similar venues.

The Humboldt Redwoods State Park Visitor's Center just south of Weott is worth a stop too. The center's exhibits provide a helpful overview of the natural and human history of the area, including the fascinating story of Charles Kellogg. Kellogg's most lasting legacy, enshrined at the center, is the Travel Log. This is a hand-hewn redwood home he mounted on the back of a 1917 Nash Quad truck. From 1917-1921, Kellogg drove his eccentric mobile home across the country four times "to awaken interest in the great redwood forests of California, and to assist in their preservation." People like Kellogg and the Save the Redwoods League are among those we have to thank for the protection of this ancient forest.

We concluded our day with a stop at the Immortal Tree, as well as one of the fresh vegetable stands along the final few miles at the north end of the avenue near Pepperwood. It was a great day.

Over the next week, I found myself reflecting on our ride frequently. This may have been, in part, because every time I sat down I was reminded of the ride by my sore derriere. There had been something special about the experience. The magnificent redwoods I had expected. But perhaps what I enjoyed most was that by cycling we took our time, stopped to explore and talk with some of the people along the avenue, and relished the serendipity that unfolded.

I have found myself thinking about how to incorporate a taste of the avenue the next time we are heading for San Francisco. Slow down. Look up. Maybe, like the days before 1960, allow two days for the trip.