At first blush, Erin Youngblood-Smith and Amy Mathieson couldn't be more different. And that could have been a problem.

A white woman born and raised in rural Montana, Mathieson moved with her family to McKinleyville at 16 when her father, a pastor in the Baptist church, got a job there. She never really experienced diversity until she stepped onto the Humboldt State University campus to study psychology. After graduating, Mathieson was inspired to work with addicts and at-risk populations after a loved one's overdose death. She found herself Googling, "How do I work with substance abusers," and decided to pursue her masters in social work.

In contrast, Youngblood-Smith, a black woman, grew up in Oakland in the center of the culturally, ethnically and racially diverse Bay Area and spent some years working for an airline after high school. Inspired by a teacher at Merritt College in Oakland, Youngblood-Smith went on to earn an African American History degree from the University of California at Berkeley and set her sights on a master's in social work degree, viewing it as a stepping stone toward becoming a teacher.

When the two met, having joined a cohort of 10 students in HSU's master's in social work program, they were paired for an internship working with dependency attorneys in the county courthouse. They quickly found that despite their differences — religion, race, geography, upbringing — they were both outspoken, passionate and loud, with a similar sense of humor, and the same basic goals in life.

"Our differences didn't divide," Youngblood-Smith says. "I think that can be said of a lot of people once you get the opportunity to learn about each other from each other."

The two became close friends and, although they didn't know it at the time, their final project for their social work program began to take root. Over the ensuing months, the pair would meet for "wine Wednesdays" and talk. Often, their conversations turned toward the growing discord on campus regarding how students of color felt they were treated when out in the community. The two shared their perspectives, with Mathieson talking about the good she knows is in the local community and Youngblood-Smith sharing how, while she hasn't been the target of overt acts of racism, she's felt the cumulative, exhausting impacts of micro-aggressions — instances when she was treated differently than the white people around her.

Mathieson and Youngblood-Smith say they often talked about how to change this dynamic locally, how to impress upon community members how students of color are sometimes made to feel, how to change whatever it is about the local culture that empowers some to treat people differently based on skin color. What the community needed, they felt, was a media campaign that specifically celebrated the diversity students of color bring to Humboldt.

Then tragedy struck. David Josiah Lawson was stabbed to death at an off-campus party April 15, 2017. The news hit Youngblood-Smith hard.

"I was considering moving home," she says. But seeing how hard Mathieson was also hit by Lawson's death gave her hope. The pair decided they needed to do something and decided to use their master's project as the vehicle.

In order to get a master's in social work through HSU, each student has to complete a "sustainable project that meets a community need." The program offers no clearer direction than that and Mathieson and Youngblood-Smith felt they had their project. They decided to highlight the experiences of four HSU students of color in a media campaign that would underscore that while they love many of the same things about Humboldt as their white counterparts, they experience the local community very differently.

A year later, the campaign is in full swing. About 22 Arcata businesses now have posters hanging in their windows with the smiling face of a black student. Next to the photos are a few lines of text offering the student's major, something he or she loves about the local area and how they connect with community. While the posters are upbeat and hopeful, the accompanying videos — uploaded to the We Are Your Community Facebook page — offer more of a gut punch.

There's Dani, a 24 year old from Los Angeles, who says she was drawn to HSU because she loved the trees and the clean air. "I decided to attend HSU because I felt it was away from the noise, the chatter, the busy life of Los Angeles and I felt like it would be better for me mentally, spiritually, holistically," she says.

But Dani later adds that she feels like her "body has been criminalized" living here, recounting instances when she's walked past white people on the street only to feel them freeze up or "clutch their pearls, so to speak." She says she's felt "unwelcome" to the point that she's not really comfortable leaving campus and going out in the community.

There's Angel, a 20 year old from the Bay Area, who says she was excited to come to HSU because it was a "school in a forest" and the only college that accepted her and also offered free housing. With a beaming smile, she says she likes to go to the forest to write poetry. But she also says she feels like she's living in a racist community, recounting times when people have come up and touched her hair and asked if it was real, when she wore a scarf wrapped around her hair to class only to have a professor ask if all black people wear do-rags and another instance when she heard a clerk tell another store employee to "check the cameras" when she left a local pharmacy.

"I just feel like when I walk in the community people just look down on me," she says, adding that it has affected her studies. "I will probably withdraw from my classes this semester because it's so hard living here. ... I am leaving. I don't feel safe here. I don't feel like this place is for me."

And there's Jibril, a 27-year-old HSU graduate from Oakland who will be enrolling in the master's in social work program in the summer and has been working with local youth as a social services provider. Rather than a videotaped interview, Jibril reads a poem he wrote. 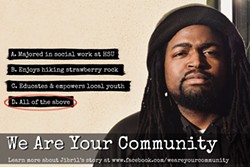 "You might want to be mindful of how y'all treat people here, because I'm someone who tells your kids what's wrong or right, I teach your kids life skills, kids coming up to me with their darkest secrets telling me everything about their lives and I know this community inside out," Jibril says. "I sometimes question why I'm fighting for this community when I'm treated at times like shit, I'm told by people I talk funny, I act funny, I act wrong, I drive the wrong car, I spend my money wrong. When you have money, they ask how you got it like your job doesn't pay."

In an interview with the Journal, Jibril says he agreed to participate in the project because of the people involved — Youngblood-Smith and Mathieson. And he believed in what they were trying to do. Jibril says he likes it in Humboldt and has met a lot of good people. But he also thinks it's important for the larger community to hear students' stories, to understand how some students of color are made to feel here.

For their parts, Youngblood-Smith and Mathieson are busily preparing for the culmination of their project — a "Diversity Day" event at the Arcata farmers market that will have a variety of organizations tabling, cultural demonstrations, a children's area where volunteers will be reading an assortment of culturally diverse stories.

The idea, Mathieson says, is to celebrate diversity and get white community members to "think about what we can do as a community to be allies to people of color."

The pair say they are proud of the project, proud of the response it's getting in Arcata and, most of all, proud of the students who participated. They hope it will be a catalyst for future change and they hope someone will step in to sustain it. But in the meantime, they're happy to have had the chance to show that — like their friendship —if people would just sit down and get to know each other, they might find out they have a lot more in common than they might think. It's a note that Jibril hit in the closing lines of his poem.