A Suggestion of Narrative

Paintings and drawings by Karen Sullivan 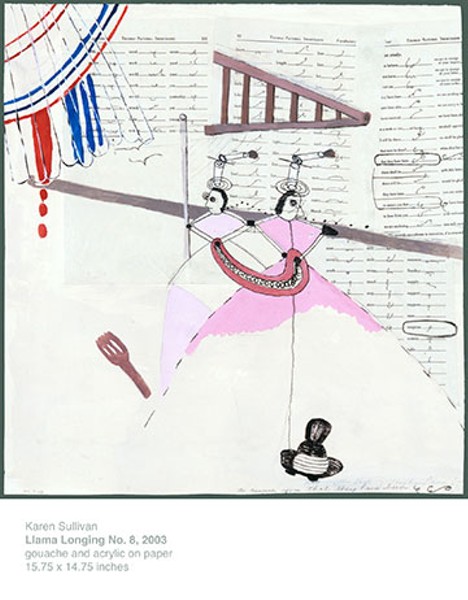 'Llama Longing No. 8' by Karen Sullivan

There was an eerie hush as crowds of people filed quietly past Karen Sullivan's drawings and paintings during Arts Alive! at First Street Gallery. Three good sized spaces offered pen and ink drawings, gouache paintings, 3x5-inch drawings enclosed helter-skelter in a glass case center stage with their digital counterparts across the way and an installation of years of Post-its in 12-foot strips six columns deep cascading to the floor. Paper, lots and lots of paper -- tacked to walls, mounted on canvas, encased in plastic. Pieces in their own 8.5 x 11 space, each a separate entity, work from 1989 until the present, largely based on dreams, intuition and spontaneous drawings.

Sullivan has been making art since the 1970s. Born in Oakland, she has lived more of her life in Eureka. She received her B.A. from Humboldt State University and taught for Eureka City Schools and at College of the Redwoods. She was a sculptor first, not taking her automatic drawings too seriously until a Los Angeles art dealer told her she should. The doodles -- or spontaneous drawings -- began 15 years ago while she was caring for her sick mother; notes about medication were accompanied by images symbolic of unsaid feelings and subconscious unthoughts.

Traumatic events have been a springboard or awakening for many an artist. The great Louise Bourgeois' work was based on memories of parental betrayal. Jim Nutt, a painter of caricatures from the 1960s, someone for whom Sullivan feels an affinity, depicts emotion, or lack thereof, through his portraits of women, usually stand-ins for his mother. For Sullivan, the wealth of childhood memories and a lively unconscious have created endless scenarios for her "stories."

Upon entering Sullivan's multi-part exhibit, the first gallery seemed to hit this observer hardest. It's a small room housing three series: "E + F," "Llama Longing" and "Chi-Co Longing." There is a weight and heft to the drawings that belie their outward delicacy and sweet, cartoon-like appearance; closer scrutiny reveals a darker nature. One notable drawing is "#8" from the "Llama Longing" series: a fairy princess-like figure clad in a long, pink ballerina skirt set atop shorthand paper on a paper-bag-brown background. The shorthand notes from her mother's own hand still contain a mystery for Sullivan, encouraging "an ongoing revisiting of unfolding scenarios."

As the title of the show, "Not As It Seems," implies, her recent paintings in gouache have turned to more narrative explorations, stories rife with possibilities. The new paintings and drawings draw on symbols from important events: Sullivan's father's death in 2004, the destruction of the family cabin in Redway, loss of childhood memories and awakening of environmental concerns -- more conscious, less subconscious. A new dimension was added to Sullivan's work, and the "Diver" series was born.

Moving to the center of the gallery space, it seems that the content and weight shift as the paintings grow larger and more colorful. The mint green pig in "Diver 2, Redway," with his large round spirally snout, is luscious. Rosy red divers painted on gorgeous powder blue softness inhabit "Diver 3." An indifferent pig in a black suit shows up in "E+F #19" surrounded by sandy beach hues and a stranded boat afloat in Sullivan's studio.

The small "Llama Longing" and "E+F" series, with their stark, paper-bag-brown backgrounds, hold a special intensity for this writer. Darkness is diminished with the larger new paintings. She says they're primarily about denial versus honesty and the tension of duality.

Sullivan implies that the content of her work is up for grabs when she says "there is a suggestion of narrative." Sometimes the dance in Sullivan's head stays the same, sometimes not, sometimes it's autobiographical; sometimes not. Sullivan's paintings are charged with emotion, but she says her work is concerned with "keeping the lid on." The thrill of exploring it is all that matters -- going for the ride, the delight of drawing, "making the marks and its implied sense of magic."

Rather than attempting to get inside Sullivan's mind for a better understanding of the complexities these series present, it might be better to make up one's own scenario, explore your own dreams, make magic happen.

Not What It Seems: Works by Karen Sullivan is at the First Street Gallery, 422 First St. in Eureka until March 9. Gallery hours are Tuesday-Sunday noon through 5 p.m. Sullivan will be at the gallery during Arts Alive! Saturday, March 7. For more on First Street Gallery and the exhibition go to www.humboldt.edu/~first or call 443-6363.