A sunbeam in the studio 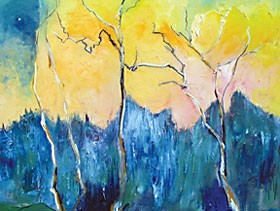 Janie Walsh didn't want me to wait for her. She said to head on back to the studio; she'd get there eventually. "Getting old's not for sissies," she called out with a laugh from the hallway, plodding slowly outside with a walker she painted in bright colors.

This weekend, June 16 and 17, Walsh is letting go of her life's work -- over 500 paintings and sketchbooks -- offering it all at a garden sale at her home on Buhne Street in Eureka.

As I waited for her in the studio in the backyard, I figured my interview with Walsh, a longtime advocate for the local art scene, had tearjerker written all over it. Here's a woman, a widow, one month shy of 90 years old, cute as anything, selling off a visual diary of her life: self-portraits, landscapes from her world travels, street scenes of tiny Humboldt towns that don't even exist anymore. Decades worth of perspective -- poof, gone.

But it turns out she's not sad about it. Last Thursday morning over coffee, we sat in her chilly studio, surrounded by paintings, talking about the past. Walsh, a lifelong Humboldt County resident, said simply that it's time to get rid of all this stuff. She doesn't want her daughters to have to deal with it someday when she's gone. Instead of sentiment, she offered little waggish insights ("Oh, Lord, I was too prolific," or, "Those price tags are tacky but I'm too old to care") that seemed to underscore a sense of detachment she has toward her belongings. This collection has become clutter, both in her house and in her mind.

"They're just artifacts now," she said. "The satisfaction comes while you're doing it -- when it's over, it's over."

And lately, it's harder for Walsh to find satisfaction in art. She had a stroke two years ago and it left her with limited mobility. Painting, she said, has become "terribly frustrating." She still gives it a try now and then and recently worked on some sketches but, she said, "It's not like it used to be."

Walsh is lanky and tall. Her blue eyes, framed by wrinkles, have a sort of mischievous twinkle. It's not hard to picture her as the coltish tomboy she describes, growing up in Freshwater in the 1920s, taking her homemade boat out on the crick, catching pollywogs, doodling. Her mother was never able to keep paper in the house, on account of all the drawing she did.

After high school, Walsh went to the California College of Arts and Crafts in Oakland. Her college years, living on the border of Berkeley, were the only time she lived outside of Humboldt County. After graduation, she came back to Eureka and taught art at elementary schools. She loved teaching. Walsh even gave painting lessons to her first husband, Bud Clarke. He turned out to be pretty good, and even exhibited his work in Los Angeles.

The couple was married 30 years when Clarke died. Walsh later married Dr. Joe Walsh. Together the couple traveled the world, visited more than 20 countries in all. "I never went anywhere until I was in my 60s," she said. "Except maybe Denver."

Walsh describes her style as mostly realistic, but also abstract. She said she never had a favorite subject -- landscapes, portraits, barns -- she liked them all the same. What mattered most, she said, was the composition of a scene, the lines, the textures. It had to catch her eye. The last painting she worked on before her stroke was of a redwood tree growing at a funny angle in a steep gully. She never finished it, but said she might give it another shot sometime.

"You just went at it," she said of her approach to painting. "You say, oh boy, that's appealing. I never was intellectual about it. And it's for fun, anyway. I believe in having a good time."

A sense of fun comes across in her work, a breezy, light sensibility that's like her character. Nothing uptight or smarmy. Nothing too perfect. It's loose, and free and soft. Unpretentious. But still some pieces show a darker side. One painting caught my eye precisely for that reason -- it was a portrait of a bizarre, almost scary, contorted face. It reminded me of Michael Myers' mask in the 1970s movie Halloween . The title of the painting, in fact, was Strange Face. What's this one all about? I asked her.

"Oh!" she yelled. "I think I was depressed during that one!" She laughed so much it was hard to picture her ever being depressed. Sometimes people go through those spells, she said. She figured the only person who'd buy a painting like that would be depressed, too. If she makes enough money, she said, she'll put a heater in her studio. Otherwise, she doesn't mind too much if the paintings sell. She wants this weekend to be more like a big party than anything.

I grabbed another unusual portrait, this one with a cross for a mouth. Is there religious symbolism here? I asked her. Maybe she was just depressed again, was all she could offer. She's not religious, though a number of her paintings are of local churches.

"Science is the thing I believe in," Walsh said. "You know, light travels at 186,000 miles per second. Think of that. Think of the distance it goes before it gets to us. That's what amazes me, not God."

Then a few minutes later, as if on cue, sun broke free from the clouds and poured in the studio windows. "Hey," she said, pointing to a painting hung low on the wall. "I like the light on that one. That's Honeydew."

It was a mountain scene, all greens, browns, blues and wispy clouds. Sunshine came across it at an angle. It's a painting you might not have noticed otherwise.

But suddenly, in that light it had a certain appeal.

Janie Walsh's art sale takes place this Saturday and Sunday, June 16 and 17, 2007, from 1-5 p.m. at 1515 Buhne Street in Eureka. For more information and more of her work, visit www.janiewalsh.com.