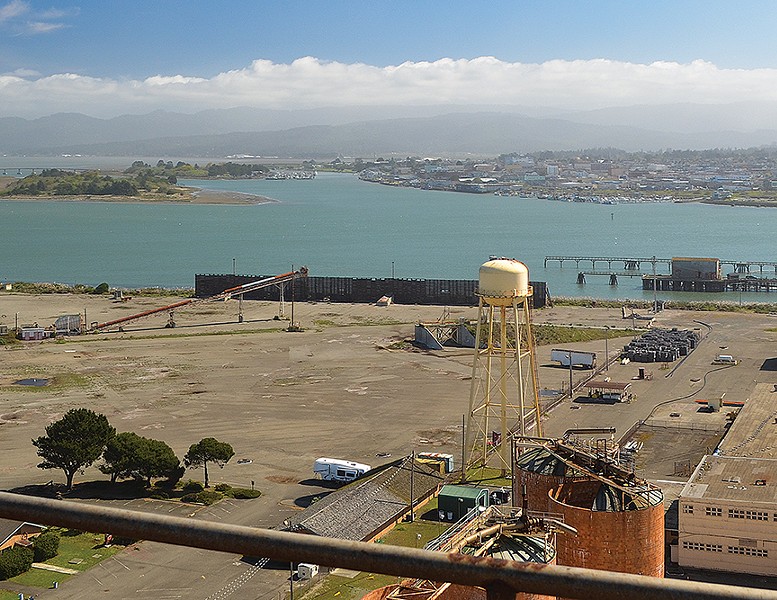 File photo What can be built on all of Humboldt's coastal dependent land? Ultimately, it's the California Coastal Commission's call.

It's a seat at one of the state's most powerful tables. With 12 members handpicked by Sacramento's top officials, the California Coastal Commission determines the future of projects proposed on some of the nation's most scenic and valuable real estate.

Reviled by some as an agency that mires development in a tangle of regulatory red tape, the commission is revered by others as a last protective stand for the state's 1,100-mile-long stretch of shoreline.

In the upcoming months, the North Coast's seat will be coming up for appointment after voters handed the current representative, Del Norte County Supervisor Martha McClure, a resounding defeat in June.

That means the door is swinging open for supervisors, mayors and city council members from the counties of Humboldt, Mendocino and Del Norte to throw their hats into the ring.

Gov. Jerry Brown has 60 days from the time McClure's term ends in December to make the appointment, according to his office. He could also remove her earlier, if he chooses.

He has four appointees on the commission, including the North Coast seat, with the Senate Rules Committee and speaker of the Assembly selecting the remaining members.

At some point, Brown will send out a request for nominees to each board of supervisors in the tri-county region, as well as city selection committees — locally, the Humboldt County Associations of Government board — which will have 45 days to send a list back. That triggers a 30-day window for Brown to make the appointment or reject the nominees. The latter option restarts the process from scratch.

Brown's Deputy Press Secretary Gareth Lacey said in an email that the office's "aim when filling any vacancy is to select the best possible candidate from a broad and diverse pool of qualified applicants."

The commission — an even mix of six elected officials and six members of the public at large — has been in the hot seat in recent months following a 7-5 vote in February that ousted then commission Executive Director Charles Lester.

Highlighting a deep divide on the quasi-judicial body, the controversial decision sent ripples up and down the coast for what some saw as a first step toward unraveling the fabric of coastal protections created by voter initiative in 1972.

It also spurred proposed state legislation centered on the conduct of commissioners, especially their contact with parties having an interest in decisions before the panel — known as ex parte communications — which have been the focus of recent news coverage, including a Los Angeles Times series.

Amid that backdrop, the North Coast selection process is set to begin.

While Humboldt Baykeeper Director Jennifer Kalt and Humboldt Coalition for Property Rights Co-founder Lee Ulansey are normally on opposite sides of the aisle, both see a potential for positive change in the shake-up.

Kalt said the media attention has placed the panel under a microscope.

"I'm really glad the coastal commission is under so much scrutiny because a lot of shenanigans went unnoticed because no one was paying attention," she said.

That included Commissioner Mark Vargas' private meeting with U2 band member David Evans, known as The Edge, before he voted to approve the guitarist's plans to build five mansions in Malibu, as well as McClure's stay in a villa owned by Don Schmitz, "a consultant who owns a Malibu winery and is a regular presence at coastal commission meetings."

Moving forward, Kalt said the North Coast needs a representative who will be responsive to all constituents, "not just project proponents."

"The three North Coast counties really encompass a lot of the most pristine remaining coastal resources in the state," she said. "Having a representative on the coastal commission who believes in the mission of the Coastal Act is critical."

Ulansey, who serves on the Humboldt County Planning Commission, said one of the main issues facing the coastal board is a lack of compromise and an inability to find middle ground.

He said Lester's firing and McClure's subsequent loss at the ballot box — she voted with the majority to determine Lester's fate — could result in both camps thinking they've won when it comes to the commission's future.

"I'm not sure that's good for the coast," he said.

When California residents voted to protect the coastline, Ulansey said, that didn't mean "taking people out of the coastal environment."

Appropriate development, he said, can help protect the environment by prompting the cleanup of denigrated lots and creating a tax base to support the stewardship of coastal properties.

"I think you need to have an open mind. If presented with a coherent argument, you need to be prepared to change your perspective," Ulansey said. "I think that is missing from the coastal commission and I think that's missing from elected officials across the country."

No one is going to get rich taking the appointment. It's a lot of work for a $100 per diem, with monthly meetings at rotating locations across the state.

Incoming 3rd District Supervisor Mike Wilson said that schedule will be a daunting task for whomever takes the North Coast seat.

"It's definitely a bigger challenge for folks in more remote areas, just from a logistical perspective," he said. "The meetings are three days a month, with travel back and forth. If you have a family and other committees and the responsibilities of whatever your elected post may be, it can be challenging. The work load is pretty intense."

Asked whether he would consider applying, Wilson replied: "At the moment, my focus is on preparing for my job as a supervisor."

Things got a little prickly the last time out.

First, in a parting salvo before leaving office, then Gov. Arnold Schwarzenegger announced in late 2010 that he intended to fill the slot being vacated by former Humboldt County Supervisor Bonnie Neely after she lost her longtime seat in an upset to current 4th District Supervisor Virginia Bass.

An uproar over the board of supervisor's initial nomination of 3rd Supervisor Mark Lovelace — at the time the only candidate to step forward — ensued.

With his decision not to seek reelection, Lovelace is no longer a contender.

In the end, a list of several names was sent to Schwarzenegger, who appointed then Fortuna Councilmember Ken Zanzi. His time was short lived. When Brown took office a month later in 2011, he removed Zanzi and sent out another request for nominations.

Some have speculated that McClure's loss in June was related to her vote to fire Lester, but it also came amid an ethics probe and a few months after a Lopez piece detailed his profanity-laced conversation with the Del Norte Democrat, in which he wrote, "There is not a sailor, alive or dead, who can match her."

More recently, she was fined $1,215 for failing to timely file six consecutive semiannual campaign statements in 2013, 2014 and 2015, according to the Fair Political Practice Commission.

McClure did not return an email and phone calls seeking comment.

While talk is circulating about possible replacements, no one has publically stepped forward.

On the Humboldt County nominee front, the potential lineup is subject to change in the November — with several council seats up for election in cities across the region.

Of the original field sent to Brown in 2011, only Bass remains in office.

"I certainly had my interest, and would be interested, but I understand there are several people in our local community who might also be interested," Bass said.

Sundberg did send his resume to the governor's office — at its request — in June, according to an email the Journal received as part of a public records request for correspondence between the supervisors and Brown relating to the coastal commission appointment.

A June 20 email from Heather Hostler, Brown's chief deputy tribal advisor, to Sundberg as well as his uncle and Trinidad Rancheria Chairman Garth Sundberg references a conference call scheduled with Tribal Advisor Cynthia Gomez for the next day to "discuss the Coastal Commission appointment."

Concerns have been raised about the Coastal Act's lack of protections for tribal resources, the need for the commission to develop tribal consultation procedures and the absence of a Native American representative in the board's 42 year history.

The appointment comes at a time when several local projects are being readied to go before the commission, including the Samoa Town Plan, the U.S. Highway 101 safety corridor project and the county's proposal to amend the Local Coastal Plan by loosening coastal dependent zoning restrictions on land around Humboldt Bay.

Bass said she would prefer a representative from Humboldt County be appointed to the seat, not because Del Norte or Mendocino lack qualified applicants but due to Humboldt's producing the majority of regional actions going before the commission.

For the time being, it's a waiting game.

"I've talked to several people who seem interested in the appointment and it will be interesting, once the process gets started, to see who is really going to step forward," Kalt said.