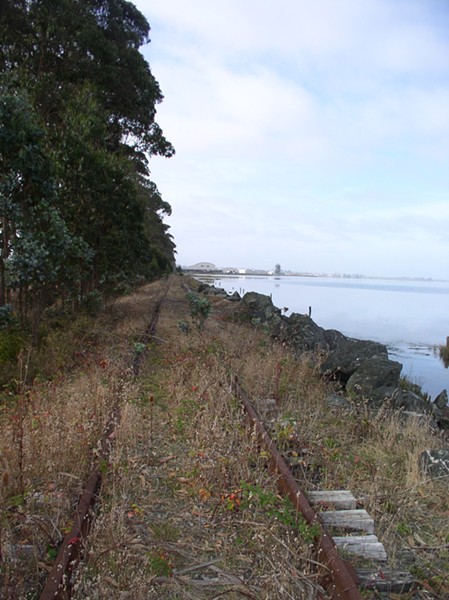 Rees Hughes On the rails, en route to Eureka

Rees Hughes On the rails, en route to Eureka, with egrets

Let me admit my bias up front. It is a shame that the railroad right-of-way between Arcata and Eureka is sitting virtually unused, a public asset that is slowly decaying, a unique resource that could serve as the foundation for a wonderful, multipurpose trail.

Unfortunately my perspective doesn't seem to hold enough high cards when I look around at the other players at the table. There is the North Coast Railroad Authority, a quasi-governmental organization that retains the rights to the railway and holds most of the face cards in this game, but fears a trail would forever kill its hopes for a railroad. There are the devoted members of the Timber Heritage Association, who have worked tirelessly toward the dream of putting an excursion train back on the tracks. There are eager bike commuters who would love an alternative to riding the shoulder of 101. There are environmentalists who are content to see the wetlands flora and fauna relatively undisturbed. And then there are people like me, who see the rich recreational potential of a rail-to-trail or rail-and-trail. The county, Eureka, Arcata, Caltrans, the Humboldt County Association of Governments, Humboldt Bay National Wildlife Refuge, and Humboldt Trails Council all have their fingers in the mix. But we are all losing from the current stalemate.

The timber barons who built the network of Humboldt County railroads would be amused by our lack of action. It didn't take much more than six months to lay the track back in 1901. The track -- from the Samoa peninsula around Arcata Bay and on south -- is the remnant of a once-grand network of railroad lines penetrating the abundant logging operations that touched virtually every acre of the moist, wooded lands around Humboldt Bay. As historians Lynwood Carranco and Henry Sorensen observed, railroads and the redwood industry were inseparable in those early days. By 1914 the Northwestern Pacific railroad line was punched through the Eel River Canyon all the way south to Tiburon, allowing mills to ship finished products by rail or sea (a role now played almost exclusively by trucks). Aside from a few motorized "speeder" car rides,the rails between Arcata and Eureka have been quiet for years and years now. Times have changed. The pulp mills have been dismantled. The once abundant sawmills have consolidated to a mere handful. The rails are literally rusting away.

Although the idea of walking the tracks from Arcata to Eureka had been percolating within me for some time, until recently my research had been limited to scanning the route as we passed by at 50 mph (honestly ... at 53 mph). The idea really gained momentum when I mentioned the possibility to my friend, Tom, whose enthusiasm and willingness to join me provided the necessary push. He suggested that we might need to consider bringing ample "vittles, emergency flares, space blankets and morphine" to ensure we were prepared for all possibilities. I did pack work gloves, pruning shears, money for lunch, and a cell phone, which proved to be sufficient.

It was a beautiful morning when we began from the east side of Arcata. The first mile through the Arcata Marsh seemed to alternate between the detritus of past and present homeless encampments and the marsh's wildlife habitat. We slowed to marvel at the work of an aspiring sculptor who had done a series of "installations" along the tracks featuring a combination of found objects and coins speared with nails. It was clear that many feet had trod the first couple of miles, and as long as you picked your way with some care, the route was relatively easy to navigate. Clearly, we weren't the first to engage in this modest act of civil disobedience. (I've been told it is considered trespassing on railroad authority property to walk along this rail line.)

We took a short detour from the tracks near Gannon Slough to follow the path created by hunters heading out to the bay. Proceeding south, the pernicious blackberry canes that were to provide our greatest challenge became more of an issue.  While much of the walk had recently been tended until we reached Bracut, it was clear that nature was quickly re-asserting its dominion over the right-of-way. The thorny, sprawling blackberries were just one facet of the attack. The persistent impact of waves had taken its drip, drip, drip toll on the embankment supporting the tracks until we reached the California Redwood Co. mill. Stretches of track had been completely undermined by the bay, leaving the ties and rails suspended in mid-air.

Despite the incessant traffic noise, the walk was surprisingly connected with nature. Our pace reminded me of author Rebecca Solnit's observation that "we think at walking speed. Walking, ideally, is a state in which the mind, body and the world are aligned." The views out over the bay reflect the changing moods that accompany the ebbs and flows of the tides, the coastal marine layer, and the movement of the sun across the sky. As we walked, egrets populated the shore, and flocks of shorebirds danced along the water's edge. It was easy to forget that just a handful of steps away was an easy hitchhike back to Arcata.

I wished that I had packed a machete to slash through the final stretch toward the Eureka Slough. Feeling intrepid, at least for a few moments, I cut blackberry canes to create a temporary opening for us to pass. It was here that we met Ron, whose full white beard suggested that he had been marooned here years earlier. "I don't drink and I don't do drugs," Ron said, "so I prefer to be away from others in Eureka." Tom and I could see the attraction of this natural place, but day after day, time would pass very slowly. We left Ron as we had found him, sitting on the rails and looking out across the salt marsh.

The bridge over the Eureka Slough is in good condition, but blocked by a high, impassable fence. Unless we were prepared to risk serious injury or a dip in the bay, our only option was to retrace our steps and use the 101 bridge to enter Eureka. Our inner chicken prevailed. We returned to the railroad to walk the final stretch along the waterfront and into Old Town, arriving a leisurely eight miles and four hours after we started.

My conclusion is that a modest pathway (minus the blackberries) between Arcata and Eureka will attract many more people who will walk, cycle or jog than will ever ride there on a tourist train, "speeder" or hand car -- and at far, far lower cost. Somewhere in the options of rail-to-trail, rail-with-trail, and railbanking, there should be a solution. It is time for all of us to be able to take a walk on the wild side (of 101).