A Walk with the Departed

A tour of three cemeteries 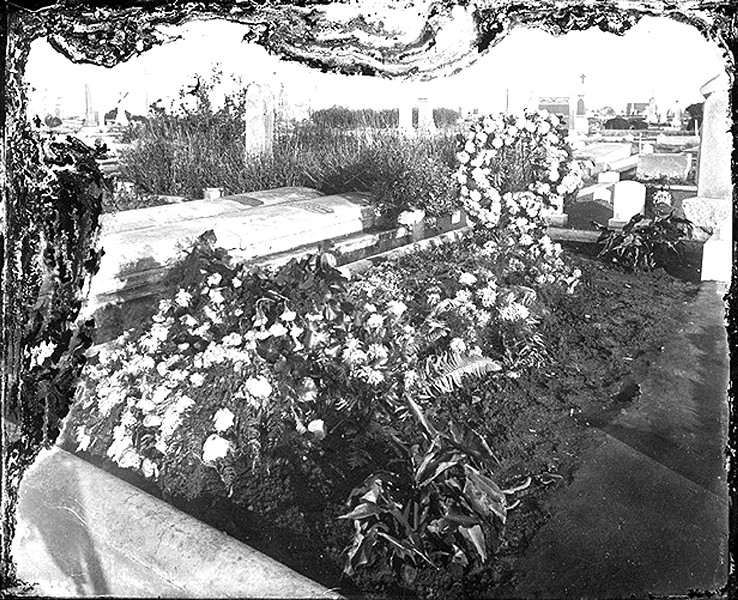 Mist floats along the grass, flowing around headstones and disappearing with a swirl as it meets the afternoon sun. Instead of searching for gauzy materializations down long hallways, I stroll local cemeteries for restless spirits.

First is lumber magnate William Coleman Carson (1825-1912). If any house should be haunted, it's his magnificent Victorian, the Carson Mansion. Perhaps he wanders the halls, muttering about labor costs or board feet, but the private Ingomar Club, its current owner, is tight lipped. Instead, I find his bones moldering not in Myrtle Grove Memorial Cemetery, where he was originally interred, but where he was moved when the tonier Sunset Memorial Park opened, being more suitable for a man who left an estate valued between $15-20 million. In 1912 dollars.

At the bottom of the hill, a funeral is taking place as we turn into the cemetery. The massive mausoleum commands the top of the hill. There, Carson and his family claim the cherry spot, just inside the right ell, in climate-controlled comfort. Chairs are set up for a service, so we tarry only a moment to take in the hushed, golden atmosphere of Carson's final resting place. No ghosts, just silence.

I move on to Myrtle Grove Memorial Cemetery, burial ground of Eureka's wealthy founders and site of Carson's original interment. I am no longer looking for the lumber king but ship owner Captain Hans Henry Buhne (1822-1894), another of Eureka's early movers and shakers.

The graveyard was handed over to the city of Eureka in 1958 and, after years of vandalism and disrepair, a recent volunteer effort has restored its grounds and gravestones ("Cemetery Rising," Aug. 31, 2017). Many markers were not in their original location, separated from their owners, broken and damaged, pieced together and reset. The mausoleums are still standing in situ, having stubbornly borne the insults of time that toppled lesser memorials. We pass hotelier John Vance's mausoleum, replete with swag and granite columns that suit the builder of Eureka's grand hotel. The next mausoleum is bereft of the aforementioned Carson, though his name still adorns a classical lintel.

A trio of weathered gravestones lead up to Captain Buhne's place of repose, the mausoleum anchoring the back corner. Each bears the mark of a Civil War veteran but not their lifespans: "20th ME INF," "39th NY INFT, 24th" and "A6 KANS CAV." The bones that lie here fulfilled their service to the nation more than 150 years ago and would more likely haunt battlefields than gravesites. Myrtle Grove is the final resting place for veterans of many wars, including an infantryman from the Spanish-American War and a U.S. Navy coal heaver who died in 1935.

The stairs to Buhne's mausoleum have the air of benign neglect, yet two open crypts hold small offerings of feathers and plastic flowers. There are no names or dates inscribed on any of the crypt faces. Perhaps the Captain planned it that way, preferring the privacy of the Buhne Building to mourn the wife who drowned in the waters that made him rich. I turn to enjoy Buhne's commanding view of his peers. No wonder Carson decamped for the preeminent location in swankier digs. C.S. Ricks doesn't seem to care about the captain's primacy, still proudly proclaiming himself "A California Pioneer of 1849" from his mausoleum, resting after building Eureka's first waterworks.

We wander and my spouse points out the Coffin family. "Ended up in the right place." We ponder over the mystery of the McMillans: William J., native of Antrim County, Ireland, is buried next to his son (also William J.), and fellow Antrim native Robert J. Clyde, all died in 1937. William J. the younger was just 17. Did they all die together? We speculate as we mourn Margaret, who not only suffered this loss, but that of her younger son when U.S. Air Corps lieutenant Archie was killed in 1944. Margaret carried her grief until 1976. Her headstone is plain, none of the florid willows and sobbing angels of the Victorians.

A massive bench catches our eye. The inscription tells a heavy tale, recounting the early settlers of Eureka who "took in" a 13-year-old Wiyot survivor of the 1860 massacre. The inset photo of her is a study of suffering, having survived the deadly attack that orphaned her only to be made an indentured servant, never allowed to return to her people. If anyone deserves to haunt us it is Silva.

Along the path, the pain of early death is everywhere. We pass tales of woe: Sophea Alice, age 3; Ian, age 6. Sharp grief chiseled into limestone that has softened with time. Someone has left a small offering on both graves. Robert, son of Joseph and Ann, aged 22. Anderson, Baby, 1900-1900. George and Mary hanging on to every second they shared with George S., died 9 years, 3 months, 26 days. The young mother who, by age 22, had lost two children before their first birthday Ralph and Clifford sleep together beneath an engraved cherub in nightdress, nestled in a crescent moon. Particularly poignant is a duo of markers: Next to Syrus B. Sinclair, proud Freemason, is a diminutive marker with a small dove that simply reads: "Our Clare." Beyond the graveyard stand rows of apartments, a sweep of bright autumn trees and Myrtle Avenue traffic. No ghosts follow but sorrow is hard to shake.

We almost miss the entrance to Trinidad Cemetery. With a quick right turn onto a dirt track up into tall trees we were secluded, removed from the living. Now this is a place of hauntings. No manicured headstones marching in low straight lines, bending to the groundskeeper's will. This graveyard is organic, moving, pushed around by massive tree roots and shifting soil.

The first graves I encounter are more recent. An eclectic mix of concrete dragons and traditional granite. One gravestone is a rock with colorful mosaics and the motto "eschewed obfuscation." I made note to look for this man's obituary. Right behind rests an enigma — a tall, dark marker for E.B. Schnaubelt, "Murdered by Capitalism," seems a guarantee spectral presence. But Schnaubelt is certain to haunt his stolen sawmill.

The Victorian trend of gating oneself off for eternity is set in beautiful wrought iron. Four unconnected posts show the short-lived chain enclosure was not worth the investment. I stroll through tall trees and undulating shadows to 20-year-old Maggie Johnnie, 1901 to 1921, with only a name to her stone. Later, my cursory search finds nothing of her. All I know of Henry John is that he shook off his mortal coil on Dec. 23, 1929. Brevity in stone matched and beaten by another gravestone with a simple low arch and L. I. engraved on its smooth top. Nearby, a gravestone obscured by lichen fascinates me. Another one is weathered to of anonymity. Would these unnamed be moved to haunt? Or would loss of name set them free?

Five concreted plots at cattywampus angles could hold restless spirits at bay by sheer weight. But just beyond them is where I find my ghosts. I thought I would find them among the long lost, like little Natie Winton, aged 6 years, 2 months, 27 days with a tombstone willow so weepy I still feel his parents' grief keenly nearly 150 years later. I was wrong.

Achingly fresh is the handsome football player who stares confidently from his school photo. Further along, the sun bleeds through a yellow plastic wand, casting a star shaped outline on the rock marking a young boy's resting place, with the scattered contents of a toy box and Halloween decorations. This graveyard is still accepting members into its club. It is the new residents that will haunt, the names I leave unwritten here. These are the spirits that float in my subconscious. I am haunted by a little boy with a star-shaped wand clutched in a sticky hand. I see him everywhere.

Meg Wall-Wild (she/her) is a freelance writer and photographer who loves her books, the dunes of Humboldt and her husband, not necessarily in that order. When not writing, she pursues adventure in her camper, Nellie Bly.