A Year After the Women’s March 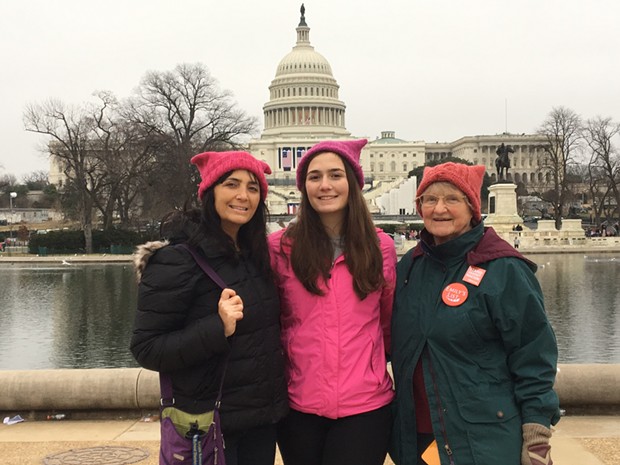 Last year at this time, I was preparing for the Women’s March in Washington, D.C. — crossing the country to don my “pussy hat” and raise my fist alongside my 80-year-old mother and my 18-year-old daughter. A loud contingent of people — both in person and on social media — asked me, “What’s the point of marching?” I found it to be an infuriating question and yet, a valid one. After all, showing up for a march is not like casting a vote in a ballot box. It doesn’t effect immediate change of law or cause any world leader to step down from a post. Would that it could! But no, the dawn after the Women’s March revealed a world seemingly unchanged. But as the recent revolution of the #MeToo Movement has shown, change had happened. And it was coming for all of us.

I can attest that on those frozen streets of D.C., a change took place inside of me. I didn’t know it then but it was as if the essential bits of my soul had been jostled in that surging crowd. As if the jigsaw pieces of my inner landscape had been picked up and thrown, never to fit in the exact same way again. Sure, I would begin challenging myself to become better informed and involved: calling my elected officials to demand change, donating time and money to causes. But just as importantly, I would begin questioning how I had raised my own daughter and confronting assumptions of my place in the world.

I was raised by my mother, an unapologetic feminist who taught me that I was equal to any man. But the reality of the world I encountered shaped me into a woman who didn’t always claim that equality — not for myself and not for my daughter. This became obvious after the Women’s March, when I looked back on a phone conversation with my daughter, right after she began college in a faraway town. She told me of the tiresome problems she’d encountered with men on the streets and even on the college campus itself. She’d been followed by men while walking to class or when returning to her car. She didn’t feel comfortable sitting to study or eat in the cafeteria because of the obtrusive and unasked for attentions of other male students. She had been catcalled by random men as she walked around town — even stalked by a car full of strangers who leaned out the window to harass her as she made her way down the street.

As she confided these facts to me, I nodded my head knowingly. I expressed sympathy and tried to pass on some of the skills that I had learned back when I was a young woman and attending college at Humboldt State University.

“Always open a book when you sit down. Then you can say that you have to study, if some guy tries to approach you. And don’t hesitate to tell them that you’ve got a boyfriend. Say it like it’s true and they will usually go away. You have your backpack with you, right? Set that on the seat next to you — especially on the bus. And be careful about smiling and eye contact … You’re a naturally friendly person but if you don’t make eye contact, they’re less likely to sense an opening and swoop in.”

Her account of being followed by a car had me gripping my phone and narrowing my eyes.
“What neighborhood did this happen in? What time of day was it? You don’t walk alone at night, do you? Isn’t there anyone you can walk with if you get out of work late?”
After interrogating her for some time, I made some jokes about being the stereotypical protective mother, offering to come down and accompany her to classes — even making a teasing remark about the leggings so fashionable among her peers: “Maybe if you put some actual pants on … Just kidding!”

And then the march happened, followed by the #MeToo movement. Suddenly, a reality that I had always adapted myself to no longer seemed tolerable. One day, I read a letter sent in to the Mad River Union by a woman whose harassment on the streets of Humboldt led her to quit her fledgling job at the Arcata Eye. This woman had been employing all of my same tricks of survival — right down to placing her backpack on the empty seat next to her. I remembered a job that I had taken as a young college student. I was in desperate need of money but the job required me going door to door through Eureka. I didn’t even make it to my lunch break on the first day. One morning’s worth of encounters with men had convinced me that I would be assaulted if I continued to knock on the doors of strangers.

I also remembered a time on the city bus long ago. I looked up and noticed a male friend of mine sliding into the seat across the aisle. I called out to him and said, “I didn’t know you rode this bus!” He looked surprised.

“I’ve been riding this bus with you for weeks,” he said. “You never look at me.”
I was chagrined and apologized for snubbing him.

And suddenly I realized the folly of the advice I had passed on to my own daughter. These were indeed my “survival skills” but what did they amount to? A mandate to lie, placate and make herself small. Fashion a bland cocoon about yourself, My Daughter, and maybe the predators won’t notice you. Restrict your movements and stay in the spaces society deems “safe.” Don’t dress in a way that invites attention. Oh, and let me model how to invalidate our experiences through humor — if nothing else, it will help distance you from your rage.
Giving those suspect pieces of advice was not my finest mothering moment. And yet it was all I knew.

After Donald Trump won the presidential election, I could not believe that women had voted for him after his “grab them by the pussy” comment had went public. I marched in D.C. to show the world that these comments and behaviors were intolerable, and I hoped that my actions would help change the hearts and minds of other women who had not yet realized the same. But I did not realize that my own heart and mind needed to change, too. I had internalized a place for myself in society — a place where it was a woman’s lot to accept harassment as a constant, as if it was a force akin to gravity: It won’t go away so women simply need to adapt. Then I had tried to pass this world view on to my daughter.
But her generation is different. She is coming of age in a post-Women’s March world, a world where women have stood up and said, “Me too” and more recently, “Time”s Up.” My daughter’s generation does not need my advice because they are leading the way. Instead of accepting harassment, they are picking up microphones in the quads and broadcasting their outrage. Through social media, they are rattling the cages of outmoded thinking, demanding a foundational change in our misogynistic culture. Survival skills may still be necessary but acceptance of the previous world order is not.

So when people ask me, “What’s the point of marching?” I answer that there is a magic that happens in your mind when you bring your body to the revolution. I will be at the next Women’s March in Eureka because I believe it takes more than sitting at our computers and liking posts to make a change. I believe that placing our boots on the street can empower our hearts. I believe the rising of our voices in the air can ignite our thoughts. The #MeToo and Time’s Up movements have shown that the Women’s March is just a beginning. The event itself is like shooting a firework into the dark and silent sky: Heads turn to watch. But the real change happens in the sparks that fly out from the center because there is no telling where those embers will land.