Stalking the abalone, and living to tell the tale 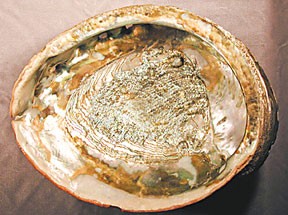 Sara and I went abalone collecting with our friend Mike last summer, but haven't gone since. If the weather and the sea were nicer I imagine we would have been hooked. I love to clam, especially on the East Coast, where the water is warm, the bottom is fine white sand easy to rake and dig in and the take is virtually unlimited. Clamming in Cape Cod is kind of like housework in warm happy water. Not so abalone collecting.

Here in Humboldt the abalone needs big rocks and lots of clean, fast moving cold water, and so they are generally in the surf or deeper water. Being a kind of snail, abalone are not bottom feeders like clams, and so can't be in the sand and sediment. All abalone graze on living macroscopic algae (large seaweeds). The adult red abalone we're permitted to collect prefer giant bull kelp, and so are always in and around very large rocks or boulders that anchor this giant seaweed. The large abalone also need deep cracks or rock overhangs to hide in, and this is where you find the big mollusks. I had little trouble entering the cold, rough water, but it was another thing to put my hand inside those deep dark fissures and crannies.

When I asked Mike about his scariest experience collecting, I expected him to mention the waves or the rocks and crevices, or perhaps a shark. He said once he had just come up from a dive in 10 feet of water when a seal popped up right in his face. "It scared the crap out of me." Mike also once stepped on a red urchin just as he started to collect. Instead of taking immediate care, he continued to search (and got his limit of three abalone). The next day the infection had spread close to Mike's knee and so he went to the hospital to have the spine dug out. Urchins have reverse barbs and tend to dig themselves in. The doctors had to administer lots of local anesthesia and use a fluoroscope (a live x-ray) to get a three-dimensional view of the wound. "They triangulated with three pins and just started cutting in. It left me with a scar and a tender heal for three months." But this was not the scariest thing Mike's encountered. That involved me. Later.

These extreme conditions have protected the abalone in Humboldt and, to a lesser degree, in Mendocino. Everywhere else in California, and probably the rest of the world, abalone are on the decline. (One species, the white, from Southern California, is the only mollusk to be listed on the federal endangered species list. It probably won't make it.)

Until the 1960s, commercial abalone fishing was big business in California, with much of the product dried for sale in Chinatown and around the world. The center for the harvest was off the central and southern coasts, where conditions were perfect. There the tidal waters are warmer and easier to enter, but the deeper waters are cold enough for reproduction. The shallow continental shelf extends far off shore, allowing pickers and divers to harvest the mollusks for miles off the coast. The first pickers were the Japanese and Chinese, whose cuisine included abalone. Commercial fishing peaked at an annual harvest of over 2,500 metric tons in 1957. Thereafter, about 2,000 tons were harvested annually until 1969, when landings and abalone abundance went into sharp decline.

Interestingly, those huge populations were really an anomaly. Before commercial harvesting really took off in the late 1800s the abalone was actually quite rare, primarily because they were the favorite food of the sea otter. At that time the only place abalone were safe was in deep crevices, where the otters couldn't reach. Even deep water didn't afford protection, as otters can dive to 100 meters, deeper than the bull kelp. It wasn't until the otter population was decimated by fur traders in the 1800s that the abalone population exploded, and then came to the attention of commercial fisheries. By 1992, commercial abalone landings were 260 tons, and then declined precipitously until 1994 (the last year measured) when 140 tons were harvested. In 1997, a commercial moratorium was instituted with a very limited recreational take permitted north of San Francisco.

Now abalone are raised in farms. Humboldt State University ran a program in the 1970s to study declining wild abalone population and also did pioneering work in abalone aquaculture (and salmon and steelhead farming, outside what is now the Arcata Marsh and Waste Treatment plant). Systems to spawn and raise the creatures were designed, and this eventually lead to a successful commercial abalone business in Crescent City that sold small (2-3 inches) abalone to the restaurant trade.

Unfortunately, an infectious disease ("Shell Withering syndrome") was discovered in the captive stock, and Fish and Game ordered the farm shut down. They were concerned the disease would enter the native population and destroy the struggling wild fishery. Now commercial abalone are raised in warm Hawaii waters where the creatures are not native (and so there is no threat from farm-centered diseases into wild populations) Because the abalone won't spawn in warm water, pumps must bring up cold ocean from 3,000 feet down.

We went out at dawn with Mike. We climbed down a big bluff (it was very steep in parts, and we had to let ourselves down a rope handhold) and then scrambled across several hundred yards of boulders to get to the collecting area. We suited up, waded out among the rocks and surf and began our hunt. For a brief time we were witness to a tide pool at sunrise, full of wondrous creatures and colors: orange sea slugs, green and purple sea anemones, spiny urchins and darting fish. We saw young rock cod. Mike showed us how to feel along the undersides and crannies for the large conical shape. You have to be careful so as not to disturb the snail. A relaxed shell is easier to pry off with a crowbar. It's also important not to wound the creature, especially if it is small and you have to return it. That's because abalone blood does not clot and the animal will bleed to death from even a small cut.

Unfortunately the fog returned and the sea was suddenly dreary and cold. Sara and I only found a single abalone. It was much too small, about 4 inches across, and so we left it where it was. The penalty for poaching can be severe. On our way back to the car the scariest thing that ever happened to Mike then occurred ... to me.

In Mike's words: "We were climbing back up the steep bluff. I had pulled myself up the rope and was waiting on a landing for Sara and Peter. Just as Sara arrived the rope went slack or twitched or something, and so I glanced down to see Peter disappear below us."

I had been cocky, hanging onto and using my arms (and not my body and legs) to pull all my weight up on the rope, instead of just using the rope for balance and support. It snapped and I went backward and landed with a thump. I lay there in shock with no pain or discomfort, then I saw Mike and Sara over me. At this point I had twitched all my limbs, found nothing wrong and said with a blush and giggle, "I'm okay." I turned around to discover I was lying about 10 or 15 feet below where I had been, with my body just short of a near vertical drop. And I was fine.