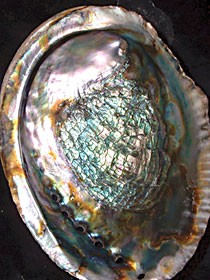 After being invited to several abalone cookouts this June, I finally asked the embarrassing question: What the hell is an abalone?

I went directly to the hosts of the cookouts, two local HSU seniors, Ben Hart and Brent Warner, who consider abalone diving one of the finest sports on the North Coast. Both scuba minors with certifications in rescue diving, Hart and Warner visibly ignite with excitement at the chance to rap about abalone.

“When I was younger, it was the only seafood I’d eat,” says Warner, who got his first one at 17. Now, when he dives, he takes as many as legal limit allows, which is three. Although it’s tempting to take more, he explains that in popular dive spots, “a game warden will pull in like once an hour and check everything.”

It’s illegal to sell abalone unless you are a commercial farmer, and even if you find a beautiful, iridescent abalone shell while diving you can’t legally sell it. This is why Hart and Warner host abalone-frying parties; they can share their wares with friends without breaking the law. (And it’s a good deal, considering most restaurants sell abalone at about $100 per pound.)

“Ab” season is from April to July, but it’s not legal everywhere. Eagle Rock, just north of San Francisco, represents the southernmost point for abalone diving, with Crescent City marking the north. However, the sport may soon be extended to the Channel Islands, which has sparked some controversy.

Ab divers must have a license, and, at the end of each year, they also have to send in their Abalone Permit Record Cards, which monitor their catches and measurements. Without these regulated limits, the abalone populations get demolished. In Trinidad, for example, abalone used to be piled three to four thick, but now, they’re pretty much wiped out. “When you do find ’em, though,” Hart is quick to quip, “you find a whole lot of them.”

Hart, who looks like a jolly Irish giant, complete with flushed cheeks and red hair, is an environmental biology and botany major who got into “ab diving” at age 13, when a friend took him to Casper Cove in Mendocino. “All they told me was that when you go down, you see a bunch of rocks, and then you see a bunch of rocks that all look the same.” These “rocks,” disguised by barnacles and seaweed, are abalone.

Apparently, the biggest abalone in the world was found in Mendocino, measuring “ass to mouth” at about 12-1/4 inches. Although they’re found elsewhere, like off the coast of Japan, Warner explains, “they’re smaller — small enough to be slurped right out of the shell.” The Mendocino abalone are much bigger, and, Warner points out, “The deeper you go, the bigger they get.”

Still, you don’t have to be a scuba diver to find abalone. Sometimes you can just wade into the water and find them in a shallow forest of kelp. Novices watch out, though, as Warner says about two people die a month during ab season, usually from being out of shape and pushing beyond their limits.

So, what’s the best way to cook abalone?

“My mom says its sacrilege to cook it any other way than breaded and fried,” says Hart, but you have to pound it out and tenderize it first, like calamari. “Otherwise, it tastes like shoe leather.” Warner adds that you can’t season it too much, because the unique flavor will be lost. “Abalone chowder, ceviche, sushi — they’ve done it all: But, in my opinion, fried and dipped in marinara is the best way to go.”

And why is ab diving so great?

Warner agrees. “We’re divers. We like being underwater and it’s a challenge. You gotta earn them.”

And what’s the size of most abalone you pick?

I’ll take his word for it.

Reagan Nail studies in the English master’s program at HSU and moonlights as a singer/songwriter.