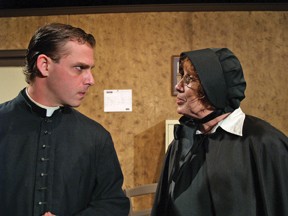 Live theatre happens in a particular time in the real world. No one associated with the North Coast Repertory Theatre production of Doubt: A Parable -- a 2004 play that concerns allegations of a priest's sexual misconduct -- could have known that it would open as the Catholic Church is facing new revelations concerning its handling of child abuse by clergy. Or that this time some observers would suggest it is the gravest crisis the Church hierarchy has faced in modern times.

Some of the cases in the news are from the 1960s. But even though this play is set in 1964 and is pertinent in some respects, it will probably disappoint those looking for complete answers on this issue. As written by John Patrick Shanley, it has some of the qualities of the topical debate plays that were popular in that era, like Inherit the Wind or Twelve Angry Men. But the word "parable" is in the title for a reason. The play concerns such philosophical issues as the nature of knowledge, doubt and certainty, and the conflicts and turmoil in the human heart.

The story pits Sister Aloysius, the stern veteran principal of St. Nicholas grade school, against Father Flynn, a progressive priest who advocates a gentler approach. She suspects him of improper behavior involving an eighth grade boy, who is also the only black child in the school. Sister James, whose observation sparked this suspicion, is a young nun caught in the middle -- trying to live up to the senior nun's standards, but sympathetic to the priest's apparent openness and enthusiasm. The fourth character is the boy's mother (Mrs. Muller), who adds more complications. Sister Aloysius makes her accusation, and the consequences comprise the rest of the play.

Janet Waddell as Sister Aloysius is convincingly scary but also complicated, and Josh Kelly as Father Flynn conveys a more youthful spirit, but also a troubled nature. Wanda Stapp effectively portrays Sister James' anguish in trying to reconcile the conflicting influence of the two alphas. Though Michelle Renee Kegan has only one scene as Mrs. Muller, she evokes powerful emotion.

Michael Thomas directs with intelligence and intriguing effects, especially in the riveting climactic scene, in which Sister Aloysius seems to get hypnotically demonic, emphasized by Katie Pratt's dramatic lighting. But when I turned my gaze to Father Flynn, his anger was just as dark -- and seemed just as emphasized by the lighting.

Though most of the play consists of dialogues between two people, it seems to be more a set of monologues, in which the actors -- perhaps intentionally -- do not engage each other. They talk past and over each other, and rarely make eye contact.

Catholics who remember this era know that it was a time of major transition: In just a few years, such traditions as the Latin Mass would be gone, and this young nun could kick her habit for more contemporary clothes. The textures of religious faith and doubt were prominent then, but these issues, like child abuse, aren't restricted to any specific group or time.

Doubt and certainty have political and judicial as well as moral consequences, and it's on the central matter of the priest's guilt or innocence that the play is often a Rorschach test for the audience, apparently by Shanley's design. As a parable, it doesn't seem to have a clear moral. The play both illustrates how dangerous allegations of such crimes can be, and suggests the shadowy machinations of cover-up.

But the play seems to take no firm position on even the facts of the priest's behavior, so for some it may feel like too clever a vagueness, and for others a mind-opening ambiguity. It may work in the territory between the unsettling and the unsatisfying. But for whatever reasons or from whatever point of view, this is apt to be a haunting 90 minutes of theatre.

Also on stage now is the Ferndale Rep production of Man of La Mancha. It's a famed musical starring Humboldt County's leading leading man, Brad Curtis, who plays the dual role of author Miguel Cervantes and his iconic creation, Don Quixote. Man of La Mancha plays Fridays and Saturdays at 8 p.m., and Sundays at 2 until April 25.

At HSU, it's the final weekend for Stefanie Hero, a witty fairy tale for all ages by Mark Medoff, directed by Jyl Hewston: Thursday through Saturday at 7:30 in the Gist Hall Theatre, with a 2 p.m. matinee on Sunday. Meanwhile, the fate of HSU Theatre Arts is being decided this month, with likely consequences for all of North Coast theatre.