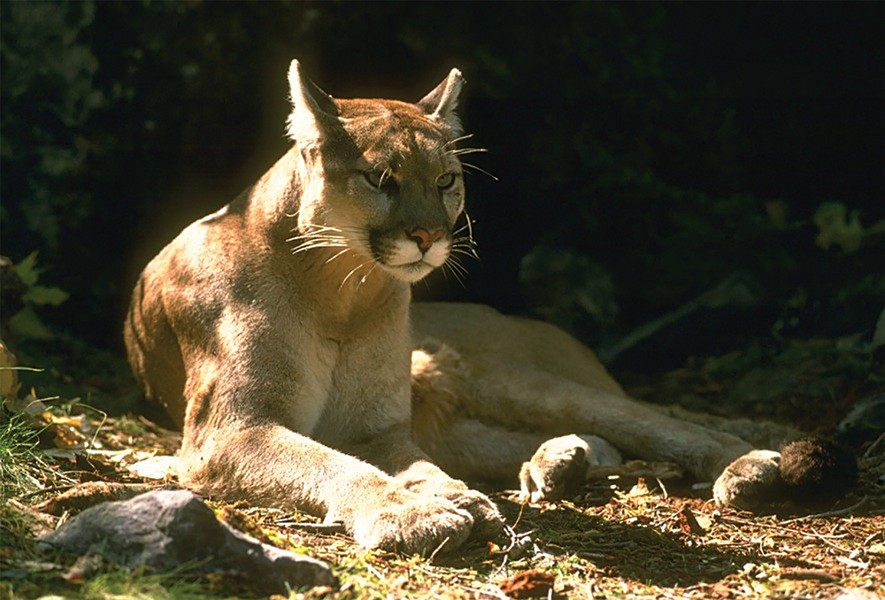 California Department of Fish and Wildlife/File A mountain lion, like this one, was protecting her cubs, not stalking a runner who came along the family in Provo, Utah.

Chances are most people have seen — or at least heard about — the now viral video of a Utah man who went out for a run in a Provo canyon on Oct. 10 and ended up face to face with a very angry mama mountain lion.

For six tense and profanity-laced minutes, Kyle Burgess kept filming with his cellphone as he backed away from the cougar, sometimes cussing and other times telling her she needed to go back to her babies, which he had inadvertently stumbled upon on a trail, at first mistaking the cubs for bobcat kittens.

(Spoiler alert: He was shaken up but otherwise fine, and had to traverse the same area of the encounter to get back to his car, according to an interview in the Deseret News, but did so this time while carrying a rock and a stick.)

While certainly scary, several wildlife experts who have commented on the chance meeting share the assessment of Humboldt County conservationist and California State Parks guide John "Griff" Griffith, who described the mountain lion's actions as a mother protecting her young.

"I know a little something about mountain lions," he says, in a recent Facebook video while taking many a media outlet to task for labeling her behavior as "stalking" in a riff that skirts the conspiracy theory line. "That was not a mountain lion stalking. That was a mama mountain lion trying to get someone away from her cubs. There is a difference."

Along similar lines, Beth Schaefer, director of animal programs at the Los Angeles Zoo, described the cougar's response as "escorting behavior" to the Los Angeles Times.

In other words, the mountain lion was making it clear to an unwelcomed visitor in her territory that it was time to get (we can only imagine she would have added a certain expletive here) out.

Schaefer noted the sudden pounces that caused many who watched the video to jump were actually what's known in the animal world as bluff charges, which cats like a mountain lion don't use if they are about to take down prey.

The truly scary part, Schaefer tells the Times, is when the mother lion disappears off-screen — which is more along the lines of a hunt — before quickly returning to the path.

Those who watch it might also note she repeatedly keeps looking back in the direction of her cubs.

The Mountain Lion Foundation, a Sacramento-based nonprofit dedicated to the animal's preservation, put out a plea soon after the video went viral asking individuals and the media to be careful in how they described the encounter when sharing the story.

"She clearly did not view him as prey," Debra Chase, the foundation's CEO, says in a post. "The behavior was meant to chase him away, which it did very well. The mother lion was reacting to a perceived threat to her young."

The foundation also states that misunderstandings about animal behavior can put not only wildlife at risk, but people as well.

"We need to counter the idea that mountain lions are naturally dangerous to humans," Chase adds. "The lion wasn't looking for a conflict and she left the area as soon as she was able."

Griffith notes that Humboldt County is mountain lion country but even though they are around us all the time, the likelihood is most people will never see one. And that is the way they like it.

Sightings do, of course, happen occasionally in both rural and more urban areas, with more than one being spotted at the forest-adjacent Humboldt State University campus over the years without incident, not to mention Cutten or Sunny Brae.

But mountain lion attacks on humans are very rare, Griffith says, and if it's going to happen, it will likely be stealthy, not the paw-pounding display the Utah cougar put on for Burgess.

"They are going to attack you usually from behind," says Griffith, a popular producer of videos about the North Coast parks, who himself went viral in the past with a posting of him dancing with a California Conservation Corp crew and hosted the online show Wild Jobs for Animal Planet.

That rear approach was the experience of former Fortuna resident Jim Hamm, who made international headlines after he barely survived a 2007 attack during a hike with his wife Nell in Prairie Creek Redwoods State Park, where she fought off the mountain lion with a pen and a branch.

Jim Hamm died a year ago this month of pancreatic cancer. He was 82.

Griffith says he's only seen a mountain lion a handful of times, but if you do encounter one, there are basic rules to follow: Make yourself seem as large as possible, make noise, keep eye contact and slowly create space away from the animal. Never run away.

In that regard, Griffith says Burgess did just about everything right, except bring a partner along for the run in a rural area, which would have allowed one person to keep acting big while another reached for a rock or other implement to chase the cat away.

Ultimately, the encounter ends when Burgess does throw a rock, which he told Griffith about after getting wind of Griffith's original video and coming on board to film a follow-up.

Burgess says she kept bluff charging every time he started to reach down and he waited until there was a bit more room between the two of them to finally grab one and send her scurrying.

The 26 year old says he hopes to turn his experience into one that can help people better understand and respect wildlife.

When asked, the avid runner says he doesn't regret the encounter.

"I'm just glad we both went out of this unscathed," Burgess says.