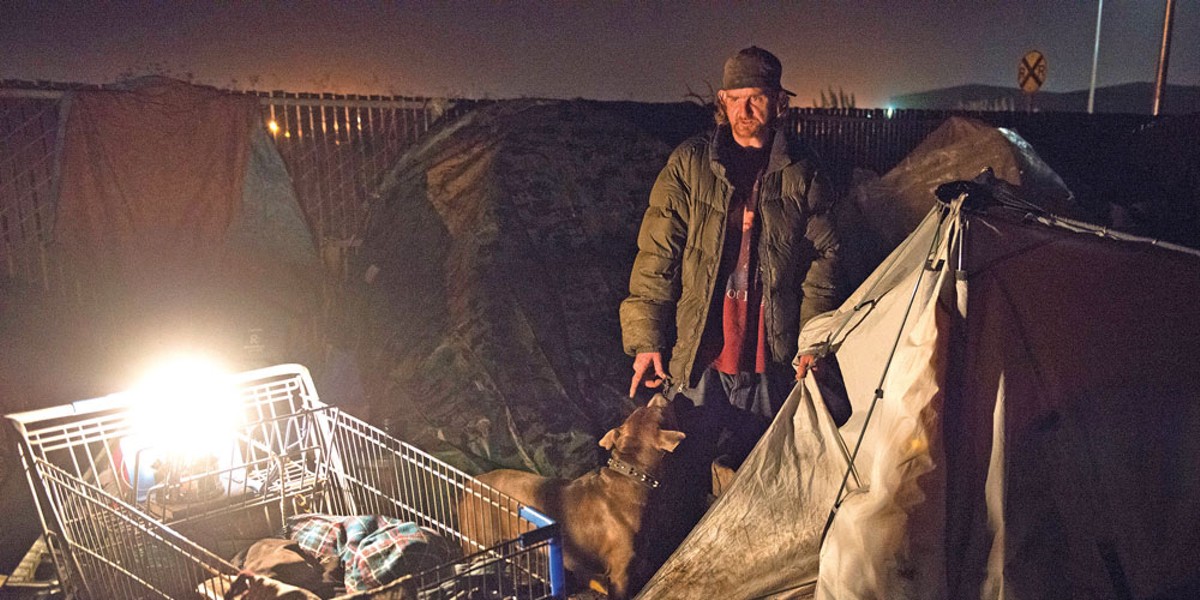 Photo by Mark McKenna Capt. Watson discusses the end of the program.

It's 9 p.m., and Anthony, who prefers to be called "Crow," is helping his friend "Bean" light a camping lantern.

"You're going to blow yourself up," says Crow. But he leans in all the same to look at the lantern, which is resting on a pallet next to Bean's tent, taking the lighter impatiently from his friend's hand.

"Well, just give me a round of fucking applause then if I do," replies Bean.

After some tinkering, the lantern comes to life, illuminating the cluttered, muddy surroundings of their makeshift camp, with around two dozen tents packed cheek to jowl in a small, fenced-in area just south of the Wharfinger Building parking lot. Music blasts from tinny cell phone speakers and from larger stereos. Dogs strain on leashes and bark. It's not a restful place. For most of the past two weeks it has rained, filling the tents with gritty mud. But it, along with two other city-owned parking lots, is the place where some 30 people have taken refuge, rotating from spot to spot every two weeks for the last six months. The program, implemented under the city's shelter crisis ordinance, allowed people to erect tents between 7 p.m. and 7 a.m. But as of 6 p.m. on Nov. 2, that policy abruptly came to a halt, with the Eureka Police Department arriving and announcing that Crow, Bean and everyone else staying in the area must leave by 9:30 the next morning.

The temporary sleeping area arrangement has been an imperfect fit for all involved, requiring a great deal of staff time from EPD and Parks and Recreation, money spent by the city for maintenance and cleaning of the areas, and challenging conditions when the winter rains began. Business owners in the areas around the camps complained of increased problems with theft, vandalism and public urination. Councilmember Melinda Ciarabellini referred to the Del Norte parking lot area in particular as a "disaster," as many people camping there stayed after the 7 a.m. deadline and left trash behind when they did move along. But the end of the program, which was intended to mitigate some of the impacts of the city's dispersement of the Palco Marsh encampment and afford people a legal place to sleep, was a shock to many.

City Manager Greg Sparks said that the decision was reached after weeks of discussion. In a press release, he cited statistics from the EPD stating, "53 percent of violent crime reports in the last quarter involved homeless transients either as the victim or suspect." (EPD was not able to provide us with statistics for the previous quarter by deadline.) Not all of those crimes happened in or around the low enforcement sleeping areas, but EPD Capt. Steve Watson said it was common for people who had committed crimes to take shelter there and "blend in" with the rest of the campers, as was the case with the Palco Marsh.

"We felt that the makeup of the people in the 'temporary' sleeping area had changed," Sparks said in an email. "Early on, they were displaced marsh folks, but recently it appears to be primarily new people — trimmers, trimmer wannabe's, and very few former marsh campers."

Crow, 29, said he has been homeless since age 17, when he left a state institution. He and Bean both formerly lived in the Palco Marsh. Bean said he had lived there for over a decade, after a head injury made it impossible for him to hold a job.

"The marsh was home," said Crow. "Everybody you see right here, we're like family."

Next to them, Trina, who also goes by "Bird" or "Mama Bird," said that she, her daughter and husband all found a home in the camp. Trina was panhandling on a street corner in Oregon when her daughter found her and took her back to California, one year ago.

"They took me in as family," she said. "I don't want to go anywhere else."

But when morning rolled around, the police came to oust those still remaining. Trina was left alone to move her belongings. She said she didn't know where her family had gone, or where she would go next.

Shelley Mack, an attorney with Peter Martin's office, said "the timing is terrible," referring to the harsh winter conditions. Mack worked on the original lawsuit against the city meant to halt the dissolution of the Palco Marsh encampment. The judge granted a temporary restaining order on behalf of 11 plaintiffs named in Martin's suit. The temporary rotating campsites were one of the ways the city complied with the judge's order to "provide shelter" for those plaintiffs.

Mack said it wasn't clear, given the temporary nature of the judge's order, exactly how long the city's parking lot program was meant to last, but "eliminating the parking lots and continuing to criminally cite people under anti-camping ordinance does not meet the standards of the Eighth Amendment."

Mack refers to the so-called "Right to Rest" opinion by the U.S. Department of Justice, which in August of 2015 argued that it was a violation of the Constitution to prosecute people for sleeping in public places "if there is insufficient shelter space in a city." Martin's office has filed a federal class-action lawsuit against the city.

But Watson, who arrived to supervise the early part of the eviction, said those staying in the temporary parking lot camps had "ample time" to use existing services, and had chosen not to do so. He mentioned that the Eureka Rescue Mission had free beds for most of the early part of November, acknowledging that many people who had pets or partners they didn't want to separate from might not want to go there.

Scott Dean, who on the day of the eviction was penning a protest sign, agreed. Dean recently moved to the area from Redding to work in a fish processing plant, and said he could have stayed at the Mission but there was no room for his fiancé on the women's side. The camps weren't great, he added. People there could be loud and violent. But he wanted to stick by his partner's side.

While the group Affordable Homeless Housing Alternatives had planned to rally a protest to the courthouse steps, most of the campers were too concerned with packing and leaving. Cleanup of the area stretched long into the afternoon.

With the temporary sleeping area program ending, those forced to leave may face tickets for violating the city's municipal code. Robert "Bud" Cochrane, an older man who also once lived in the Palco Marsh, said he has already amassed numerous tickets for camping and for "flying a sign" since the city began enforcing an anti-panhandling ordinance. He said wasn't sure where he would go. He was wearing what he called his "court clothes," but they had been streaked with mud.

"These are nasty living conditions," said Cochrane, adding that he had a sore on his face he was worried about being infected.

Watson said his officers weren't unsympathetic to those sleeping rough in the city, but ultimately it was a social issue you "can't arrest your way out of." No one was issued camping tickets on the day of the dispersement, although officers did give tickets several days later, when they returned to find people camping in the area near the Wharfinger. The city's press release included language stating that the camping ordinance would be enforced during the day and "complaint driven" at night. Watson said there had been an uptick in complaints since the end of the program.

It was, he said, a difficult balance.

"Compassion has to be coupled with accountability," Watson said in a phone call to the Journal. "Without compassion you have tyranny, and you don't want that. But without accountability you have anarchy."

As the Journal went to press, Scott Dean and his fiancé had both found room in the Rescue Mission. Crow was arrested in the early morning hours of Nov. 7 for breaking into a vehicle and being in violation of his probation.

Possibly because of his probation status, Crow had left long before the police arrived on Nov. 3. As he packed his things by lantern light he said he, too, wasn't sure where he would end up.

"I'm going to keep trying to do what I do every day," he told Journal reporters. "Survive."

Images taken by Mark McKenna the night before, and day of the eviction of 30 homeless people from a designated sleeping area near the Wharfinger Building.